Why Are France and Germany Seeking a Multilateral Alliance? 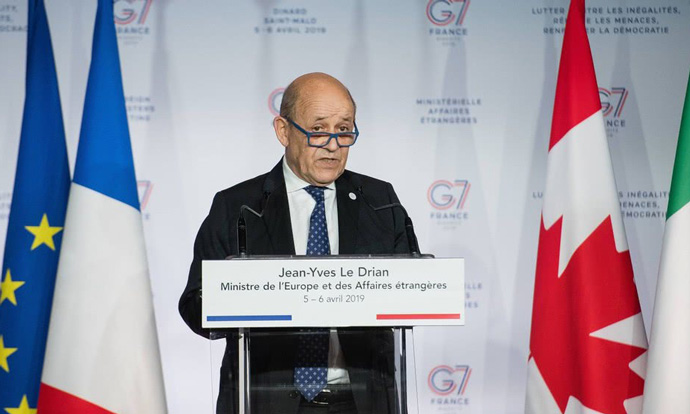 Foreign ministers from France, Germany, Canada, and Japan have reached a consensus on the importance of multilateralism and called for its preservation and revitalization in order to address global issues such as climate change, according to Jean-Yves Le Drian, the French Minister for European and Foreign Affairs.

Le Drian made the remarks at an April 6 press conference after the G7 Foreign Ministers' Meeting. Previously, he and the German foreign minister jointly called for the establishment of a multilateral alliance when they attended a meeting of the UN Security Council, planning to formally launch the alliance during the 74th UN General Assembly in September.

Chinese President Xi Jinping once said that the essence of multilateralism is to seek consultation and cooperation among the nations of the world, and first of all among major powers. Unilateralism — a renewed variant of hegemony that has emerged in the present climate — endorses the law of the jungle, putting one’s own national interests above those of other countries and the world overall, replacing international law with one’s own national laws. In this light, France and Germany seem to have proposed the establishment of a multilateral alliance for three main reasons.

First, European countries such as France and Germany are victims of unilateralism. After President Donald Trump came to power, he waved a unilateralist stick at European allies, following the principle of "America First." The United States claims that European allies have taken advantage of the US on defense issues, and now demands that they increase defense spending and share the burden the US has borne. Under the pretext of maintaining "national security," the United States imposes import tariffs on steel and aluminum products from its European allies, provoking trade friction and suppressing the European economy just as it showed some signs of recovery. Recently, the United States has threatened to impose new tariffs on $11 billion of EU products ranging from aircraft and helicopters to sensitive agricultural products such as cheese and wine as a result of EU subsidies to Airbus. Unilateralism has led to tensions between the United States and some European countries, including France and Germany.

Thirdly, unilateralism hinders the reform and improvement of global governance. The United States has blocked the World Trade Organization (WTO) from initiating the selection process for new judges. The EU and several WTO member countries have questioned the United States and urged it to "unbind" the current deadlock on candidates for the WTO Appellate Body. But the United States has refused to do so. At the end of this year, the WTO Appellate Body will have only one judge, and it will face the danger of suspension. As the United States pursues unilateralism, the normal operation of multilateral mechanisms such as the WTO is not guaranteed, and many urgent problems cannot be dealt with in a timely and effective manner under the usual system — let alone the much thornier task of reforming and improving global trade governance. Global issues such as climate change, migration, and cyber security, which plague the international community, need multilateralism and global cooperative governance to be properly addressed.

Unilateralism has disrupted relations between the United States and European countries such as France and Germany, harming the transatlantic alliance, multilateral mechanisms, and global governance. France and Germany proposed the establishment of a multilateral alliance, which is intended to unite more countries to meet the challenges of unilateralism and safeguard their own interests and the global governance system itself.

China has always been a firm defender, supporter and practitioner of multilateralism. When President Xi Jinping visited France in March, he met with French President Emmanuel Macron, German Chancellor Angela Merkel, and European Commission President Jean-Claude Juncker. The four parties pledged to support multilateralism. The initiative by France and Germany to establish a multilateral alliance is a welcome step as it conforms to the trend of the times and helps to maintain and strengthen multilateralism.

MultilateralismWorld OrderGlobal GovernanceG7G7 Summit
printTweet
You might also like
Back to Top
CHINA US Focus 2022 China-United States Exchange Foundation. All rights reserved.