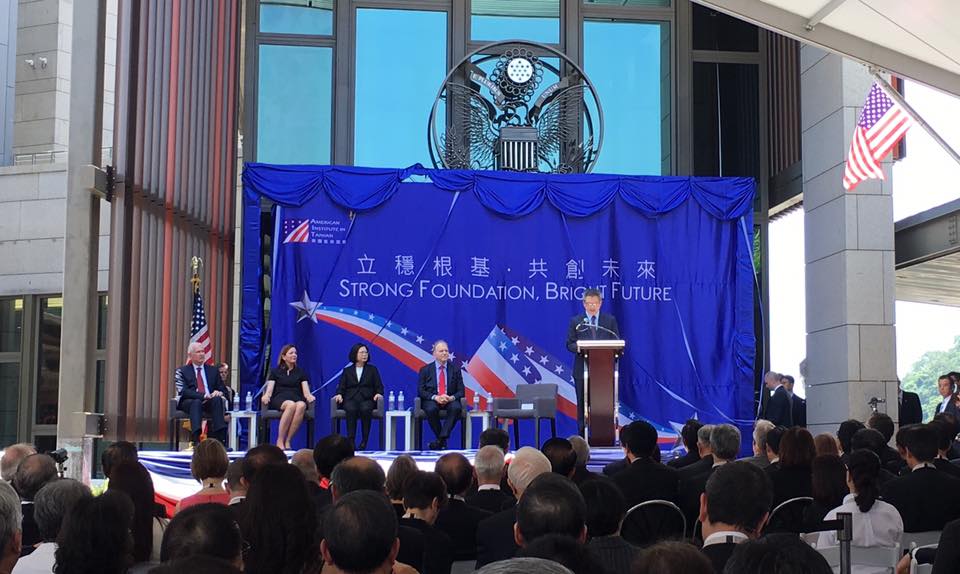 The Chinese mainland has voiced grave concerns at the opening of the new office of the American Institute in Taiwan (AIT), as the Taiwan authorities may seek to alter the status quo through the opening ceremony, and consequently, the US may show implicit support or acquiescence to such behavior, generating further complexity and open tension in cross straits relations that may call for moves from the Chinese mainland in both rhetoric and action.

First, since taking office, the Democratic Progressive Party (DPP) has been pushing for changing the status quo, with the tacit protection and accommodation of the US, and the opening of the AIT new office may be a step further down that road. The DPP has been seeking to overturn the 1992 Consensus, on the grounds that it was an agreement between the Kuomingtang and the Communist Party, as opposed to one that is between the DPP and the Chinese mainland, hence a so called “new consensus” is called for. In the case of a company, it is like the new board of directors jumped at the first opportunity to rescind the commitment made by the previous one. Such attempts to change the status quo is unacceptable and worrisome for the Chinese mainland, and all the more so as the DPP is supported by some forces in the US. The 1992 Consensus is the political foundation between the Chinese mainland and the Taiwan authorities, not just any agreement between two political parties. With the unjustifiable support from the US, the DPP went further to seek “de jure independence” and break new ground with the US in their engagement, for example, Taiwan leader Tsai Ing-wen had a phone call with then President-elect Donald Trump.

Second, the Trump administration has been playing fast and loose with its Taiwan policy since taking office, echoed by successive adventurous bills to alter the status quo in the US Congress, which combined to embolden the DPP to “fish in troubled waters”, to the grave concern of the Chinese mainland. The establishment is more rational in its decision making process, while the Trump administration could be capricious. Let’s not forget President Trump once toyed with idea of using the Taiwan question as a bargaining chip to leverage against China, which, if it happens, may well push China to change its constitution and party documents in a way akin to war-time urgency. Second, the Formosa Association for Public Affairs, which is closely linked with the DPP, has been active in the US. When the DPP has more access to US Congressmen, who will then pay more visits and interact with the DPP authorities, but only have modest exposure to Chinese mainland, these US congressmen may come to a false conclusion that the Chinese mainland is flexing its muscles against Taiwan, or that Tsai Ing-wen’s “patience” is not met with good faith engagement from the mainland. Third, thanks to its majority in the legislative council in the wake of the 2016 local legislative election, the DPP has been using its majority against the opposition parties, backed by US faith in Taiwan’s electoral system, to push Tsai Ing-wen to take further steps towards “Taiwan independence”. Tsai’s phone call with President Trump took place after the Taiwan legislative council questioned Tsai over “foreign affairs” spending.  More importantly, the US’ tacit support for these actions are alarming, forcing the Chinese mainland to take defensive measures to uphold the “One China” principle.

Third, the new AIT office may carry symbolic significance, prompting Taiwanese authorities to push for “independence”. What keeps people second-guessing is the fact that the AIT new office is opaque, from its design and construction process all the way to the opening ceremony. In addition, the lease agreement for the premises was signed on December 22, 2004, with the lease period running for 99 years starting from January 1, 2005. It generates speculation that the US may involve Taiwan in its “Indo-Pacific” strategy and reexamine cross strait relations. The US government also made elaborate personnel arrangements for the AIT. Co-chairs of the US Congressional Taiwan caucus attended the AIT office opening ceremony. Before the opening ceremony, pro-DPP media in Taiwan interpreted the ostensible recognition from the US based on common values as evidence of US support, and sent the message to the mainland that Taiwan would seek to change the status quo and push for independence. That warrants serious examination. It may end up as a tool for the DPP to push its pro-independence agenda.

The 19th Party Congress report made a new statement on reunification, but “peaceful reunification” remains the core message. The Chinese mainland has every desire to make it happen, and has every desire to maintain the status quo. That said, should the US seeks to hollow out the “One China” principle with the AIT opening episode, that will be a whole different story.