Xi-Obama Meeting: US-China Relations off to A More Promising Start 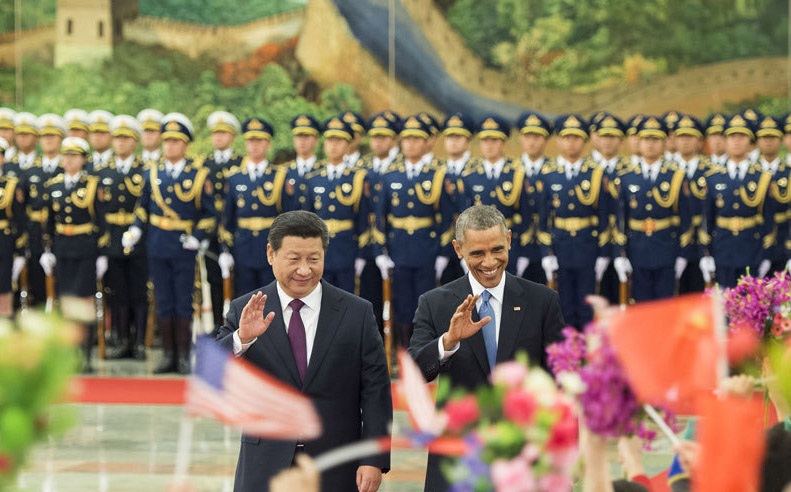 After more than a year of increasingly scratchy relations between the United States and China, Presidents Barack Obama and Xi Jinping managed to strike a markedly improved tone and announce some accomplishments this week. Meeting in formal and informal settings on the sidelines of the Asia Pacific Economic Forum (APEC) leaders meeting in Beijing, the two acknowledged the need to manage inevitable differences and frictions while offering inclusive opportunities for future cooperation. Whether this was a tactical adjustment for the purposes of this meeting –giving prestige to Xi and his government as host, or salving the political wounds of a recently humbled Obama – or something more lasting, will be tested in the coming months. Insider expectations are tending toward the tactical, if not cynical.

Most of the announcements out of the meetings were fairly well known in advance, including an agreement to extend business and tourist visas to ten years, agreement to work for removal of tariffs on electronic goods under the Information Technology Agreement (ITA), framework agreements for confidence building measures (CBM) between the two militaries, cooperation between domestic security organizations, and an eye-catching joint announcement of goals to reduce or cap greenhouse gas emissions over extended timetables. These are for the most part solid achievements that can prove mutually beneficial and self-reinforcing. The climate change goals for 2025 and 2030 will depend on future leaders and so by definition are squishy.

In parsing the language of the leaders’ statements, there were signs of a mutual awareness of the need to address sources of mistrust. Apparently sensitive to commentary about China trying to reduce U.S. influence in the Asia-Pacific region, Xi Jinping tried to frame his call for an Asian security mechanism, the Asian Infrastructure Investment Bank (AIIB), his funding proposal for new “silk roads” for Central and South Asia, and the Free Trade Area of the Asia-Pacific (FTAAP), to convey “an inclusive and cooperative spirit,” and not excluding the U.S.

Xi reiterated his call for a “new model of major country relations between China and the United States.” He detailed principles for “non-confrontation, non-conflict, mutual respect, and win-win cooperation.” Through his words and body language, Xi sent a message to his own people that appeared very different from the largely negative image of the U.S. that dominated China’s media over the past year. This begs the question of why official behavior and media commentary are not in synch. Are there differing views within the Chinese leadership? Are there separate messages for domestic and foreign consumption? Which narrative conveys China’s strategic intent?

For his part, President Obama struck similar themes in briefer fashion, but seemed occasionally to be looking over his shoulder to anticipate reactions at home by touching on the sensitive issues of human rights, the Hong Kong protests, trade and jobs, Tibet, and Taiwan. When questioned, Obama reiterated that the U.S. wants to “debunk the notion…that our pivot to Asia is about containing China,” which has been a nearly universal theme in China in recent months.

In anticipation of hosting the APEC meeting, China has reduced tensions with some of its neighbors over the past few months, seeking to create CBMs with Vietnam, Japan, and the U.S. A new dialogue mechanism was established with Hanoi. Just in time for APEC, Japan’s national security advisor Shotaro Yachi , negotiated an ambiguous four part statement on Japan-China relations with State Councilor Yang Jiechi, that permitted a cool, twenty-five minute meeting (without national flags in the background) between Xi and Prime Minister Shinzo Abe. This has at least temporarily muted the war of words between Tokyo and Beijing.

The biggest unanswered question emerging from the Obama-Xi meetings is whether the adjustments and assurances China has made to its foreign policy posture are tactical or strategic. If tactical, we should know within a few months as inevitable frictions reemerge over conflicting territorial claims and resource extraction. China’s media themes will also bear close scrutiny to see whether what the leaders said this week are repeated and developed, or just fade into memory.

If, however, China’s leader has decided that he has made his point to China’s neighbors and the U.S. about Chinese claims and rights in the region, and tensions can now be relaxed, this could have strategic significance. Frictions with American allies have been propelling Washington toward increasing strategic competition with Beijing. Avoiding this outcome was the expressed purpose of last year’s consensus at the Sunnylands informal summit in Palm Springs, summarized in the phrase “new type of major country relations.” Resuming a cooperative and peaceful approach to the management of disputes could mark an important turn away from the current trend toward strategic competition that could prove risky and expensive for all parties.

Even if a strategic decision has been reached in Beijing, which Washington will certainly welcome, it will not be easy to make it stick. Nationalism has been fanned to a high degree in China, and scholars and officials alike are quick to see American plots behind every development adverse to China. China’s declaration of an Air Defense Identification Zone in Northeast Asia was clumsy and unnecessarily provocative, suggesting a lack of appreciation for the need for big states to avoid surprising powerful interests.

In the U.S., the Obama administration has an uneven track record for managing tricky issues with China, such as the unproductive indictment of Chinese army officers for cyber theft this past year, and a tendency to be reactive rather than proactive when new frictions arise. With a presidential election on the horizon, and leading Democrat Hillary Clinton already striking a skeptical tone about China, new frictions could easily become a political football again.

We are entering a testing period for U.S.-China relations. At least it is off to a more promising start than just a few months ago.