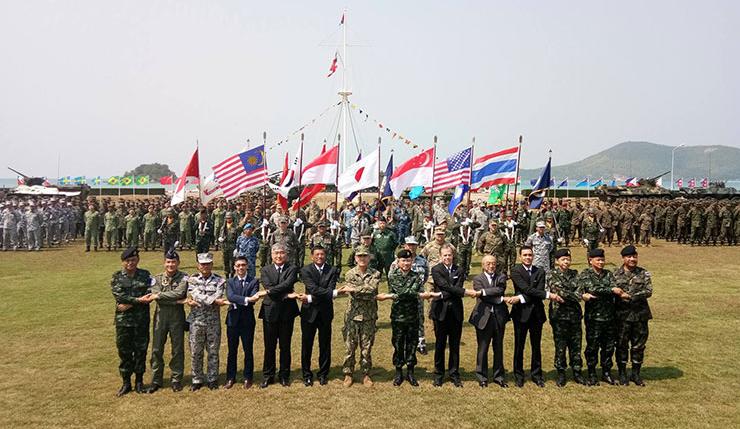 February 14 opening ceremony for Cobra Gold 2017, the largest multilateral exercise in Asia co-hosted by Thailand and the United States.

According to a Reuters report in June 2017, officials from Japan, India, Australia and Vietnam met at the sideline of the Shangri-la Dialogue in Singapore to discuss the feasibility of forming an alliance. This news may be just a speculation, but if true, the event will be the most recent example of the growing defense ties among US allies and partners in the Asia-Pacific.

The past decade has witnessed an explosive growth of defense ties among Japan, Australia, India, South Korea, the Philippines and other Asian allies and partners of the United States. Take Japan for example. Japan has signed agreements with South Korea and India to share military intelligence and an agreement with Australia which makes mutual provision of ammunition possible. Trilateral defense dialogues have been regular among the United States, Japan, South Korea, Australia and India. In addition, new proposals include Japanese Prime Minister Shinzo Abe’s suggestion of a Quadrilateral Security Dialogue and later a Democratic Security Diamond, both assembling Japan, Australia, India and the United States. Some scholars have advocated building a series of middle-power coalitions in the Asia-Pacific with Australia and India as the core.

The closer defense ties among these countries have gained momentum from the shifting dynamics of Asia-Pacific security, especially those regarding China and the United States.

On the one hand, US security commitments are not as firm as before. Since the Obama era, the United States has started a strategic retrenchment, which has stirred concerns in Tokyo, Seoul, New Delhi and other Asian capitals. President Trump’s demands of more burden-sharing by the allies and partners, along with his inclination to improve relations with China and Russia, has horrified some old strategic partners. Thus, alignment has become a natural response to potential US abandonment of the allies and partners.

On the other hand, China is rising. With the double-digit growth of the defense budget, the construction of the first home-built aircraft carrier and the development of such advanced weapons as anti-ship missiles, the military gap between China and the US is quickly narrowing. Under such circumstances, US security commitments do not seem to be as credible as before.

In addition, the United States has encouraged closer ties among its allies and partners. As middle powers, Japan, India Australia and South Korea are able to counterbalance China if aligned. If combined, the defense budgets of the four countries nearly equal that of China. Therefore, expecting its allies to assume more burdens in defense, the US is happy to see the alignment of these countries. In early 2014, when Japan and South Korea quarreled over a history textbook, President Obama made great efforts to bring the two leaders together for a summit.

Despite all the above, the close defense ties among US allies and partners have not evolved into significant formal alliances. The failure can be attributed to such factors as disputes among these countries, diversified threat perception and domestic politics in flux of these countries, but the key factors are two unchanged geopolitical facts in Asia.

First, the US has not yet left. President Obama and his aides repeatedly underlined US interests in the Asia-Pacific and its commitments to allies and partners. In the current administration, Vice President Pence, State Secretary Tillerson and Defense Secretary Mattis all did so when visiting Asia. Their commitments were accompanied by increased investment in the region, the most recent example of which is the Asia-Pacific Stability Plan, designed to facilitate more military exercises, weapons and troops in the region. With US commitments still in place, its allies and partners will have not too much enthusiasm for building alliances.

Second, China has not constituted a real threat. Despite its firm positions in the South China Sea, China just conducts land reclamation and deploys defensive weapons on the islands and reefs it controls, which is definitely not aggression. What is reassuring is the successful diplomatic efforts by China targeting the neighboring countries. By actively conducting defense exchanges and cooperation with its neighbors, it has, to some extent, dissolved their concerns.

At the same time, China is providing opportunities of development to Asia-Pacific countries. China is the largest trading partner of Japan, India, Australia, South Korea and ASEAN. These countries would not form an alliance to openly counter China at the expense of trade ties with China.

In the foreseeable future, as long as the US remains in the Asia -Pacific, and China sticks to its peaceful foreign policy, US allies and partners will be reluctant to build informal or formal alliances. The most likely scenario is ad hoc coalitions on specific issues. For example, Japan and South Korea continue to have close coordination with regards to the North Korean nuclear issue, while their positions on the South China Sea remain fundamentally different.

In today’s world in which national interests are closely intertwined, it has been out-dated to build alliances that trust one’s fate to a specific state or a group of states. On the contrary, interests can only be maximized through strengthening defense ties and inclusive partnerships. The closer defense ties among US allies and partners in the Asia-Pacific are not only aimed at counterbalancing China, but also aimed at hedging the uncertainty brought about by the potential departure of the United States from the region and the rise of China. In other words, it is the current fuzzy state of geopolitics in the Asia-Pacific that results in the reluctance of these countries to build old-fashioned alliances.