Courting India, the Philippines and Others to Maintain U.S. Hegemony in South China Sea

Fourteen years after the last American military facility closed in the Philippines, United States airplanes and naval ships are back in the country. The deployment came at the end of a 10-day U.S. – Philippines joint military exercise in the South China Sea (SCS) during early April. Amidst overlapping claims in the SCS the two started conducting joint naval patrols last month, contesting Chinese territorial claims. The Philippines had earlier announced that it would allow 5 military bases to the U.S. under a defense deal signed in 2014. 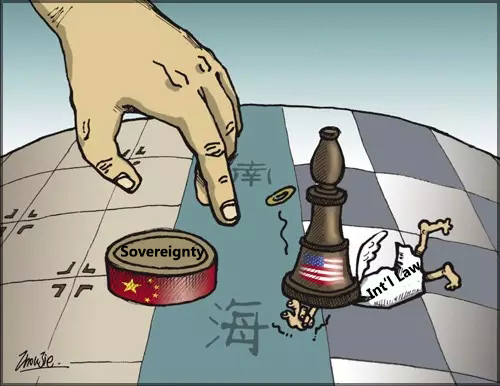 U.S. involvement sends a message that it will work with its allies to pushback on Beijing’s expanding presence in the disputed SCS. But it also reinforces belief amongst the Chinese and many others that U.S. is only raising military stakes to thwart China’s rise.

China has condemned the U.S. moves as “the embodiment of Cold War thinking and not conducive to peace and stability.”

With almost a third of global crude oil and over half of global liquefied natural gas (LNG) passing through the SCS each year, the struggle for its control is understandable. The SCS is also known to be rich in marine and hydrocarbon resources. Much of China’s own maritime business is conducted through this Sea.

At stake is the dominant U.S. position in the region, which is being challenged by China’s rise. The U.S. has therefore adopted an increasingly strident posture in support of China pushback.

China is also wary of U.S. courting India in this endeavor, which despite growing economic relations with China is also jostling for political space in the region. After a decade of negotiations India and the U.S. announced a logistics support agreement during the U.S. Defense Secretary Mr. Ash Carter’s recent visit to India, just before visiting the Philippines. India has, for now, refused to be a part of U.S. led naval patrols into the SCS. India’s naval engagements with Viet Nam, Australia and Japan, encouraged by the U.S., are also of concern to China.

Since announcing the Pivot to East Asia policy in 2012, U.S. actions of perceived containment of China have become more pronounced. Stoking fears of China amongst the Southeast Asian states, the U.S. continues to beef up its military presence in the western Pacific. The Obama administration has a declared policy of deploying 60 percent of their ships and aircraft in the Pacific by 2020, up from the current 50 percent. The U.S. sponsored Trans-Pacific Partnership (TPP) specifically excludes China.

As China and the U.S. jockey for regional dominance, ASEAN faces the challenge of acting together as a bloc or individually in self-interest. These smaller states find it difficult balancing between the U.S. and rising China.

Understanding need for regional calm the People’s Daily wrote on September 5th 2013 that China’s good neighbor policy towards ASEAN is not a measure of expediency, but a long-term strategic choice.

President Xi Jinping of China went further and declared in Singapore on November 6th, 2015 that, “there has been no problem with maritime navigation or overland flights, nor will there ever be in the future.” But Mr. Xi also repeated that the islands in the South China Sea have been Chinese territory since ancient times and China will uphold its sovereign and maritime interests. No one questions China’s tenacity.

The Chinese narrative is all about restoring China to its dominant role in the region after two centuries of western abuse and humiliation. Now, when she is poised to become the leading economy in the world, China wants to exercise all levers of power to eliminate repeat of western domination.

It is true that the global order based on the overwhelming U.S. power, has maintained peace in the SCS. But the SCS is China’s own front yard, sovereignty over which is necessary if the world is to be brought to accept China’s ascending status. Since that will be at the U.S.’s expense the U.S. wants to maintain status quo.

Many believe that the U.S. first creates anxiety and fear, amongst the Southeast Asian states, over China’s alleged ambitions and then harnesses their insecurities to build a coalition to achieve its strategic objective of containing China.

The danger is that there is a limit to which some of these states will go to jeopardize their relations with China, merely to satisfy American strategic interests. Ideally they would not want to be forced to make a choice between the U.S. and China.

As China increases its economic and political leverage in the region and beyond the U.S. military posturing is likely to increase. And the U.S. seems to betting on China backing off in the face of mounting U.S. presence. But China could also react to these moves by taking a more aggressive stance, challenging American actions in the region where China needs to establish its presence to protect its sea-lanes and for its power projection.

Never before in history have the two leading powers been so interweaved economically. It is in everyone’s interest to see that this co-existence continues.

This is not the ‘end of history’ – it will roll on. Like the centuries attributed to other European powers, the American century will end too. The question is not ‘if’ but ‘when?’