On Tip-toe in the South China Sea

The South China Sea is where Chinese great power ambitions meet American military power. The Pentagon’s 2016 Annual Report to Congress on China’s military states that China has added more than 3,200 acres to the seven South China Sea sites it occupies.[1] Whereas aircraft carriers have long provided the U.S. naval primacy as floating islands, China is creating its own artificial islands, complete with deep channels, harbors, berthing areas and airfields, all manned by thousands of troops, to counter that primacy. 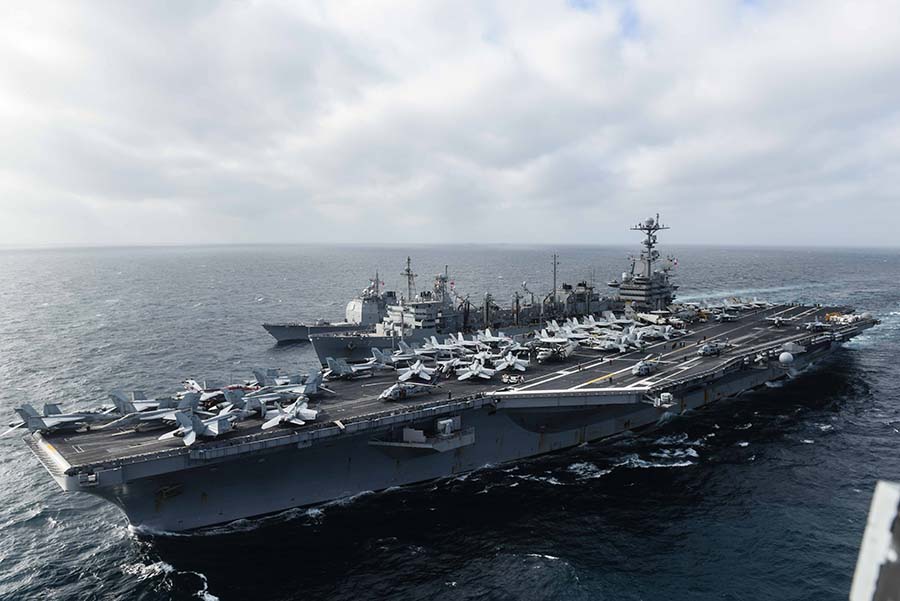 While there are a number of political and legal issues regarding the South China Sea involving multiple countries, U.S. and Chinese emphasis most immediately needs to be on preventing military confrontation—in any one of the many ways that it might be triggered. While there are positive signs on both sides regarding the need for addressing and priority of that task, the politics of posturing must not be allowed to get in the way. Communication, promotion of regional risk-reduction measures, and tamping down intemperate actions will each be key to maintaining stability.

Sovereignty disputes over South China Sea territory involving China, Taiwan, Vietnam, Brunei, Malaysia and the Philippines have been brewing for years. With the exception of China, the involved countries have based their respective territorial claims on international law arguments, while China has also invoked historical claims with its nine-dash territorial line put forth even before its modern-day Communist lineage. Most relevant now is a dispute between China and the Philippines over China’s right to expand to areas traditionally used by Philippine fisherman, which the Philippines submitted to a Hague tribunal for arbitration in 2013. Posturing for an expected mid-2016 decision, China appears both ready to reject a legal settlement in favor of the Philippines, and tacitly ready to accept the political momentum of a legal ruling that goes its way. A May 2016 editorial in the Global Times, an organ of the Chinese Communist party, referenced the dispute, stating “it seems that as we get closer and closer to a verdict for arbitration on the South Sea, the American media wants to use the time to pressure and slander China.”[2]

China has also lobbied other countries for support of its position,[3] as part of the political posturing being undertaken by both sides and their supporters. At stake in the Philippines-China case specially, and more generally, are not just rights to potential oil and gas reserves in the region, but also Chinese potential to restrict or even close vital shipping lanes, and more generally, interject itself into freedom of navigation activities. As a champion of freedom of navigation rights, that is a major concern to the United States.

The U.S. has not been hesitant in using a show of naval force to demonstrate it will not be deterred from what it says are normal operations in the region. That has led to an escalating number of close encounters between the Chinese and U.S. militaries. A U.S. naval strike group led by the aircraft carrier USS John C. Stennis conducted what it called “normal” operations in the South China Sea this spring, often followed by Chinese warships. In May, the USS William P. Lawrence sailed with 12 nautical miles of Fiery Cross Reef,[4] claimed by the Philippines, China, Taiwan and Vietnam, but occupied by China. China launched two navy jet fighters, one early warning and three ships to track and warn off the U.S. ship.

China analyst Bonnie Glaser has cited other, similarly contentious, encounters that have occurred not within the South China Sea, but within the Chinese 200 nautical mile Exclusive Economic Zone.

China routinely intercepts U.S. reconnaissance flights conducted in its EEZ and periodically does so in aggressive ways that increase the risk of an accident similar to the April 2001 collision of a U.S. EP-3 reconnaissance plane and a Chinese F-8 fighter jet near Hainan Island. A comparable maritime incident could be triggered by Chinese naval vessels harassing a U.S. Navy surveillance ship operating in its EEZ, such as occurred in the 2009 incidents involving the USNS Impeccable and the USNS Victorious. The large growth of Chinese submarines has also increased the danger of an incident, such as when a Chinese submarine collided with a U.S. destroyer’s towed sonar array in June 2009.[5]

U.S. reconnaissance aircraft and ocean-surveillance vessels are not armed. Consequently it is not unreasonable to assume that Chinese behavior considered dangerous toward them might draw a call for armed escorts. Misunderstanding, miscalculation or even simple misinformation between armed U.S. and Chinese could result in an exchange of fire, and inadvertently a military confrontation that could quickly spin out of control. 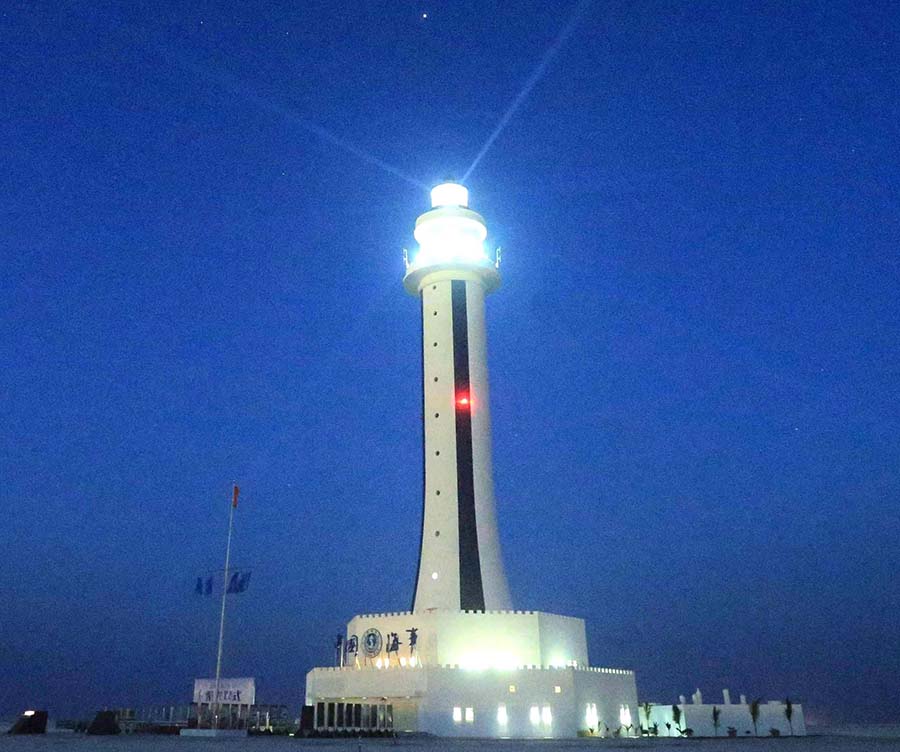 On April 5, 2016, China’s Ministry of Transport held a completion ceremony for the construction of a lighthouse on Zhubi Reef, of Nansha Islands in the South China Sea. [Xinhua Photo]

The U.S.-China relationship, already important to both countries, regionally and to the global economy at large, is expansive and growing. If that relationship were to sink, so too might globalization as well, and with it the potential for economic growth. Consequently it is in the strategic best interests of both countries to find peaceful solutions to what will inherently be contentious and competitive issues between a rising and ruling state.

Tough talk from both countries is to be expected for both domestic political consumption, and as signals to each other when “lines” are being approached that won’t be tolerated. China cancelled a port visit by the Stennis to Hong Kong subsequent to the strike group patrolling in disputed waters, saying only it was ‘inconvenient.”[6] But continuing discussions and interaction is essential. Soon after the destroyer traversed Fiery Reef waters, China said it wanted to talk.

A request from the Chinese army for a videoconference between General Fang Fenghui, chief of the Chinese joint staff department, and Marine General Joseph Dunford, U.S. Chairman of the Joint Chiefs of Staff, was positively received in the U.S. The first of what may be more of those videoconferences took place on May 12, 2016.[7] Communication channels are important for routine discussions and in times of crises. In the past, U.S. confidence in the capability to conduct crisis communications and the willingness of the Chinese to even participate has been tenuous. During the teleconference General Dunford affirmed with his counterpart that if called, “someone will answer and listen.”[8]

Communication at all levels is essential to avoiding unintended consequences to actions intended as innocuous. The Navy Times published an account of communications between U.S. and Chinese ships during the Stennis’ recent interactions with the Chinese Navy, which were described as professional and non-threatening. “’Based on the bridge-to-bridge communications USS Chung-Hoon had with the [People’s Liberation Army-Navy] ships, it is clear that the Chinese Navy prides itself on professional communications and interactions,’ said Cmdr. Tom Ogden, commanding officer of destroyer Chung-Hoon.”[9]

Vice Admiral Joseph Aucoin was welcomed to Shanghai shortly after the Stennis was turned away from Hong Kong, to hold talks with his Chinese counterpart later this spring to discuss steps to increase communication and military-to-military engagements. During a visit to China, sailors from the command ship Blue Ridge were scheduled to engage in sports with their counterparts. While these may seem small steps, they are hopefully a prelude to bigger steps.[10]

Increased communication would be useful toward implementing the Military Maritime Consultative Agreement (MMCA) set up in 1988. That agreement was intended to act much like the U.S.-Soviet Incidents at Sea Agreement (INCSEA) in establishing “rules of the road” to reduce the risk of an accident between ships and aircraft. While the MMCA has not been successful to date, the time might now be ripe.

There are also multilateral mechanisms and procedures already in place that might be more fully utilized. The Western Pacific Naval Symposium (WPNS), founded in 1988, brings together naval leaders from the United States, China and all Association of Southeast Asian Nations (ASEAN) members except Laos and Burma on a biennial basis to discuss maritime security. Glaser explains the type of work done through this and other organizations.

In 2000, it produced the Code for Unaltered Encounters at Sea (CUES), which includes safety measures and procedures to facilitate communication when ships and aircraft make contact. China, however, never used this. There are also other mechanisms available such as the International Maritime Organization’s Regulations for Preventing Collisions at Sea (COLREGS) and the International Civil Aviation Organization’s rule of the air.[11]

CUES was re-negotiated as “CUES 2.0” in 2014: Code for Unplanned Engagements at Sea. Expansion of the work done in existing organizations and the creation of new dialogue mechanisms serves to provide venues for management of issues.

Described as a new “wild card”[12] in the situation is the recent election of Rodrigo Duterte as Philippine president. The bombastic new president has sent mixed messages to all countries involved. While the Philippines and the U.S. have grown closer of late than they have been in many years, as a presidential candidate Duterte said he might sever relations with both the United States and Australia, two of the Philippines closest allies.[13] He has also stated that he may perhaps simply take a jet ski to the disputed island to personally lay claim to it.[14] Imprudent words or actions could provide the Chinese an excuse to be dismissive of the forthcoming arbitration ruling; in other words, if the Philippines “breaks the rules,” that can give China license to do so as well. More dangerously, if imprudent Philippine acts somehow led to a military altercation with China, the U.S. could be drawn in through the 1951 Mutual Defense Treaty between the U.S. and the Philippines.

To use a military slogan, “the wolf closest to the sled” in the South China Sea is avoiding a military clash between the U.S. and China. The unintended consequences of that could easily be disastrous and must be avoided. But addressing that issue is a necessary but not sufficient part of addressing the larger issues of territorial sovereignty. Legal minds have been engaged in determining an acceptable, creative approach for some time, but turning an idea into an approach takes time. Meanwhile, the politics of keeping the overall U.S.-China relationship on track while managing multiple contingent issues is a challenge — especially so in the U.S. during a presidential election year when candidates are posturing for a far more clearly populist electorate than in the recent past, and in China because economy growth no longer placates an increasingly demanding populace. It is up to the leadership of both countries to keep focused on the required end state of stability.

The views expressed are those of the author alone and do not reflect the U.S. government, the Department of Defense, or the U.S. Navy.