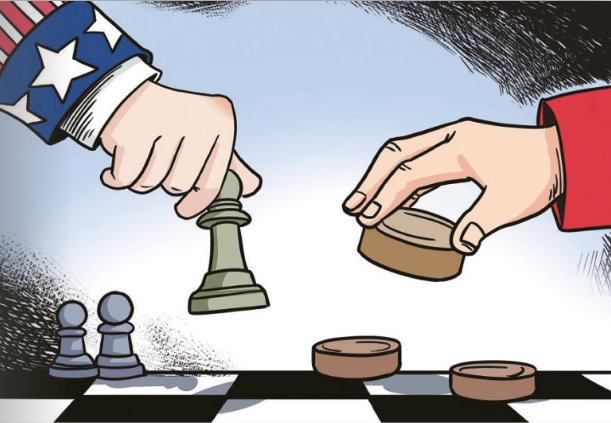 The advancement of the Taiwan Policy Act of 2022 is an important step in the U.S. to shift from “strategic ambiguity” to “strategic clarity” on Taiwan. If the bill eventually becomes U.S. law, it will fundamentally rewrite America’s “one China” policy.

On Sept. 14, the Senate Foreign Relations Committee passed the act by a vote of 17-5. The bill is disruptive in content and stands a high probability of becoming law, which will push the already strained China-U.S. relationship toward a showdown sooner than expected.

The bill, which was introduced in June, is considered the most sweeping adjustment of U.S. policy toward Taiwan since the Taiwan Relations Act came into effect, covering aspects of so-called diplomacy, military, economic, cultural and people-to-people exchanges. It is an important step for the U.S. to substantially enhance its relations with Taiwan under the new situation in China -U.S. competition.

Although the bill states that “nothing in this Act shall be construed as restoring diplomatic relations with the Republic of China” (Section 901), the concept is reflected throughout the text to give Taiwan de facto “diplomatic treatment” and demonstrate Taiwan’s “symbol of sovereignty.”

For example, on the military front, it unequivocally supports Taiwan’s rejection of unification and promises coordination with allies and partners to “identify and develop important economic, diplomatic, and other measures to prevent the People’s Republic of China from using force to change the status quo on Taiwan.” (Section 211). The bill also prioritizes arms sales to Taiwan, strengthens information sharing and personnel training, comprehensively assesses the operational capability and resilience of Taiwan’s military and increases war reserves and military assistance to Taiwan.

On the economic front, the bill supports Taiwan’s participation in the Inter-American Development Bank and the Indo-Pacific Economic Framework (IPEF). It promotes dialogue with the U.S. on the Economic Prosperity Partnership and resumes negotiations on a trade and investment framework agreement between the U.S. and Taiwan, with a view toward eventually reaching a free trade agreement, elevating economic and trade relations with Taiwan to a level of “ensuring supply chain diversification” vital to U.S. national security. The bill was enacted in the belief that economic and trade engagements with Taiwan will send a message that Taiwan is a dynamic and open business partner.

The miscellaneous items and sanctions incorporated in the bill also reflect a substantial upgrade of U.S. relations with Taiwan, with the focus on the rejection of the mainland’s reunification process. If the bill becomes law, it will represent a substantial change in U.S.-Taiwan relations, with U.S. non-support for Taiwan independence rendered obsolete and support for “one China, one Taiwan” becoming a fait accompli.

From now until January, when the current Congress expires, if the bill passes both chambers it will be sent to President Biden to sign into law. While the president could veto the bill, both chambers could vote to override that.

We can compare the legislative process of the current bill with that of the Hong Kong Human Rights and Democracy Act of 2019. In mid-June 2019, that act was introduced simultaneously in the House and Senate. It was passed by the foreign relations committees of both chambers on Sept. 25, passed the House on Oct. 15 and then the Senate on Nov. 19. The president signed it into law on Nov. 27. With a consensus in both chambers and with the White House on board, it did not take long for it to move from a bill to law. In light of the U.S. movements on issues related to Taiwan in recent years — and especially this year — the U.S. has stepped up its efforts to test China’s bottom lines, and we must not underestimate the probability of the Taiwan Policy Act being signed into law.

The bill, co-sponsored by Democratic and Republicans senators, has been brewing for several months, with all aspects of the bill fully considered. On the eve of the Foreign Relations Committee’s consideration, the White House expressed “concerns” about the bill. National Security Adviser Jake Sullivan believed that some of the law’s provisions would indeed be effective in enhancing U.S. security assistance to Taiwan, but there were also some “worrying” elements. In fact, the bill passed by the committee already contains some minor alterations, reflecting communication between the White House and the committee.

Even if the bill is not passed or signed into law by the president, it will serve as a basis for similar bills in the future. In fact, throughout the process of advancing the bill, the two parties have been building consensus on issues related to Taiwan, which features moving from an official stance of strategic ambiguity to one of strategic clarity.

In recent years, the U.S. Congress has pushed ahead full throttle with legislation related to Taiwan, attempting to pass domestic laws to implement long-arm jurisdiction and substantially change the connotations of the “one China” policy. In fact, not only the legislature but also the executive branch has been involved. In May this year, the U.S. Department of State changed its online Fact Sheet on U.S. Relations with Taiwan to state that "the United States has a long-standing one-China policy and is guided by the Taiwan Relations Act, the three U.S.-China Joint Communiques, and the Six Assurances.

This puts the Taiwan Relations Act on par with the three joint communiques and removes the phrases “Taiwan is part of Chin” and “the United States does not support Taiwan independence.” After China’s objection, the phrase “does not support Taiwan independence” was reinstated, but it no longer explicitly referred to Taiwan as part of China. It only stated that the U.S. opposes unilateral changes to the status quo by any party.

At present, China U.S. relations are still in a rough patch, and the rivalry between the two countries will persist. The U.S. will continue to use the Taiwan issue to test China’s bottom line, and the situation in the Taiwan Strait is unlikely to ease in the short term. China must gear up and fully prepare for the worst-case scenario.

TaiwanOne-China PrincipleNational SecurityChina-US Joint Communique
printTweet
You might also like
Back to Top
CHINA US Focus 2023 China-United States Exchange Foundation. All rights reserved.