Almost five years into the Syria crisis, many ordinary Syrians, desperate to escape the protracted chaos and conflicts, have chosen to flee their country, resulting in a heart-wrenching new wave of refugees.

Since the Russian air force began airstrikes on ISIS targets in Syria at the end of September, the crisis there has again attracted global attention. Russia has conducted 800 airstrikes in 20 days, with targets ranging from command centers to training camps and ammunition depots. In addition to that, the Russian navy fired 26 cruise missiles from the Caspian Sea, destroying key ISIS facilities. Officials with the Russian Ministry of Defense claimed that Russian military actions have seen “substantial achievements”: With ISIS forces withdrawing in Syria, government forces are going from victory to victory, having recovered a dozen townships, and are carrying out a counteroffensive on Aleppo, the country’s second-largest city. Against this backdrop, Syrian President Bashar Assad paid a flying visit to Moscow and talked with Russian President Vladimir Putin. This has been Bashar’s first open visit overseas since the Syria crisis broke out in 2011, indicating that Russia has again become a “main player” in the Middle East. 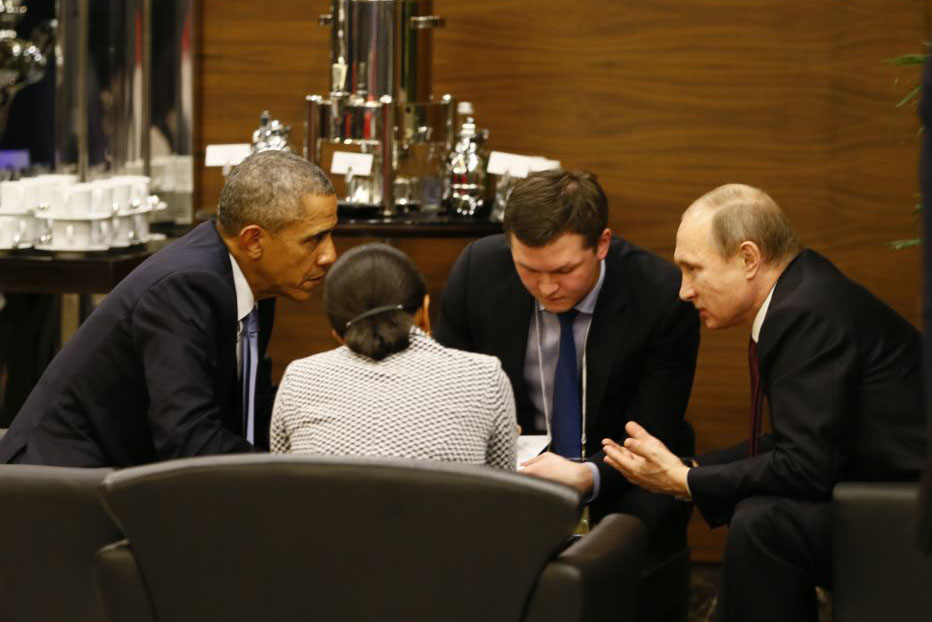 Barack Obama talks to Vladimir Putin on Syria crisis during a break of the G20 summit working session in Antalya, Turkey, on Nov 16, 2015. (AP)

The United States has protested strongly against the two military and diplomatic moves Russia has taken, claiming they would acerbate and prolong armed conflicts in Syria, and asserted “Russia is destined to fail”. This has been the first time for the US and Russia to engage in a military rivalry since the Cold War, which has been a matter of global concern. According to US Defense Secretary Ashton Carter, Putin is wrapping his country into “a shroud of isolation”, and the US will “take all necessary measures” to prevent Russia from expanding its influence in East Europe and the Middle East. Russia, on the other hand, has ridiculed the US government for being muddle-headed. Amid prevalent worries that they may enter a Cold-War-style standoff, the two parties held an emergency consultation, agreeing that both have the obligation to notify the other side about its planned flights in Syrian airspace.

Facing Russia’s forceful intervention and initial achievements, people are waiting to see what US President Barack Obama will do to retain American dominance and “save face”. Some U.S. scholars on Russia believe that Russia has multiple goals behind its attack on the ISIS: support the Bashar government, maintain Russian military presence in the Mediterranean region, and gain more room for maneuver on the Ukraine issue. “None of these is in American interests”. People are seeing increasingly clearly that military means will not bring the “decisive victory” any party anticipates. US allies in the Middle East are also increasingly disappointed in Washington, believing the US-led Middle East is becoming more and more chaotic, they are pinning hopes on Russia instead. American influence is thus dwindling conspicuously in the Middle East. Since the US and other Western countries stepped in and began promoting “color revolutions” in the Middle East in 2011, there have been four battlefields – Iraq, Syria, Yemen and Libya. In the meantime, traditional American allies in the Middle East have begun to show doubts and suspicions, some hinting that the US is abandoning old-time allies while Russia going all out to protect its own. This is one reason why many Middle East countries are now turning to Russia. The scenario reflects the reality that the strategic pattern in the Middle East is shifting from all-round US dominance to US-Russia co-dominance.

The situation in Syria is at a critical juncture at present. Where Syria, which is now caught in a “vortex”, is heading will have substantial impacts on the entire area. They may change the evolution of conditions in West Asia and North Africa, or perhaps fundamentally ease the refugee crisis that is annoying Europe. Therefore, resolution of the Syria issue is related not only to the fundamental interests of the Syrian people, but also to peace and stability in the entire region and the world. Without a doubt, the US and Russia are indispensable, powerful forces in promoting the resolution of the Syria crisis, which has resulted in humanitarian disasters. But no country can single-handedly resolve the Syria crisis, which calls for concerted efforts by the international community. A dual-track approach is needed now. While carrying out forceful attacks on ISIS, the necessary conditions and atmosphere should be created for a political resolution of the crisis. Only through reminding all parties in the Syria crisis of the benefits and dangers involved, and exerting influence in a balanced and proactive manner, can a process for true political resolution be promoted. Following the comprehensive agreement on the Iran nuclear issue, the potential for political resolution of the Syria crisis is undoubtedly positive with far-reaching significance.

Effective resolution of the Syria crisis is a test of all concerned parties’ courage to return to reason and their sincerity for rebuilding peace. It is also a test of the United Nations Security Council’s capability for preserving world peace. During his Russia visit, Bashar stated that “resolution of the Syria crisis rests ultimately on a political approach”. If big powers show courage and set aside their differences, join hands and undertake just, balanced intervention under the framework of the UN Charter and relevant principles of international law, on the premise of respecting the sovereignty of the country involved, they will not only help the Syrians out of hardship and avoid long-term instability in the region, but they may also find a new way to prevent similar armed conflicts in the future, and expand the room for the countries’ cooperation.

Self-determination, peace, stability, development. These are not only the Syrian people’s hopes for their own country’s future, but also the sincere wishes of the Chinese people and the rest of the world for their future.