Why the International Order Is Not Falling Apart 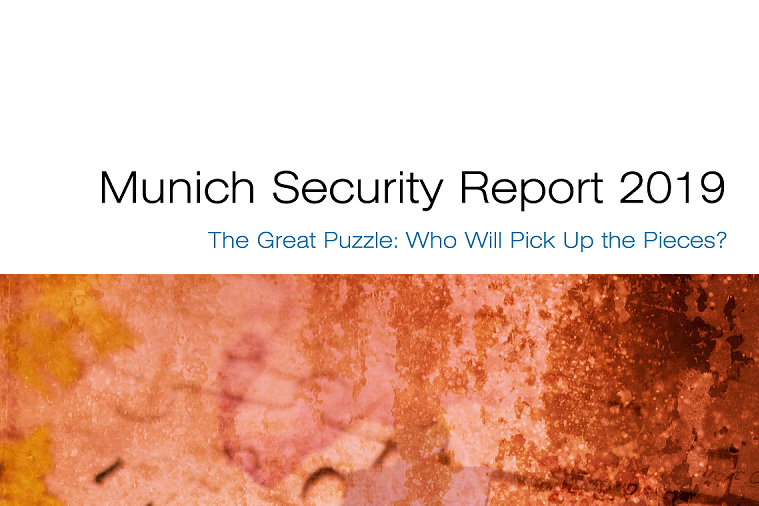 If you happened to attend the Munich Security Conference (MSC) in February 2019, you might have walked out of the event thinking the world was already shattered to bits. The conference’s central concern — “The great puzzle: who will pick up the pieces?” — was addressed in the MSC report: “a new era of great power competition is unfolding between the United States, China, and Russia, accompanied by a certain leadership vacuum in what has become known as liberal international order.”

Upon scrutinizing the trilateral relationship between China, the United States, and Russia, this Eurocentric conclusion would seem exaggerated, if not sensational. No matter how Russia might be nostalgic for its Soviet heyday, and despite its occasional hawkish remarks, Russia has no intention of competing with the US globally. Today, Russia’s ambitions have been reduced to maintaining its influence in its satellite states of the former Soviet Union, and stopping NATO’s further expansion there. Moscow’s military maneuvers have so far rarely extended beyond Europe and parts of the Middle East. Although Russia and the US point fingers at each other for violation of the Intermediate-Range Nuclear Forces Treaty (INF), it is the US that has unilaterally withdrawn from the treaty, as it abandoned the Anti-Ballistic Missile Treaty (ABM) in 2001.

If China and Russia become allies, it would indeed make real the West’s worst nightmare, and would certainly add to the competitiveness of great power rivalry — but there is no such a straw in the wind yet. China and Russia’s rapprochement is partly a response to the common pressure from the United States, and partly because of their similar views on multi-polarity. The two countries, however close, are more like two parallel lines. This explains why China and Russia have always maintained that their annual military exercises were not directed against any third parties.

The best evidence of US-China rivalry is that China was explicitly labeled as a “competitor” in both America’s National Security Strategy and National Defense Strategy documents. The relationship between the world’s two largest economies is admittedly complicated, especially given that China is widely assumed to overtake the US economically sometime around 2030-2035. Besides, in the security realm, a less-confident Washington is now paranoid that Beijing wants to drive it out of the Indo-Pacific. But so long as China continues to engage the US wherever possible, the US can hardly turn China into a foe despite the American tradition of looking for enemies everywhere. Even in the most antagonistic speech against China to date, Vice President Pence in October 2018 still pointed out that “[c]ompetition does not always mean hostility.”

Is it true then that “the entire liberal international order… [is] falling apart,” as the MSC report asserted? Before we answer that, however, one must ask if is there really something called the “liberal international order”? Such a phrase, generalizing the last seven decades after the Second World War with an apparent air of Western triumphalism, is at least simplistic, if not biased. It misses major events that occurred during the Cold War– not only fierce US-Soviet rivalry, but the independence of thirty countries, the spread of the Non-Aligned Movement, and China’s huge influence over countries in the Global South. The so-called “liberal international order” also neglects the roles of new institutions that have cropped up after the Cold War, such as the Shanghai Cooperation Organization, the G-20, and the Asia Infrastructure Investment Bank.

Perhaps the best way to pacify the West is to tell it that nobody is trying to establish a new world order at its expense. And rather than dividing the world order into “liberal” or “illiberal” camps, wouldn’t it make more sense to view the world order as a hybrid, featuring different but coexisting social systems, security architectures, and above all, civilizations? Compared with ever-changing international orders, civilizations last much longer and are much more stable. In a global village, a different civilization is no longer something on the distant horizon. It is right next to you. The English poet of empire, Rudyard Kipling, once wrote that “East is East, and West is West, and never the twain shall meet” — but today one in every three Londoners is foreign-born, and both London and Rotterdam are run by mayors of Muslim faith.

It is no coincidence that in Munich we saw speakers as different as German Chancellor Angela Merkel and CPC Politburo member Yang Jiechi stressing a common point: the importance of multilateralism. In what was described as Merkel’s best speech, she said that multilateralism is often “difficult, slow and complicated,” but “it’s better than staying at home alone.” Who can disagree with that? If we don’t cherish the Iranian nuclear deal and the Paris climate accord — both examples of “difficult, slow and complicated” negotiations producing hard-won agreements — what is the realistic Plan B?

The West’s self-confidence has reached its nadir because of Brexit, nationalism exacerbated by populism, and an American president who once called the EU an “enemy.” The Munich Security Conference is but the best mirror of that depressed attitude. But the world is not falling apart into pieces, no matter what the Munich Conference attendees have to say about it. Rather the world order is a glass half empty or half full. What you see implies more about you than the glass.