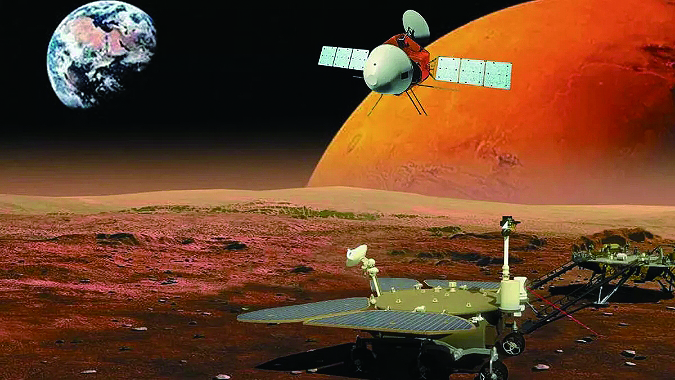 Two unrelated events rippled the headlines on December 1, 2020. The first was news that Chang’e 5, a lunar probe launched by China had landed safely on the moon. The second space-related news bit came from the US, where the colossal Arecibo space telescope dramatically collapsed from inattention and disrepair. It’s the story of two craters, a cratered space dish on earth, and a probe landing in a crater on the moon. Each symbolic in its own way of the current state of national will in regard to the long march of science.

To be fair, the US has been doing great science in the study and photography of outer planets in our solar system, even if it has abandoned the moon for the time being. And China, despite the whip-snapping success of its Chang’e Goddess-inspired moon program, has a serious amount of catch-up to do before it can equal, let alone surpass America’s prodigious space program.

But chronological simultaneity underlies the very essence of journalism. The juxtaposition of two stories may be inadvertent, but it is sufficient to provoke reflection, if not beg comparison.

On one hand, we see a ruinous, rocky surface within a crater on the moon as captured in close-up by cameras aboard the plucky lunar lander of Chang’e 5.

On the other hand, we see a ruinous, man-made crater of a collapsed US space telescope, the space-age archeological ruins of Arecibo.

Seeing the two side-by-side conveys something about the tenor of the times. At present, China is investing in science on a grand scale with political conviction, a spirit lacking in the divisive, anti-science populism riddling the US today.

China’s current drive is somewhat akin to the burgeoning of the US space program in the post-war boom of the 1950s and 1960s. That’s not to say science solves everything. Serious social inequities and clumsy government overreach threaten the long-term success of progress just as surely as the serious social challenges of civil rights and the Vietnam War eventually took the zealousness out of the US space program.

Much of the grunt work of science is done without fanfare, behind the scenes. It is slow, costly, and inches forward in incremental steps, facing dead-ends, dangers, and delays. It doesn’t come cheap.

Science does not exist in a vacuum, and the ability to advance is predicated on the politics of the day. The pursuit of long-term projects with little immediate practical benefit requires budget prioritizing and a clear political vision.

Khruschev had it, and for a while, the Soviets were unrivaled in space. Kennedy had it, too, in spades, and his successors saw his vision through. But after the divisive doldrums of the seventies, which saw a corrupt president forced to resign, oil prices soar, and the bill come due for the disastrous war in Vietnam, the once spectacular US space program lost its sense of direction and purpose in the murky politics of the day.

The US Space Shuttle program attempted to pick up the slack, but it did not pan out as promised. Not only did the program suffer two heart-breaking, catastrophic losses, but it never achieved cost-effectiveness nor the frequency and reliability required of a “shuttle” to space.

The demise of the Shuttle left the ISS space station, internationalized in the name of affordability, as the only conspicuous show in town. NASA suffers from bureaucratic sclerosis like any gargantuan organization, but it also has its hands tied by changing political winds of federal funding, including the Wolf Amendment of 2011 which prohibits cooperation with China in space. Obama-era NASA administrator Charles Bolden was against this prohibition. He sought to expand cooperation with China in the name of science, but was unable to overcome jingoistic voices in the US Senate.

At this juncture of time, China enjoys the prosperity, tech know-how, and budget prowess to invest lavishly in space science. This extends far beyond the moon probes and pertains to work being done on heavy-lifting rockets necessary if Mars is to be seriously contemplated as a destination. China has also experimented with quantum communication with satellites. On the same day that Chang’e 5 left the moon with lunar samples stowed onboard, they announced a benchmark breakthrough of a sizzling computational speed known as “quantum supremacy.”

The US-run Arecibo spherical reflector dish was the biggest in the world for half a century, but its decaying shell has been replaced by China’s Five-hundred-meter Aperture Spherical Telescope.

To put it bluntly, if China continues to double-down on space science, and the US hesitates and staggers forward in fitful half-measures, the day is not far away when China will replace the US as the world’s leading space power.

One country replacing another is not itself a cause for concern if the fruits of science are shared. Go-it-alone national missions can be enlarged, in the spirit of internationalism, “for all mankind.” Joint missions are not just economical. They are good for both celestial science and terrestrial harmony.

But the ugly precedent of the US barring China from its space station, and even scientific conferences, does not augur well. Many doors have been slammed recently in the sphere of Sino-US relations and regrettably, tit-for-tat retaliations seem to rule the day.

A Chinese flag, five yellow stars in a field of red, stands on the moon now, joining the Stars-and-Stripes flags dating to the heyday of the US Apollo program.

Given the moon’s extremely arid, airless conditions, it might be thought that such banners will wave (albeit stiffly given the absence of breeze) for centuries to come. But curiously, few such flags remain standing. Not just because of the bleaching effect of the unadulterated sun, but because flags placed on or near the lift-off pad of lunar probes tend to get irreparably damaged from the lift-off itself.

And maybe that’s not a bad thing. The flags might have a role to play in the excitement of the moment, but they should not be seen as markers of territory. Nobody owns the moon or Mars, and nobody should.