There is Still Room for Cooperation in Space 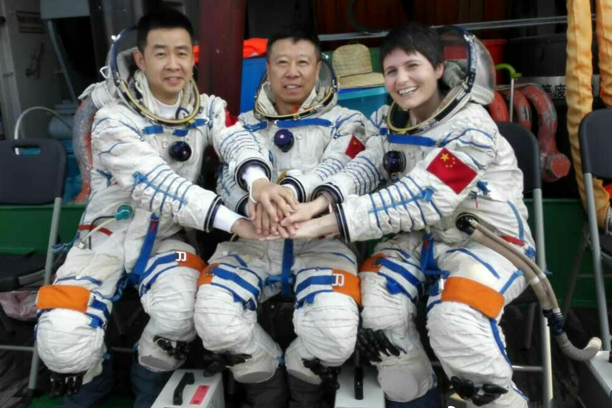 ESA astronauts complete sea survival training with Chinese counterparts off the coast of Shandong, China in 2017.

Last year, China made great strides in space with over 55 launches, nearly all of them successful. Its Shenzhou 13 program carried two men and one woman into space to board the new Tiangong space station where they lived and worked for over six months, returning to Earth safely in Inner Mongolia on April 16.

According to Space News, 2021 was a banner year for Chinese space shots, and despite continued enthusiasm for space activity, it will be a hard year to beat. “In 2021, China launched its first space station module, two cargo spacecraft and two crewed missions. Its first independent interplanetary mission, Tianwen-1, entered Mars orbit and landed the Zhurong rover on the Red Planet.”

The Shenzhou 14 spacecraft is being prepared for launch this year.

However, things are getting off to a slower start this year. There are problems with the scattering of uncontrolled debris from Long March 5B rocket boosters, and further delays are expected in the launch of Wentian and Mengtian modules, originally scheduled for this summer. The modules, part of a plan to expand the currently tight quarters of the space station into a more significant platform, represent a bottleneck for Shenzhou 14’s crew, part of whose mission is to supervise the expansion of Tiangong through the addition of modules.

The China Aerospace Science and Technology Corporation announced in February its plans to launch 40 times this year, two of which have already been completed. It will take half a dozen launches to finish the current phase of construction and expansion of the Tiangong space station.

Last year was also a bumper year for U.S. space launches, exceeding China in total weight lifted into orbit, but not in the number of launches; NASA now notably shares the action with numerous private space ventures, such as billionaire-funded Virgin Galactic and Blue Origin, but most especially Space X, which launched several high-profile manned vessels as well as numerous communication satellites in the Starlink program.

The International Space Station is still creaking along, though it’s past its “best-by” date and is pegged for retirement some time in the next few years, perhaps as soon as 2024. In 2031 it is scheduled for destruction. At that time, the elaborate craft, with its gargantuan solar panels will be directed to re-enter the earth’s atmosphere in a controlled act of self-obliteration, ending the mission of an impressive orbiting platform that has been described as the most expensive object ever made by man.

The ISS, a truly international undertaking that has been a home away from earth for humans since 2000, is a joint venture between NASA and Roscosmos of Russia, but also includes key support and involvement from JAXA from Japan, ESA from Europe, and CSA from Canada. It was constructed with the heavy-lifting help of U.S. Space Shuttles before that program was phased out, and has used Russian Soyuz craft to ferry astronauts back and forth for over two decades. SpaceX began delivering cargo to the ISS in 2012 and started ferrying humans back and forth in 2020.

The sudden uptick in tensions between the U.S. and Russia after Vladimir Putin ordered the invasion of Ukraine has put the very existence of the International Space Station in doubt. So far, the two nations continue to cooperate in space, even as relations on the ground reach all-time lows.

After spending almost a year aboard the space station, NASA astronaut Mark Vande Hei returned to Earth on March 30 in a Russian Soyuz craft along with two cosmonauts. It’s a good example of cooperation, but it raised eyebrows and some hackles given current tensions. And when the new Russian crew arrived at ISS dressed in yellow and blue, it surprised observers caught up in political events, who associated the color scheme with the flag of Ukraine. It was just a coincidence, since the space suits were manufactured well in advance of current hostilities.

More serious doubts have arisen about the future of the space station, indeed its very viability as a safe environment for habitation, if U.S.-Russia cooperation were to abruptly come to a halt.

It’s one thing for astronauts and cosmonauts to retreat to their respective cabins, but quite another to keep such a complex orbiting habitat running smoothly.

Both nations possess the rockets and orbital units that can take space station residents back to earth if the program were to be suddenly suspended, but in the meantime, cooperation is needed just to breathe. The U.S. side of the station provides a breathable mix of air for the whole craft. The Russian side has a vital role to play, too, as it contains the thrusters necessary to keep the craft in the right orbit which is a critical factor over time.

Dmitry Rogozin, director of the Russian Space Agency, has threatened to end cooperation with NASA if sanctions applied to Russia for its illegal invasion of Ukraine are not lifted immediately. He has backed off on this threat, but new announcements are expected soon that are expected to add pressure to the already fractured Russo-American relations in space cooperation.

There’s nothing like the harshness of space to drive home the point that cooperation isn’t an option but a necessity. Already China is thinking ahead to the day when Tiangong is fully constructed and the ISS is being retired with hopes of providing an international platform for low-orbit activity. Bai Linhou, vice chief designer of the space station, sees Tiangong as a station “shared by all mankind” echoing the words of Neil Armstrong, who accompanied his first footfall on the moon with the words “for all mankind.”

But given current geo-political trends, cooperation between the U.S. and China in space is still a long way off. China’s program was too immature to be included when the U.S. and Russia first drew up plans for the space station in the 1990’s, and since 2011, there’s been the additional political impediment of the Wolf amendment prohibiting China from joining in U.S. space activities.

Secondly, China’s program drew much of its early inspiration from Soviet era spacecraft which in engineering terms is closer to interoperability than the home-grown U.S. program.

Indeed, Rogozin’s threat has forced all major players to look beyond ISS, the mainstay of U.S.-Russian cooperation for two decades, to a different vision of the future, perhaps one in which Russia and China are paired as partners in space. There are practical reasons for this, such as Russia’s technology and China’s funds, but political alignments are notoriously changeable and difficult to predict. Rogozin wants Russia aboard China’s space station.

One only has to look at the many ups and downs of relations between Moscow and Beijing to realize that Rogozin’s vision of China and Russia riding off into the cosmic sunset, which happens every 90 minutes in earth orbit, is not a sure thing.

ShenzhouSpace CooperationChina-U.S.-Russia RelationsNASA
printTweet
You might also like
Back to Top
CHINA US Focus 2023 China-United States Exchange Foundation. All rights reserved.