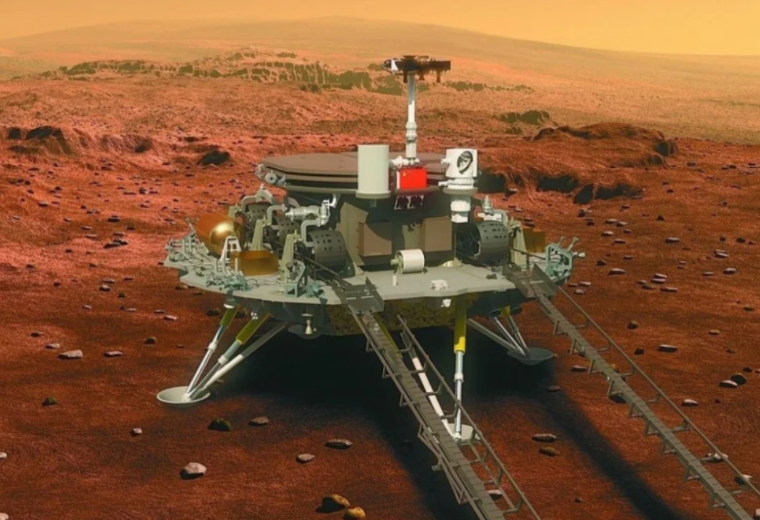 China successfully landed a spacecraft on Mars at 7AM Beijing Time on May 15, 2021. Within a week it was snapping photos of the red planet and the Zhurong rover took its first short spin on the Martian surface.

It’s a huge win for science and technology. The U.S. remains the undisputed leader in Mars exploration, but just as it’s good for the market to have competition and at least two or three viable brands, it’s good for science to have some mission redundancy and originality of approach, aiming for the same goal from slightly different angles.

One need only consider the sad reality that the U.S., a giant in the short but action-packed history of space exploration, fumbled its gigantic lead in sending humans into space after a series of tragic mishaps doomed the Space Shuttle program. In the aftermath of the last shuttle flight, the U.S. had no way to launch astronauts into space for a full decade. This unanticipated shortfall came about despite U.S. “supremacy” in space.

In terms of the record book, U.S. prestige is secure in not only having reached the moon first, but holding an unbroken monopoly of manned flight to the moon as represented by the legendary Apollo program. A great success, but it’s already half a century old.

Various arms of the U.S. space program, the work done out of the Jet Propulsion Lab in particular, continue to do stunning work with robotic craft, including the exploration of Mars and stunning flybys of Jupiter, Saturn and even Pluto, but the U.S. had to turn to Russia for a helping hand to get its astronauts aboard the International Space Station.

When the U.S. landed Neil Armstrong and Buzz Aldrin on the moon, definitively beating the Russians in the space race, who would have guessed that the U.S. would need Russian help to get into Earth orbit just forty years later?

A similar question can be raised regarding China’s relatively late entry into the robotic exploration of Mars. Being number two or three isn’t as nice as being number one, but if number one gets sidelined for whatever reason, it’s nice to know number two and three are there as backup. Not just for the sake of a particular nation, but for the sake of science, or as the astronauts like to say, “for all mankind.”

It is perhaps predictable that nationalistic U.S. media coverage of China’s Johnny-come-lately space efforts in recent years should be riddled with yawns or even worse, outright ridicule.

But it is not fair.

The New York Times has been promoting the tiresome view “we’ve been there, done that” in its coverage of China’s Mars Landing, but that’s far from the worst of it. One can also detect a hypocritical sense of alarm that China is doing precisely the kinds of things that the U.S. has done for decades, except that when China does it, it recast in a negative light, as potentially imperiling humanity and the planet.

From the time last summer, when China’s Mars mission was launched, to the last few weeks culminating in the successful Mars landing and movement of the Zhurong rover on Martian soil, the New York Times has played down China’s success by couching it in the context of unrelated problems.

When China launched the Mars-bound Tianwen-1 last July, this is what the paper of record had to say:

The timing of the launch comes at a moment when China is facing increasing international pressure over its handling of a variety of issues.

The article goes on to raise unrelated political topics of Hong Kong, Xinjiang and the coronavirus outbreak in Wuhan, and then concludes:

The stunning success of the two most recent independent Mars missions, one by the U.S., the other by China missions can be appreciated as a human victory, the triumph of peaceful application of science and rationality in a world that could use a lot more of both.

Not for the NYT, though. Its correspondent Steven Lee Myers wrote a May 6, 2021 scare piece with an assist from the NYT headline writers:

Heads Up! A Used Chinese Rocket Is Tumbling Back to Earth This Weekend.

No, you are almost certainly not going to be hit by a 10-story, 23-ton piece of a rocket hurtling back to Earth… Chicago, located a fraction of a degree farther north, is safe, but major cities like New York could be hit by debris.

Myer’s article, for which Kenneth Chang shared the byline, alternates wildly between breathless tabloid style coverage (I’m guessing it’s not the science writer) and more factual details about the very real problem of space junk which has dogged the U.S. program for decades.

On May 14, a day before the Zhurong Mars landing, the NYT ran a piece on China’s space ambitions giving Myer another chance to snipe at China, saying that one of its rocket boosters narrowly missed the Maldives and that China’s space program “continues to create danger, however small, for people all over the planet by failing to control the paths of rockets it launches.”

Space debris is a serious problem that needs to be addressed in China as well as the U.S. (by far the leading producer of space junk) but what is really questionable is why such stories are squeezing out coverage of the Mars landing.

Even when confronted with the undeniable success of China’s successful landing on Mars on May 15, Myers can’t help but couch it in comparative terms:

The Chinese Mars mission may seem less sexy than NASA’s latest, since it is essentially repeating feats that the Americans accomplished decades ago…

It’s easy enough for an armchair warrior to make fun of China for being “behind” U.S. accomplishments on the Red Planet, but it’s a cheap shot. The logistics of putting together such a mission are mind-boggling and represent the hard work and vision of thousands, if not tens of thousands of scientists and their support network. And when it comes to science, competition is a good thing.

Not only does China’s Mars program test the viability of different approaches to the same problem—the technique used by China to drop into a lower orbit to more gently land a craft on Mars is significantly different than the dazzling U.S. technique—but it offers a viable alternative. Alternative systems are a boon to science and exploration, most especially should one party or the other fumble the ball again--for reasons of funding shortfalls, domestic discord, loss of focus, the rise of irrationality, or whatever.

It happened when the U.S. yielded its lead in launching manned flights to Russia, with the result that the understudy got to play the lead role, and in space, as on the stage, that’s a good backup to have.

U.S.-Russian cooperation and shared use of the Soyuz craft to keep the U.S. space station viable and fully manned is a gold standard for showing how two countries with wildly different political systems and ideologies can nonetheless pitch in and help each other out.

Let’s hope that China and the U.S., despite their differences, will be able to lend one another a helping hand when the going gets tough in the unforgiving environment of outer space and other planetary surfaces.