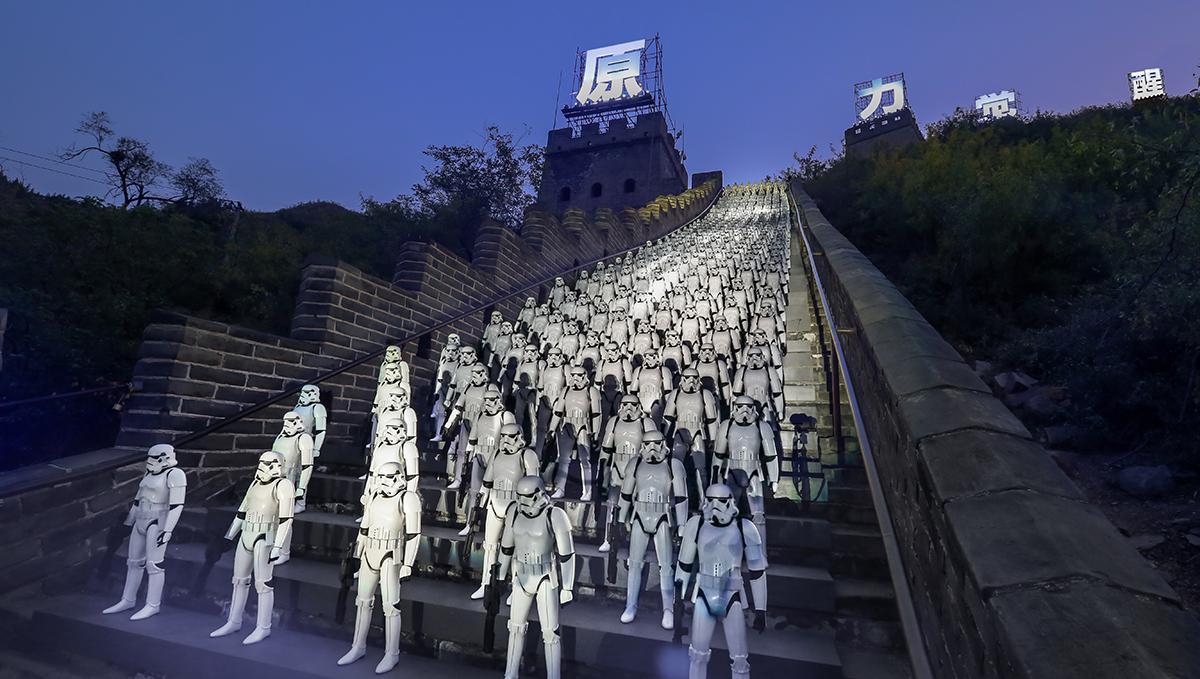 Disney lined the historic Great Wall of China with an army of 500 Stormtrooper figures, in honor of Star Wars: The Force Awakens, October 22, 2015. (The Walt Disney)

Since gaining political prominence, President Xi Jinping has warned of foreign attempts to lure the Chinese youth from socialist, cultural, and ethical standards guided by Marxism. The Chinese Communist Party (CCP) has identified Chinese schools, universities and popular culture as primary targets of Western infiltration targeting Chinese youth. While welcoming the technological and financial benefits of an interconnected global economy, China is continuing an economic policy of reform and opening-up, while simultaneously maintaining single-party control of ideology.

During a speech on October 15, 2014, President Xi addressed the role of the arts in Chinese society, condemning artists who produce “cultural garbage,” “subvert history”, and present “no sense of nation, sense of community, [or] sense of family.” Xi further labeled ignorant and extravagant art as “the root cause of all kinds of problems in society” and an impediment to the “reform and opening and the socialist drive.”

In November 2017, more than 100 of China’s filmmakers, actors, and music icons met in Hangzhou to analyze the 19th Party Congress and General Secretary Xi’s political theory. President Xi emphasized that “culture is the soul of a nation,” and that Chinese culture, in its traditionalist form, should reflect socialist principles. In educating Chinese popular icons on Marxism and Chinese culture, the CCP hopes to sway public figures from emulating trends found in Western entertainment to produce more unique Chinese films and music. In labeling the CCP as the inheritor of traditionalist Chinese culture, the government wishes to build an alternative culture to compete with the West: one that is Chinese, socialist, and in the best interest of the single-party rule.

The CCP is correct in identifying youth as susceptible to ideological extremities during potential political reform. Yang Gao, a Singapore Management University sociologist and researcher of foreign entertainment and its influence on Chinese youth, argues that generations born in the 1980s and 1990s experience a “clash between traditional collectivist culture” and the “emergence of individualism,” and that American television is admired for its perceived ‘authenticity.’ In response, the CCP and President Xi hope to influence the education system and Chinese popular culture, replacing Western values with more traditional options for learning and entertainment to ultimately preserve the CCP’s vision for China in a ‘new era.’ President Xi promotes Chinese culture, citing Confucius and referring to the CCP as the “the loyal inheritor and promoter of China’s outstanding traditional culture.” Official state media labels the West as a culture in crisis, but acknowledges the potential for Western concepts to influence Chinese youth in schools and through entertainment, prompting increased ideological policies toward “the Internet, traditional media, culture and entertainment, universities, think tanks, and non-governmental organizations.”

In August 2013, a leaked CCP internal communiqué, Document No. 9, which the New York Times suggested “bears the unmistakable imprimatur of Xi Jinping,” revealed seven perceived “false ideological trends, positions, and activities” that CCP officials should monitor and prevent. The list included dangers of Western notions of constitutional democracy, universal values, civil society, neoliberalism, historical nihilism, and the questioning of “the socialist nature of socialism with Chinese characteristics.” After the document’s release, lawyers, human rights activists, NGO leaders, and journalists supportive of Western ideals were detained, jailed, or arrested for disturbing the social order, creating public disturbances, endangering state security, and or providing state secrets to foreigners through protest or activism.

The Chinese government since battled Western culture in higher education. In 2011, then-Vice President Xi Jinping stressed that “university Communist Party organs must adopt firmer and stronger measures to maintain harmony and stability in universities," during a meeting with party officials. He further emphasized the role of teachers and professors in spreading appropriate ideas and influencing the Chinese youth. In 2015, then-Minister of Education, Yuan Guiren, allegedly instructed university officials to prohibit professors from teaching materials that circulate Western values in an attempt to combat unconventional security threats.

During the National Conference on Ideological and Political Work in Colleges and Universities held in Beijing in early December 2016, Xi emphasized China’s unique history, culture, and national conditions that guide it toward its own path of Marxist higher education. He identified teachers and professors as ‘engineers of human souls’ and propagators of advanced ideology and moral and virtuous learning. The Ministry of Education also incorporated President Xi Jinping’s political thought, Socialism with Chinese Characteristics for a New Era, into the national curriculum and school textbooks to strengthen the Party’s role in academia after the 19th Party Congress. The CCP, fearful of past Western-driven regime change attempts, identifies past ‘color revolutions’ throughout the world as low-cost instruments of the U.S. and the West to destabilize states with single-party rule under the guise of universal values and human rights. Students are susceptible to Western interpretations of freedom, democracy, and human rights and are therefore targeted by infiltrators as foot soldiers for protest.

Cultural crisis in the west?

While the CCP is concerned with the infiltration of Western values, dissatisfaction with establishment politics is on the rise in the West and, ideological deficiencies in both the U.S. and China are identified by young people. In July 2016, in The Democratic Disconnect, Robert Stefan Foa and Yascha Mounk found that only 30 percent of individuals born in the U.S. since 1980 consider it essential to live in a democratic country. The study also presents figures which indicate that overall, democracies in North America and Western Europe are more critical of political leaders, more pessimistic of democratic political systems, and more supportive of less democratic alternatives. Most consider that since 2016, the decline in legitimacy is more pronounced.

While Western culture expands throughout the globe through entertainment and popular culture, some societies are attempting to preserve their uniqueness and offer a competitive substitute. In China, the CCP and President Xi Jinping are increasingly concerned with the impact of Western influence over Chinese academia and entertainment. However, studies indicate that Western values are in question, and perhaps the Chinese government can leverage specific facts and figures to perpetuate a Western culture in crisis. But, in doing so, Beijing should offer a concrete and attractive alternative.

China educationCultural ExchangeCCPXi Jinping
printTweet
You might also like
Back to Top
CHINA US Focus 2023 China-United States Exchange Foundation. All rights reserved.