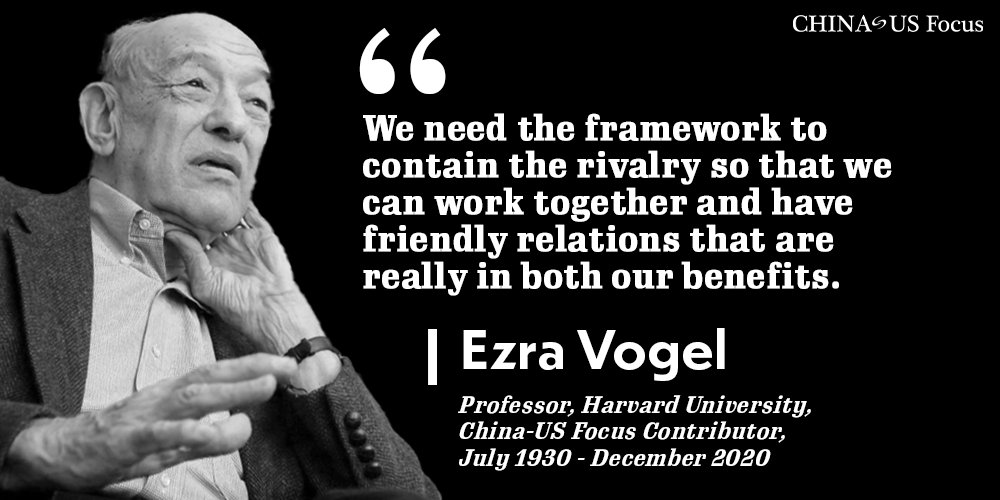 Early in the morning of Dec. 21, I learned that Ezra Vogel had passed away. I couldn’t believe the unfortunate news and felt deep sorrow. Ezra’s last email to me was on his 90th birthday, July 11. I wrote to him with my congratulations. He replied:

“Dear Zaiwang -- How nice of you to remember my 90th birthday. Thank you for sending those pictures from your visit to Harvard.

“Of course, I am very unhappy that relations between China and the United States have become so bad.

“Do you think there is any hope that relations might improve if Biden were elected president and showed more receptivity to our countries working together? --Ezra.”

“Don't worry too much,” I replied. “We’ll see. China still has a long way to go; the Chinese will do their best to develop their own economy, and improve their livelihood. That’s what the people welcome and hope to attain."

I met Ezra four times – three times in Chengdu and once at Harvard University.

The first time was on Dec. 7, 2007, when by invitation of Professor Kristin Stapleton of New York State University, I accompanied a delegation from the National Committee on U.S.-China Relations to the Jianchuan Museum in Chengdu’s Dayi county. When Kristin learned that I had published an article titled “In Nanchang I visited Deng Xiaoping,” she introduced me to the delegation’s consultant, Ezra Vogel. She told Ezra that I once visited Deng Xiaoping’s home during the Cultural Revolution.

Ezra immediately asked me to sit next to him and asked a lot of questions about the details of Deng's life in Nanchang. Ezra said that Deng had been in Nanchang for several years, during which he formulated his ideas on reform and opening-up for China.

From nine o’clock in the morning to nine in the evening, our conversation hardly stopped. I was surprised, admiring the fact that the near-octogenarian was so energetic and agile in thought. Before the conversation ended, he said to me: “I believe in your statement, because you are not only personally experienced but also objective.”

Ezra thanked me for telling the story. At the end of his book, I was included in the list of 300 people he had interviewed.

In 2008, I visited the United States and met Ezra at Harvard University. Ezra told me that his book was basically finished and was just being revised and supplemented. But he was a little hesitant to send the book to the printer because it included some sensitive topics. He was worried that some of his Chinese friends would feel uneasy. I replied that the topics were unavoidable, and as long as he presented an objective view, his Chinese friends would understand.

Ezra told me that it was not easy to write the book: “I'm not a historian, I’m a researcher, I’m going to present the interviewed questions when writing, but the most important thing is to think.”

It is my impression that Ezra was rich in his learning, yet extremely humble, and friendly. He was good at listening, and diligent in deep thinking. His writing style is fluent, and his use of words is careful and rigorous. He was a knowledgeable man and a good neighbor in the eyes of many ordinary people.

Over the course of a decade, he wrote his 900-page landmark volume “|Deng Xiaoping and the Transformation of China,” which shows his energy and intelligence. He embodied the wisdom and virtue of the Jewish people and donated more than $1 million, which was the entire income from his book, to an unknown university in his hometown.

Aug. 28, 2014, was the 110th anniversary of Deng Xiaoping's birth, and Sichuan province, Deng’s hometown, held commemorative activities. I served in the Sichuan Provincial People’s Association for Friendship with Foreign Countries and invited Ezra to visit the cities of Guang’an and Chengdu. When he came to Sichuan, I accompanied him.

That was Ezra’s third visit to Guang’an. He was impressed that the city had changed a lot. After seeing the renovated and expanded former residence and memorial hall of Deng Xiaoping, he noted the hall’s many new exhibits, and especially the restoration of Deng’s personal office and meeting room.

Professor Ezra Vogel was a scholar of international reputation who had profound research abilities and an exceptionally incisive view of Deng’s theory and practice. His book shows the history of China's political, economic and social transformations with particular insight, and also shows how China became an important force in the world. It deserves careful reading if one wants to fully understand the course and direction of China's reform and opening-up. The book gives a panoramic description of Deng’s ups and downs and China's road to reform and opening-up, as well as a deep analysis of Deng’s personality and style of management and administration.

The book includes a wealth of Chinese and foreign archival materials and research results. It also includes details of how China and the United States established diplomatic relations and how the two countries forged a friendly working relationship after overcoming difficulties.

“The biggest difficulty I’ve had in writing the book in 10 years was collecting materials," Vogel admitted in a group interview with several media outlets. “During the interviews, I met and listened to the people who supported or criticized Deng Xiaoping. Therefore, in this book, I tried to be as objective as possible, so that readers can form their own opinions."

The year 2020 was a year of global turbulence and uncertainty. Ezra was deeply worried about the decline in U.S.-China relations. He was hoping that the youth of the two countries would work actively to maintain and improve this important relationship.

The man is gone, but his words are still ringing in our ears like a bell, enlightening the hearts of the people.

May Ezra Vogel rest in peace in heaven.