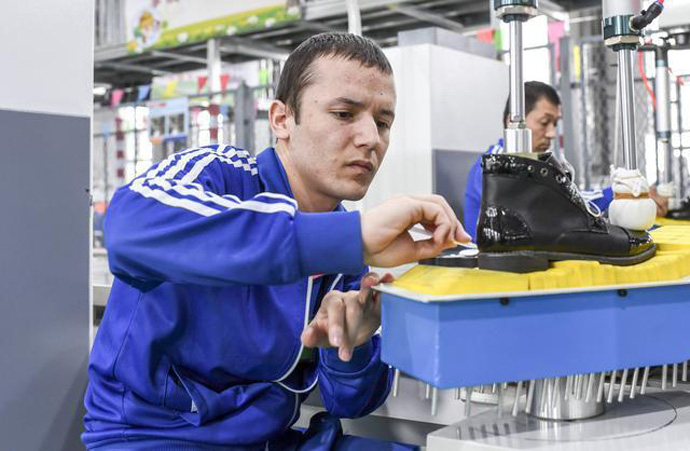 In a rare moment in the history of the United Nations, two groups of Ambassadors recently wrote to the world body regarding the education and training centers in Xinjiang — and expressed dramatically different views. An examination of this phenomenon is imperative to understanding the state of affairs in Xinjiang and to discerning fact from fiction.

On July 10, Ambassadors of 22 (later 24) countries jointly signed a letter addressed to the UN High Commissioner for Human Rights "expressing worries" about human rights conditions of Uygur and other ethnic minorities in Xinjiang, China. They called for China to close the vocational skills education and training centers (education and training centers hereafter) there.

On July 12, Geneva-based Ambassadors of 37 (later 50) countries wrote a letter to the UN, which praised China’s progress in Xinjiang in promoting human rights and implementing anti-terrorist, anti-extremist measures such as the establishment of the education and training centers. The letter concluded that all ethnic groups' basic rights were guaranteed.

The education and training centers are located at the center of Asia. Xinjiang borders eight countries, some of which have been the target of violent terrorist attacks. Ethnic separatists, religious extremist forces and individuals radicalized by their ideologies have committed more than one hundred terrorist incidents in Xinjiang in recent years, killing and injuring hundreds of law enforcement officers and civilians of all ethnic backgrounds. In April 2013 alone, 15 people were killed, including 10 Uygur, three Han, and two Mongolian people.

In response to such circumstances, education and training centers were established as an experimental approach to rehabilitating those involved in minor criminal offenses or law violations and therefore preventing and pre-empting terrorist attacks. Courses at the centers feature content in four areas: knowledge about laws, the country's national language, conducting religious activities, and training in vocational skills.

Participants are issued certificates of completion upon passing the examinations. The majority of participants have reportedly returned to society: 90 percent have found a job and are earning a decent income.

Official statistics show that the education and training centers have made important achievements. Not a single violent, terrorist incident has occurred in the past three years and as a result public sense of safety has improved remarkably. In 2018, Xinjiang received more than 150 million person/times of tourists from home and abroad, an increase of more than 40 percent over 2017.

Returning to the two letters submitted to the UN, two facts merit attention. First, the total population of the 24 countries with a negative view of the situation in Xinjiang is below 600 million, all represent advanced western nations and do not include a single Muslim country. Among the 50 countries with a positive view, the total population is two billion, countries from Africa, Asia, Europe and Latin America are represented, and 28 are members of the Organization of Islamic Cooperation. Compared with the 24 western countries, the group of 50 represents a far greater number of people and is far more diverse. As regional neighbors, the group of 50 is likely more invested in what is happening in Xinjiang and may have access to more reliably accurate information.

Second, China welcomes people of all countries to travel to Xinjiang and observe what is happening on the ground. Many foreign diplomatic envoys and journalists stationed in China have visited or conducted interviews in Xinjiang. All foreign diplomatic envoys who visited Xinjiang have surprisingly unanimous impressions. What they find in Xinjiang is "completely different" from western media reports.

Reports by foreign journalists who have visited Xinjiang are also better informed. Recently the State Council Information Office invited reporters from 24 countries for a reporting trip to Xinjiang. Obidov, a journalist from Uzbekistan, wrote a vivid report titled "Letter from Xinjiang – a visit to education and training centers in Xinjiang". It states:

"We visited such prefectures and cities as Urumqi, Kashgar, Aksu and Hotan, accompanied all the way by interpreters of the English, Russian, Turkish, and Japanese languages.
"We were told that we can talk with any people in charge or trainees as we wish, and we were free to choose with whom and for how long to talk. Since Uzbek is very similar with Uygur, I didn't use translation at all.

"Then what are the education and training centers like? They are very much like boarding schools. There are three to four double-deck beds in each dorm room, along with desks, chairs, closets and toilets; there are classrooms and libraries in classroom buildings; in buildings for vocational training, there are special venues for the teaching of 15 vocational skills, including computer, hairdressing, gardening, hotel management, and cooking.

"How long would the entire process of re-education last? It all depends on a participant's capabilities. Some can pass all tests after nine months, some would stay for one year and a half.

"The international community should not judge based on conclusions by western media. To put it in a less impolite manner, those reports are not objective. I didn't see any of the reported wire fences in any of the education and training centers we visited. There are rooms for making phone calls in each center. Participants can call their family any time they want. How can you call such centers 'prisons' or 'concentration camps'?”

Increasingly, informed people have come to the understanding that an objective stance and broad vision are indispensable for evaluating the education and training centers in Xinjiang.

The centers provide an innovative approach, based on extensive experience, to tackling the global challenge of preventing and responding to terrorism by addressing the symptoms and root causes at once. They are thus worth endorsement and promotion, instead of defamation and stigmatization.

Xinjiang
printTweet
You might also like
Back to Top
CHINA US Focus 2022 China-United States Exchange Foundation. All rights reserved.