In the Spirit of Isaac Newton 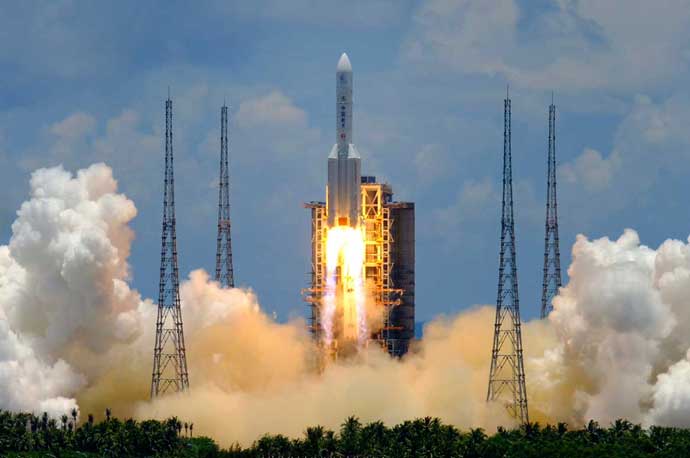 China launched a daring Mars mission on July 23, 2020 that aims to land a robotic rover on the red planet next year. The Tianwen Mars mission is an important step into space, not just because it is a bold, science-driven endeavor of exquisite complexity, but because it is an inspiration to earth-bound youth--not just in China but across the world--who are growing up during a pandemic and a political environment where science isn’t always taken seriously and irrationality looms large.

Tianwen-I was launched from the Wenchang Spacecraft launch site on Hainan Island during a “window” that makes the most of the relative positions of Earth and Mars, and is scheduled to intercept the orbit of the red planet next February. It will be propelled to follow a curvaceous Hohmann Transfer Orbit, the calculus of which counter-intuitively requires launch before the two planets are at their closet point and arrival after the planets have drifted apart again.

The craft has three main components: an orbiter and a lander with a detachable rover. The rover will roll off the lander and unfold its solar panels to power its exploration of the landing zone. Cameras, probes and sensors will simultaneously monitor Mars from above and on the ground, studying the climate and terrain.

Tianwen-1 is an “ambitious mission driven by science that represents significant progress in China’s space program,” according to Australian astrobiologist David Flannery. The program can be seen as a test run for the even more difficult mission of collecting rock samples on Mars and returning them to earth, scheduled for 2030. America’s NASA, the undisputed leader in Mars exploration to date, can deploy the technology necessary to collect untainted samples of Martian soil and store it in tubes, but it has no craft currently capable of returning the precious samples to earth. Given the complexity of the mission, which requires several tricky transfers, and the eagerness of scientists around the world to study such material for traces of microscopic life begs the question: Isn’t international cooperation the best way forward?

Flannery further points out that China has been sharing its data sets of the Moon and hopes it does the same with Mars, for “space belongs to everyone.”

The same could be said for scientific accomplishments everywhere in the present-day world. Science is a beautiful thing, owned by no one and guided by laws beyond human tampering, but capable of being harnessed to benefit mankind.

An earlier Chinese Mars probe, the Yinghuo-1, was launched on a Russian rocket in 2011 but never got beyond Earth’s orbit due to engine failure of the launch vehicle, a reminder that space shots are never easy. The US, Russia, and Japan have seen expensive missions get wiped out due to crash landings, propellant leaks, failure of solar panel deployment and faulty software. Mars missions have a failure rate of about 50% which calls for a special kind of perseverance.

Geng Yan of China’s National Space Administration was candid about how Mars poses a different order of challenge than the moon. “We only have a limited understanding of Mars. There are still many uncertainties about the environment and great risks.”

China has moved beyond that regrettable setback with the highly-successfully Chang’e lunar missions, the most recent of which engaged in ground-breaking exploration of the “dark side” of the moon.

The dark side is not any darker than the side of the moon we are familiar with, but because the moon is locked into an earth orbit by which one side never faces earth, direct radio contact is impossible. To maintain contact with a craft on the far side of the moon, a relay communications satellite placed in a “halo” orbit was integral to the mission.

The gravity of Mars and its thin atmosphere pose challenges to a soft landing. Dust storms are a known hazard, having disabled at least one American rover, and the solar panels that will power Tianwen’s robotic rover require a different design from Yutu, one of the lunar rovers part of the Chang’e missions to the moon, which operates in a vacuum.

At a time when a terrible pandemic puts large swathes of the globe on lockdown, it is important to reach for the stars, to continue to explore, experiment and dream.

Isaac Newton famously invented calculus and deepened the understanding of gravity that makes it possible to calculate with precision the orbital dynamics of Earth, Mars and spacecraft shuttling in between. That he did so while in isolation and under a kind of lockdown during the ghastly plague that hit Britain in the late 1600s is a remarkable testament to the power of creative thought.

But Newton didn’t just come up with these ideas on the spot, even if the story of watching an apple fall from a tree is not entirely apocryphal. Good science, like good history and good governance, is a shared project built on the incommensurable contributions of those who came before.

"If I have seen further,” Newton reminds us, with a humility befitting all scientific endeavor, “it is by standing on the shoulders of Giants.”