Is the Statue of Liberty Turning Her Back on Foreign Students? 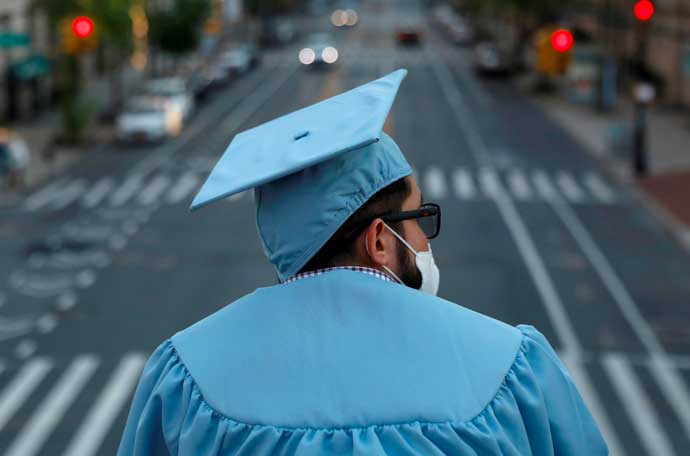 On July 6, 2020, the White House shocked the world of higher education by threatening to deport international students (a large portion of whom are already struggling with finances, emotional stress and strained logistics due to the pandemic) over a technicality by which online courses were deemed insufficient to maintain visa status. There was considerable pushback from universities across the country and on July 14, 2020 it was announced that the ill-conceived policy ploy had been rescinded.

The immediate and vocal pushback by universities such as Harvard and MIT was one factor, as was the threat of legal action against the cruel and prejudicial White House policy move. But the attempted move created a great deal of anxiety and insecurity for students from abroad, both for those already in the country and for those seeking to come. Furthermore, this move, although rescinded under pressure, put another serious dent in the US reputation as a desirable place to study.

These are tough times for internationally-minded people, and international students in particular. Chinese students in the United States, the largest single national cohort, bear a special burden since their home country and host country are increasingly at odds.

The dislocations and distress caused by the pandemic are bad enough, but how does it make a Chinese student feel when the US president calls Covid-19 the “Kung Flu,” the “Invisible Chinese Virus” or the “Wuhan virus”?The Trump administration has been insulting, stigmatizing and penalizing foreigners for almost four years now. The abortive threat of deportation was not an isolated act but part of a pattern. For the quarter of a million Chinese students studying in the US, the July 6 bombshell came on the heels not just of the President’s racist pandemic terminology, but an orchestrated media campaign to demonize all things Chinese. It’s not just that an aggressive electronics competitor such as Huawei is being singled out for opprobrium, or state-linked Confucius Institutes and Chinese media firms are being shown the door, but Chinese teenagers who have come to the US to study are now darkly viewed as spies.

These murky and malevolent nationalist currents threaten to upend international education as we know it.

The pandemic has caused schools around the globe to shutter. Classrooms are empty while teachers scramble with online pedagogy to find new ways to pass the torch of knowledge. Meanwhile, sports, music, club activities, general co-mingling and all the other fun stuff have been cancelled.

To single out international students who have studied hard, trained long and travelled far and threaten them with deportation is a slap in the face of a new generation.

It is not just a cruel jab, but a self-inflicted wound. Cultural exchange has long been a core element of US diplomacy. The US economy has long been the beneficiary of highly skilled workers, and the business of educating the world is big business. The financial contribution from Chinese students alone amounts to some US$15 billion in tuition and living expenses.

The soft power own goal and economic fallout is dire enough, but resentment, once unleashed, is hard to contain. The administration’s gleeful intolerance sows emotional distress and division, and further rattles a badly-rattled world.

If put into effect, the punitive measure would have immediately rendered illegal hundreds of thousands of F-1 visa holders already in the US for an education, while pre-emptively dashing the hopes of those poised to come.

A generation of grassroots ambassadors are being told to go back where you come from.

The Statue of Liberty is no longer facing the sea but has turned her back to the world.

And why is the US Immigrations and Customs Enforcement, known by its appropriately chilly acronym ICE, slamming the door to constructive exchange with China, India, Korea and other nations? For what lofty cause?

Trump’s abortive border wall is testament to his fear of foreigners. His documented disdain for experts suggests a long-standing intellectual insecurity, buttressed by the claim of his niece that he cheated on his SATs to get into college.

Whatever the twisted logic, the policy was Machiavellian and mean-spirited.

The threat of rejection will not be easily forgotten and the hardening of national chauvinism on both sides of the Pacific will have long-lasting effects.

Newsweek has reported that the unintended effect of such racism is to make Chinese students turn away from America’s model and embrace that of China, faults and all.

A just-completed long-term Harvard study conducted by Anthony Saich and Edward Cunningham suggests that Chinese satisfaction with their government is relatively high. According to Saich, “We tend to forget that for many in China, and in their lived experience of the past four decades, each day was better than the next.”

Viewed in this context, Trump administration actions against Chinese students will be of no benefit to the US but may indeed help Beijing to keep the best and brightest at home instead of seeking a costly education abroad.

Chinese Overseas StudentsPeople-to-People Exchange
printTweet
You might also like
Back to Top
CHINA US Focus 2022 China-United States Exchange Foundation. All rights reserved.