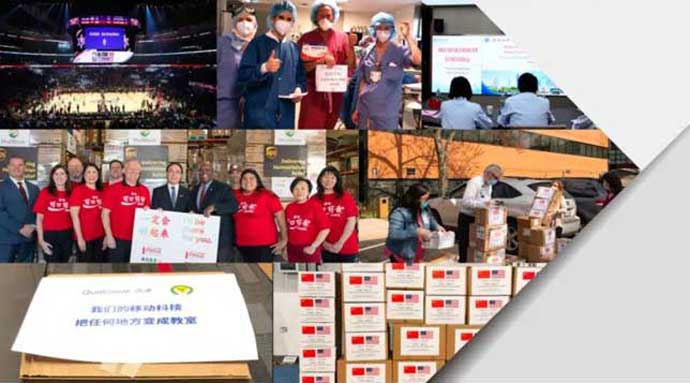 The global public health crisis brought by the coronavirus has sounded a wake-up call and underscored the importance of international cooperation in response to global challenges. China and the United States have been severely affected by the pandemic; more important, they are also crucial players in promoting international cooperation against it.

Despite the many challenges in bilateral relations and resulting restrictions on government-to-government contacts, the people of China and the United States have shown a remarkable spirit of good-faith cooperation that has not only propelled jointed efforts on pandemic control but also laid a critical foundation for cooperation between the two countries in the years to come.

In the wake of the outbreak, academics in both countries have issued a strong call for greater cooperation. In three open letters, they made a strong case for enhancing bilateral cooperation and putting aside differences. At the same time, sister states and cities, as important channels and bridges of people-to-people diplomacy, have been major contributors to cooperative efforts against the pandemic by China and the U.S.

They support each other by donating anti-pandemic supplies, expressing sympathy and sharing experiences. Business circles in both countries have been a major force for cooperation in the battle against COVID-19. As of Feb. 17 this year, 103 U.S. companies had made donations to China — including supplies and capital — totaling $76.8 million.

When the situation in the United States worsened, Chinese companies made great efforts to help American communities, either by donating supplies or by leveraging their products and services. Chinese companies, including Fuyao Group and Huawei, donated a large amount of supplies; Alibaba, Tencent and other Chinese tech companies built online platforms to support pandemic control in China, the United States and the world as a whole.

In both countries, think tanks, institutions of higher education, and NGOs have also sprung into action to help those threatened by the coronavirus. Backed by the Chinese People’s Association for Friendship with Foreign Countries and the China Friendship Foundation for Peace & Development, a Chinese think tank — the Center for China and Globalization — recently released a report entitled China-U.S. Non-Governmental Cooperation in Response to COVID-19: Current Conditions, Challenges and Prospects. It provides an overview of China-U.S. anti-pandemic cooperation.

During the launching seminar, Alan Beebe, president of the American Chamber of Commerce in China, noted that U.S. companies in China had donated more than 600 million yuan ($85.7 million) to China for pandemic control. This demonstrates the strong relationship these companies have built over the years in China and their commitment to sustained cooperation.

China-U.S. relations have become increasingly complex amid growing competition and the influence anti-globalization forces, outdated global governance mechanisms and the decoupling of global value chains. As a result, cooperation at the nongovernmental level between the world’s two largest economies face greater challenges.

But we need to recognize that China and the United States should not focus on their narrow interests. Instead, they need to maximize multilateral cooperation at the international level to pave the way for future development, not only in light of the coronavirus pandemic and possible public health crises in the future, but on many other global issues, including climate change, economic growth, trade, investment, migration  and food security.

First, China and the United States need to strengthen cooperation on pandemic control, not only by focusing on anti-pandemic measures but also by promoting the recovery of the world economy together in the post-pandemic period. The economic impact of the pandemic is enormous. According to the International Labour Organization, global working hours fell by 14 percent in the second quarter of 2020, equivalent to the loss of 400 million full-time jobs. The World Bank has warned that the pandemic and the resulting economic stagnation could push 60 million people into extreme poverty.  As the two most prominent players in global value chains, China and the United States should be more proactive in shouldering their international responsibility to maintain the stability of those chains.

Second, businesses in both countries should continue to strengthen their commercial ties to promote global economic recovery after the pandemic. China has already signaled its expanded commitment to opening its market to global investors by announcing a series of initiatives and policies — the Foreign Investment Law, the development of a free-trade port in Hainan province, the further scaling back of its negative list for foreign investment and the reduction of tariffs.

In China, the continuous opening-up policy and a huge consumer market of 400 million middle-income households provide important opportunities for the recovery of the world economy. Chinese and U.S. companies should seize the moment and leverage their complementary strengths to lead the world’s economic development after the pandemic.

Third, nongovernmental organizations and the general public in both countries should play a more active role in bilateral exchanges and do their part to enhance two-way relations. Although the spread of the pandemic has slowed around the world, there are still many restrictions on the movement of people between countries.

Some disagreements have further hindered friendly communication between China and the United States. Consequently, while strengthening high-level contacts, the two countries should ensure that channels of people-to-people communication remain open and encourage the participation of more NGOs and individuals in bilateral exchanges in ways that help reverse the downward trend of relations between the two countries.

The coronavirus knows no borders, nor does it discriminate between race, color or wealth. For China and the United States, in the face of this threat — a common enemy of humanity — the surest way to achieve domestic development and promote global economic recovery is to set aside differences in favor of more cooperation.

As the driving force behind bilateral cooperation in combating the coronavirus, NGOs should continue to play their role in sending messages of friendship and goodwill and promoting cooperation.