China’s Waste Import Ban: A Wake-up Call, But for Who? 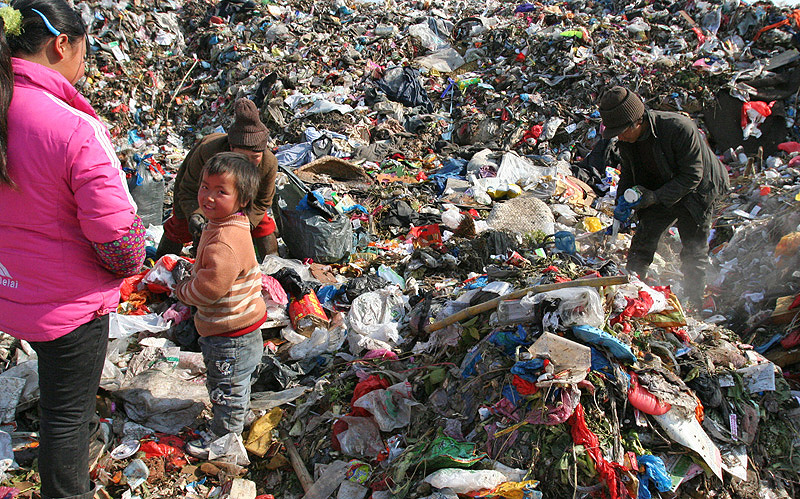 In April 2017, China’s Central Leading Group for Comprehensively Deepening Reforms approved a plan to prohibit the import of garbage. The plan set out a timeline, a detailed account of the steps to take, and identified the ministries responsible for implementation. On the very same day, China issued a notification to the World Trade Organization (WTO), asserting their urgent need to “adjust the imported solid wastes list, and forbid the import of solid wastes that are highly polluted,” for the sake of “China’s environmental interests and people’s health.” The fact that the plan was issued by such a high-level agency is unusual, but it sends a clear message of urgency and resolution from the central government.

According to a report by China Daily, China imported about 56% of the world’s solid waste in 2016 to supply the country’s need of productive resources since the 1980s. The proposed reforms set out to change that, replacing solid waste imports with domestic resources by the end of 2019. After years of rising regulations and increasing inspection efforts, this policy is a drastic step forward. But why is China cracking down on these lucrative imports? U.S. industry insiders argue that China’s motives are as much about economics as about domestic environmental issues. By banning waste imports, China is hoping to improve the quality of imported recyclables, which will have the effect of reducing sorting costs while also reducing the amount of waste that ends up in Chinese landfills.

Unsurprisingly, the ban has prompted some strong reactions internationally, especially from developed countries that export large quantities of waste to China. Media outlets and industry leaders worldwide have weighed in, many expressing a sense of panic and claiming that the ban will leave exporting countries on the brink of a “waste crisis.” Optimists suggest that this is “a chance to slash waste” and move toward a new recycling era, while China’s news media is simply stating that other countries will “have to adapt,” and begin to take responsibility for disposing of their own waste.

This hard talk comes after decades of silence from the Chinese government. The responsibility for waste recycling has long been neglected by the central and local governments, and in the absence of an effective system led by local authorities, migrant laborers and migrant entrepreneurs have picked up the slack. Today, much of the recyclable waste in China’s major cities is sorted, processed, transported, and traded by migrant laborers in an informal waste recycling economy that operates successfully yet with a serious lack of oversight or supporting infrastructure. The work these migrants do is valuable and necessary, but they have long been looked down upon and discriminated against. Until recently, the Chinese government was content to let this system remain the status quo, however, when the recent “low-end population” crisis forced many migrants out of the waste and recycling sectors, a vacuum was created that desperately needed to be filled as rubbish started to pile up near cities. In Beijing alone, migrant-run recycling reduced residential waste by at least 40% based on our fieldwork. Many live in suburban villages and thus were subject to the push-out by the local government following a fire in a migrant community in 2017.

Too often, policy makers think of environmental and social problems as independent issues. China’s waste ban exposes an intricate nexus of social, economic, and environmental issues on multiple geographical scales, and yet for optimists, it offers an opportunity for more innovative solutions. As I argued in a previous op-ed for China-US Focus, the “low-end” or “dirty” sectors — the “undesirable” spaces that city planners want to eliminate — are not the culprit in China’s urban, social or environmental challenges. The increasingly affluent and consumerist, yet highly unequal, cities and a lack of effort in promoting public awareness and incentivizing interest in recycling are more culpable. Similarly, the trash ban will help partially relieve the Chinese state from the headaches of mounting trash and environmental concerns temporarily, while also forcing Hong Kong to reconsider its entrepot role in the trash crisis. A long-term solution that benefits China and other countries would have to hinge on an understanding of the city as a potentially fair environment in which all groups can claim their social, economic, and environmental rights. It is imperative that the interests of those whose work has been largely ignored be fully recognized and integrated into China’s future urban plan. And, there are practices elsewhere in the world wherein the integration of informal recycling into a more efficient recycling system, while offering both employment opportunities for the poor and benefits to all, are feasible. As China enters the next urbanization stage, failure to address these social and environmental issues in an integrated manner risks persistent social divides and environmental injustice.

China Environment
printTweet
You might also like
Back to Top
CHINA US Focus 2022 China-United States Exchange Foundation. All rights reserved.