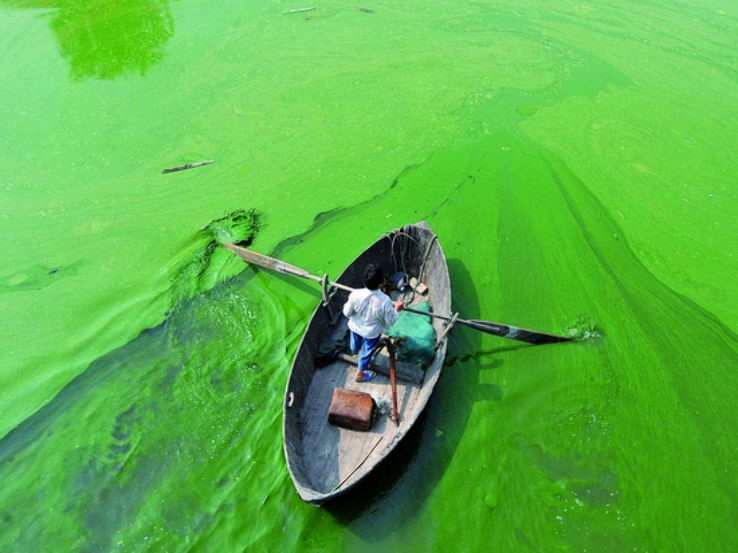 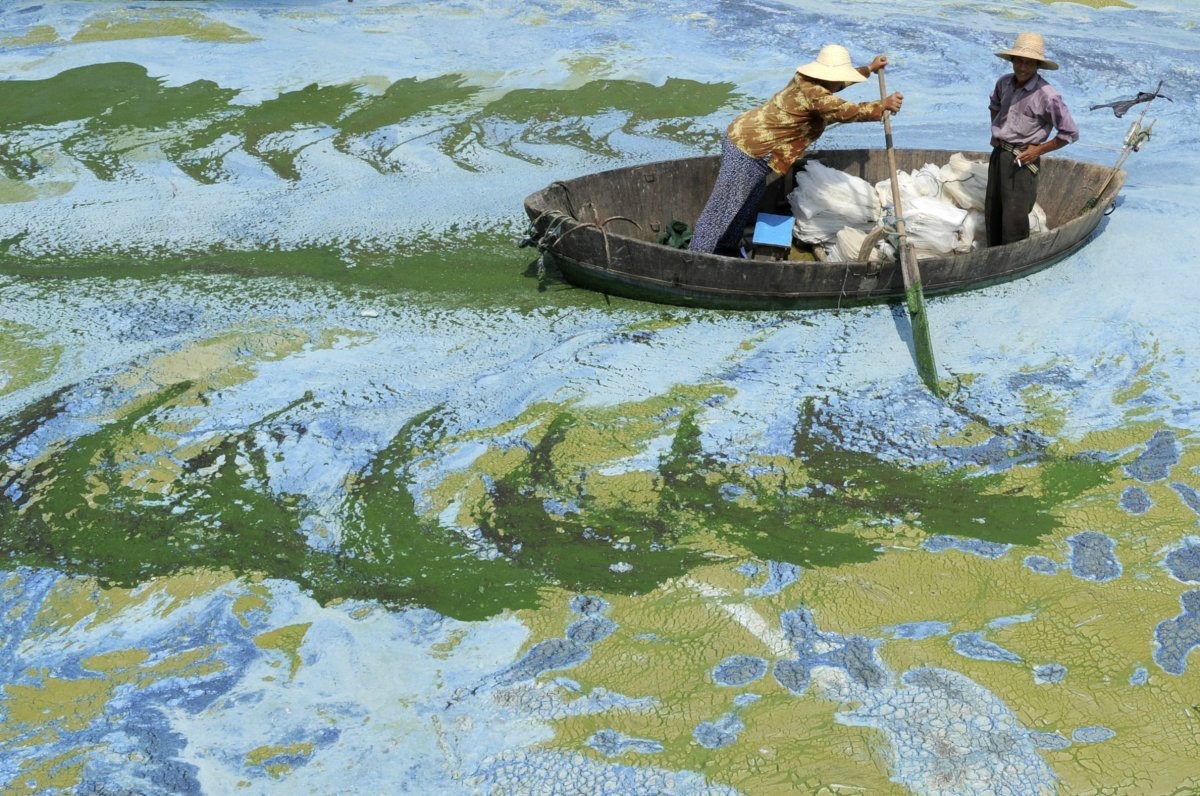 The beaches of Rathbun Lake in the U.S. state of Iowa in August are typically a bustling scene. Their sandy surfaces speckled in a colored collage of towels and their air enveloped in the shouts and music of tourists clad in bathing suits. However, this August the beaches echo with emptiness. Tall fencing and yellow warning signs have replaced summer recreation. The words “Warning water quality advisory: blue-green algae bloom. For your safety, do not swim.” surround the area. Travel to the beaches of Lake Chao in Heifei, China, and you will find the very same warnings.

Blue-green algae, toxic cyanobacteria, have become a severe health risk to both American and Chinese citizens. Blue-green algae have become one of the primary sources of water toxicity in Chinese and American freshwater lakes. However, Chinese researchers may have found a solution, a virus known as Mic1.

The groundbreaking discovery of the Mic1 virus occurred in the least likely of places, Lake Chao.  Lake Chao is one of the lowest ranking bodies of freshwater in China due to persistent blue-green algae blooms. Nearly every summer, the lake transforms into a thick swirl of fluorescent green. The local drinking water becomes poisoned, fish die, and a pungent odor persists. This month scientists from the University of Science and Technology of China released a report revealing the discovery of the previously unknown Mic1 in Lake Chao. Mic1 is an algae-eating virus, one that could be bred and used to combat blue-green algae outbreaks.

The Mic 1 virus has an oversized head and elongated tail. The virus uses its tail as an anchor while it injects its DNA into a blue-green algae cell. The virus then furiously multiplies until it tears its host apart and moves on to consume other blue-green algae cells. According to the researchers, “Mic1 can infect, suppress, or kill blue-green algae” . Cao Xihua, a researcher in marine ecology and environmental sciences, stated: “The new discovery is very useful, it provides a possible approach to solving what is a serious environmental threat in many places around the world.” Unbridled, blue-green algae pose an alarming risk to the stability of U.S.-Chinese trade as well as to the financial and physical health of both countries’ citizens.

Blue-green algae toxicity is capable of rendering freshwater lakes and reservoirs undrinkable. 68% of community water system users in the U.S. receive their water from a surface water source, such as a lake, and the majority of Americans are community water system users.  As the number of blooms increases, so does the chance of losing access to drinking water. Already U.S. cities have experienced water scarcity from blue-green alga blooms. In July 2018, Greenfield, Iowa, went without drinking water due to a bloom that smothered the lake, which feeds the town's water supply.

Similarly, in 2007, 100,000 residents in the northeastern city of Changchun went waterless when blue-green algae bloom occurred in a critical reservoir. The same year the drinking water of Wuxi, Jiangsu, was contaminated, forcing millions of people swarming to buy bottled water. Long term exposure to blue-green algae infested water puts humans at risk for cancer, liver failure, sperm damage, and in rare cases, even death. In a global economy, water scarcity such as this can gravely impact international trade.

In a 2016 report for the OECD economists Thomas Hertel and Jing Lui concluded, water is linked to many economic activities, and through complex channels affects economic growth. Blue-green algae blooms significantly harm the Chinese and U.S. fishing industries, increasing the vulnerability of food trade between the U.S. and China.

China has been the world’s leading exporter of fishery products since 2002, in the past decade, the number of people who work in China’s fishing industry has increased by more than 10 million. Imports from the U.S. account for 18% of total Chinese fishery market shares with a value of nearly $1.2 billion. Yet blue-green algae remain a peril to the Chinese-U.S. fishery trade. Algae blooms can deplete Chinese freshwater of oxygen, reducing fish stocks, increasing the cost of Chinese fishery exports, and decreasing American demand.

Blue-green algae also contribute to food export rejection in the U.S. from China. Fishery products are the second most rejected food export from China by the FDA, and one of the leading reasons is the presence of toxic substances, including those produced by blue-green algae blooms. Lake Dianchi is an unfortunate example of the collapse of a fishing economy due to blue-green algae. Lake Dianchi was once the source of prized shrimp and a source of steady income for nearby residents. The delicate shrimps were sold to high-end restaurants in Beijing and abroad. Now the lake’s shrimp and fish are inedible due to high levels of toxins from blue-green algae. To reduce toxins at Lake Dianchi, the Chinese government has spent $660 million, yet the full restoration of the local fishing industry is ongoing. Food export rejection is considered one of the most significant barriers to sustainable international food trade.

Likewise, in the U.S., catfish farming is the largest aquaculture industry in the United States, with an annual production valued at $450 million. Blue-green algae blooms are the second largest cause of economic losses to the U.S. catfish industry. They have been estimated to result in as much as $72 million in annual financial damages to the industry. The cost of algae blooms to the U.S.  catfish industry does not bode well for U.S. fisheries that are increasingly impacted by Trump’s trade war. “U.S. fishery exports to China declined in the last quarter of 2018, mostly in response to importer reluctance to purchase U.S. seafood due to the uncertainty in the U.S.-China trade relationship and the additional tariffs”.

Mic1 has the potential to solve and alleviate these problems, yet currently, the growth of blue-green algae in Lake Chao has outpaced the spread of the Mic1 virus. Today, scientists can artificially breed Mic1, but only up to a point. Furthermore, according to Dr. Jiang Yongliang, a life scientist at the Heifei National Laboratory for Physical Sciences, Mic1 can only destroy two known strains of blue-green algae. To combat these problems, researchers hope to modify the virus' genes so that it can infect a broader range of hosts.

Mass application of the Mic1 virus is still far in the future. Yet its discovery marks one of the first breakthroughs in the fight against the blue-green algae epidemic that haunts China and the United States. As scientists from the University of Science and Technology of China continue to study Lake Chao, the end of toxic algae blooms may become a reality, a conclusion that would lead to better economic and resources stability in the United States and China.

China Environment Protection
printTweet
You might also like
Back to Top
CHINA US Focus 2022 China-United States Exchange Foundation. All rights reserved.