The Paradox of Deep-sea Mining

Deep-sea mining is perhaps one of the most uncomfortable major environmental issues today because of the paradox it creates between climate change and innovation. Mine the deep sea, and we gain access to the metals necessary to produce advanced technology at scale . But through the mining process, we also simultaneously destroy fragile, barely-catalogued ecosystems. These deep-sea regions are known to hold a variety of organisms with uses in everything from medical treatments to plastic pollution clean-up. Among the unique organisms endemic to the deepest zones of the ocean are microbes that have given us a key enzyme used in the tests to diagnose COVID-19. Similarly, the ocean floor has yielded bacteria effective in treating Middle East Respiratory Syndrome (MERS), another coronavirus that emerged in 2012, in addition to more than forty marine compounds currently being tested in anticipation of a COVID-19 vaccine discovery.

China sits right at the center of this debate. The China Ocean Mineral Resources Research and Development Association (COMRA) was established in 1990 and has been signing mining exploration contracts with the International Seabed Authority (ISA), the global authority that governs deep-sea mining, since 2001. Over the past two decades, China has expanded its number of exploration contracts and now holds five, the most of any country in the world. Given this advantage of elevated access, in addition to the fact that China has been researching deep-sea mining practices since the 1980s, China has handily established itself as the leader in the field of deep-sea mining. 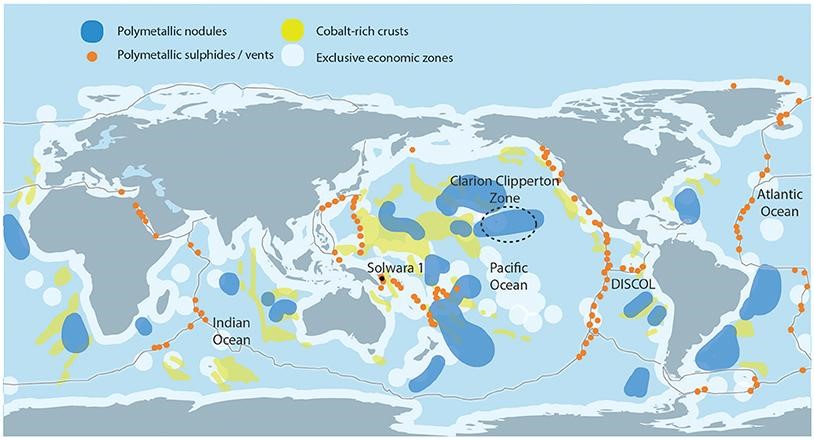 The deep-sea mineral deposits that could be mined span the globe, though areas such as the Clarion Clipperton Zone have drawn particular attention. Source: Hein et al. (2013)

Despite the lack of established mining operations, even current explorations raise a number of issues. Among the most salient is that although all current mining-related missions to deep ocean regions are “exploratory”, they still involve bringing heavy equipment to the seafloor that damages the flora and fauna. The equipment, weighing as much as 340 tons, stirs up toxic sediment that migrates and disturbs other oceanic ecosystems, reduces the ocean’s capacity to store carbon, and destroys fragile deep-sea ecosystems that required anywhere from thousands to millions of years to form.

Some of the equipment used in deep sea mining exploration. Source: The Guardian.

Given the inevitable ecological issues associated with deep-sea mining, it may seem inconsistent for modern-day China to take such an active role in spearheading this new mining approach. Since Chinese President Xi Jinping took office in 2013, he has made a point to establish China as an environmental leader on the global stage. From Xi’s emphasis on creating a “green Belt and Road” to his call for China to develop as an “ecological civilization”, he has made it clear that China wants to be seen as a leader in creating better environmental standards. 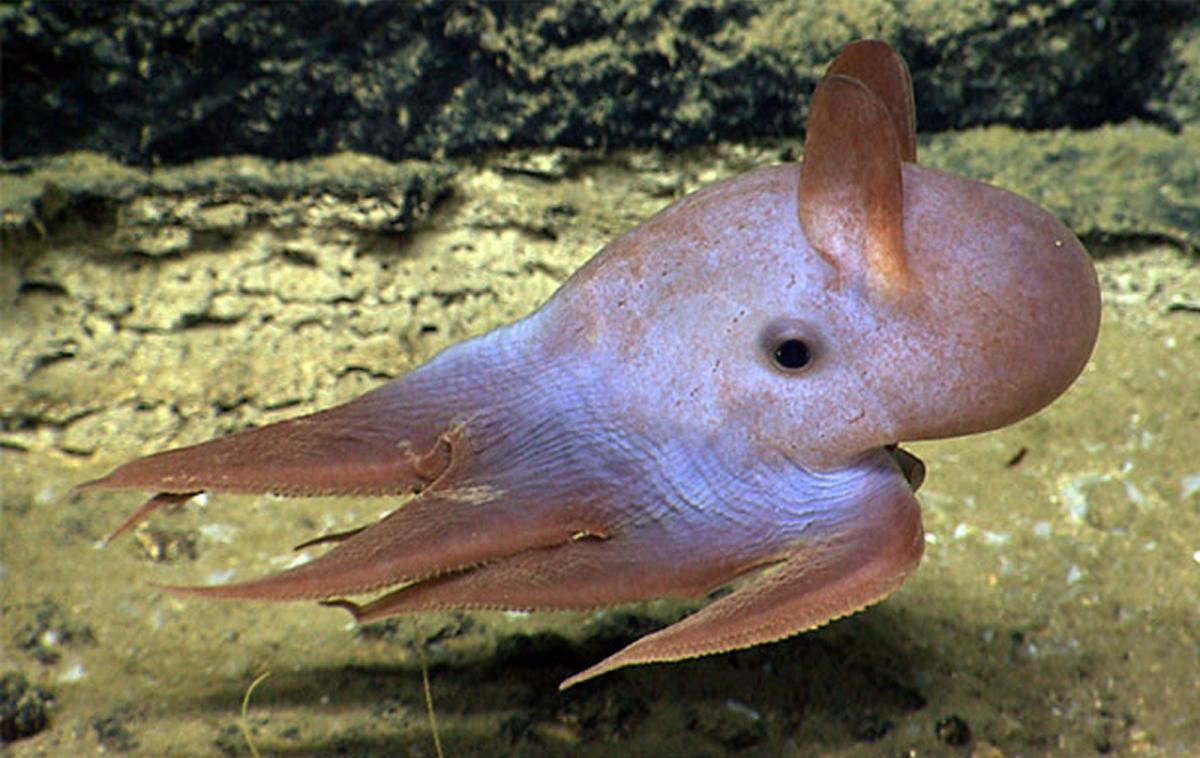 The dumbo octopus is among the countless species of deep-sea organisms that have yet to be studied in detail. Source: Oceana

China has sought to stand out in the areas of marine and biodiversity protection in particular. It will establish a unified national park system this year, including areas like Sanjiangyuan that will rank among the largest national parks in the world. Further, China was set to host the 2020 Convention on Biodiversity (CBD) COP15 this October (now delayed indefinitely, due to COVID-19). This event represented a chance to cement the nation’s leadership in biodiversity conservation and further promote the nature-based solutions (NbS) that it has advocated as climate change mitigation measures.

On the other hand, as a leader in environmental protection, China has also become the largest global producer of electric vehicles (EVs). EVs require, on average, 187 pounds of copper, 123 pounds of nickel, and 15 pounds each of manganese and cobalt per car, according to Gerard Baron, the CEO of the Canadian deep sea mining company DeepGreen. By Baron’s estimate, full-scale production of electric vehicles, one of the major citizen-oriented approaches to reduce carbon dioxide, nitrous oxide, and methane emissions from transportation, will not be possible without the metal resources that the deep sea holds. 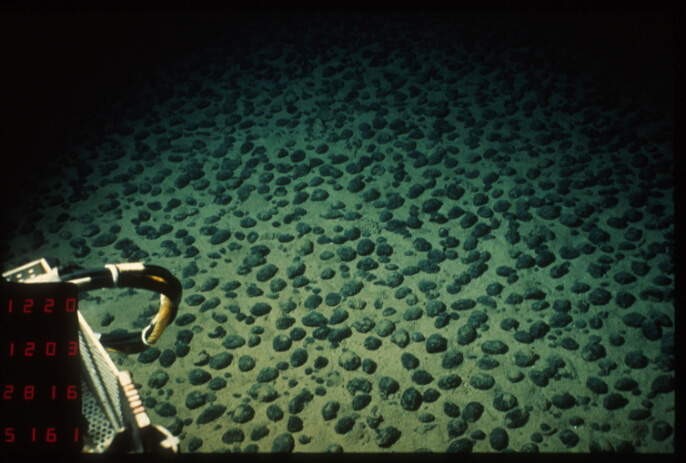 Companies like DeepGreen believe that harvesting the polymetallic nodules seen here is necessary in order for a green energy transition to occur. Source: Mining Technology

This context leaves China in an environmental protection catch-22. The allure of vast amounts of new metal resource availability is difficult to ignore. From a financial perspective, the linear connection between lithium-ion batteries, a growing electric vehicle market, and economic gains seems far more appealing than the less tangible universe of opportunities that yet-to-be-analyzed deep-sea organisms offer the field of science. The case for biodiversity protection is further addled by the greenwashing of deep-sea mining as well as the legitimate claims that it could aid in lessening human suffering by eliminating the practices of child labor and destruction of indigenous lands that occur regularly in mining operations today.

According to Fauna and Flora International, one area of metal supply chains that has not received sufficient attention thus far is the recycling of metals necessary for lithium-ion batteries. In the organization’s most recent report, the authors add that further innovation in technologies that do not rely so heavily on scarce resources like these metals is essential. Last year, when he was awarded the Nobel Prize in Chemistry for his work on lithium-ion batteries, Akira Yoshino emphasized that “the point is whether EV batteries can be recycled.” According to experts, the current reason for the low rates of lithium-ion battery recycling – estimated at less than 5 percent in the European Union and the United States – come down to technical constraints, economic barriers, logistic issues, and regulatory gaps.

China is already working to build a stronger domestic recycling industry. If it were to channel the effort it is currently putting into exploring deep-sea mining opportunities instead toward further developing its battery-recycling capacities, the need for more metal resources would no longer be as pressing. The loss of revenue from the decision not to mine the deep sea could potentially be recouped by taking advantage of the scientific research opportunities afforded by the deep-sea regions where China has exploration permits. Through an alternative approach to deep-sea mineral access, China could remain true to its claims of prioritizing the building of an ecological civilization, biodiversity protection, and advocating for nature-based solutions to climate change.

Today, more than 80 percent of the world’s oceans remain unmapped, unobserved, and unexplored. To demolish the possibilities these regions hold for science and human advancement without even fully understanding what is there is a shortsighted approach that will inevitably come to be seen as regrettable in the long-term. As a leader in both exploratory deep-sea mining and biodiversity conservation, China is well-positioned to set in motion a new wave of innovation for smarter approaches to metal and mineral-sourcing. The key for China is to not put its priorities on climate change mitigation and biodiversity protection at odds with one another.

China Environment ProtectionEnvironmental ProtectionSustainable Development
printTweet
You might also like
Back to Top
CHINA US Focus 2022 China-United States Exchange Foundation. All rights reserved.