A Cool Head on China-US-EU Interactions 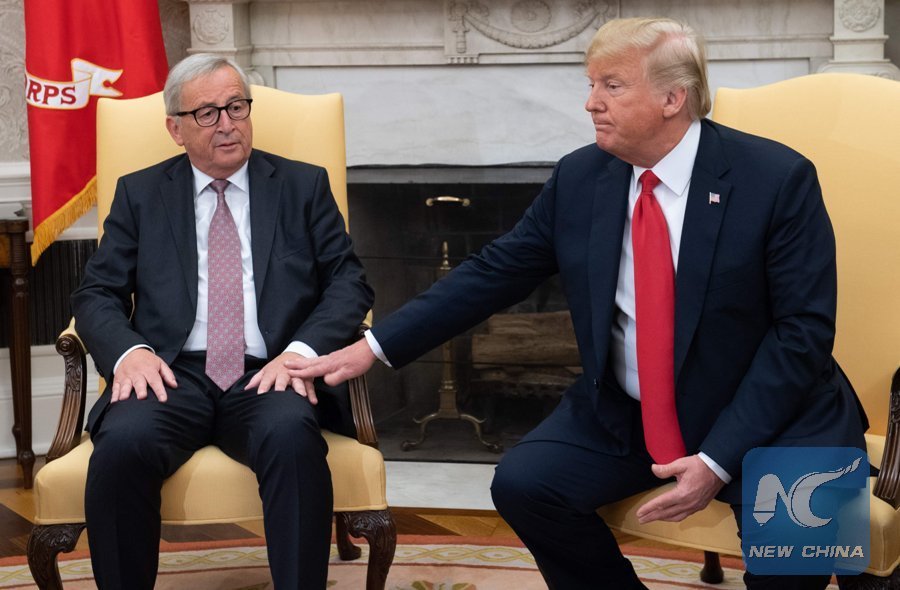 US President Donald Trump's July 25 meeting with EU President Jean-Claude Juncker and the joint statement they  released afterwards have attracted attention in the US, Europe, and China. Ever since the Trump administration launched trade wars against China and the EU, serious economic tensions have emerged between the world's three largest economies. At this juncture, the type of trade agreement the EU and US will be able to reach is a matter of broad concern.

The US-EU alliance belies the difficulties the two countries face in reaching a trade agreement. After the US announced on June 1 that it would impose higher tariffs on EU steel and aluminum exports, the EU retaliated by levying tariffs on €2.8 billion ($3.3 billion) worth of US products on June 22. Despite the fact that Juncker has since succeeded in preventing the trade war from escalating further, it has by no means ended. And although Juncker and Trump have committed to the "three-zeroes” — zero tariffs, zero non-tariff barricades, and zero subsidies for non-automobile industrial products — this goal is unrealistic, and its prospects remain uncertain.

The “three-zeroes” are unrealistic because the US and EU  are both world-class economies, and competition between them has always been fierce. During the Obama administration, the US and EU tried to pass ambitious trade agreements such as the Transatlantic Trade and Investment Partnership (TTIP); yet, four years of negotiations failed because neither party made concessions. Trump, on the other hand, has been preoccupied with his policy of "America First" since taking office. As a result US-EU economic competition and conflict has worsened. Trump has not only brushed the TTIP aside, but also labeled the EU an American "foe" in trade and an "economic rival". Therefore, building a trans-Atlantic Free Trade Agreement (FTA) will be difficult to accomplish. In fact, immediately following the Trump-Juncker meeting, French President Emmanuel Macron stated that his country will not undertake any trade-related negotiations with the US under current conditions. Macron insists that the US must abolish high tariffs on EU steel and aluminum products as a precondition for any such negotiation.

The “three zeroes" prospects are uncertain because many European nations believe that, because Trump is contradictory and capricious, the joint statement cannot be trusted. Indeed, The Guardian pointed out that Trump has proven to be an unreliable negotiating partner. Taking the China-US trade talks in May as example, the paper noted that even though Washington twice declared it had struck trade deals with Beijing, both deals were ultimately scrapped by Trump himself.

As differences between the EU and the US have grown, the EU has displayed willingness to cooperate with China. Chinese and overseas media routinely speculate that China and the EU are building a united front against the US. Alternatively, some analysts assume that the EU will sign economic agreements with Japan and the United States to contain China.

Despite such predictions, China and its media must maintain a cool head, as the China-EU-US relationship is far more complicated than it may seem initially. First, even though the EU has strong incentives to stop the economic wrangling with the US, Europe will not easily accept all of Trump’s demands, because the EU’s trade policy is fundamentally different from the Trump administration's. Unlike Trump, but like China, the EU sees rules-based multilateralism as its lifeline, and thus resolutely defends the WTO’s role in trade dispute arbitration. Furthermore, China supports European integration, while Trump harbors an instinctive animosity against the EU because it is a multilateral organization. Clearly, there is great potential for China-EU cooperation on the international stage. In fact, China and the EU have already begun cooperating on trade, climate change, and the Iran nuclear issue. However, it is also important to remember that, despite serious economic conflict between the US and the EU, as well as Trump's demand that NATO members dramatically increase defense spending, NATO will not dissolve, and will continue supporting the EU-US political and military alliance. Furthermore, the EU's complaints about China over economic and trade ties are very similar to the US’. Trump and Juncker’s joint statement was widely believed to have targeted China as they vowed to address unfair trade practices such as "intellectual property theft, forced technology transfer, industrial subsidies, distortions created by state owned enterprises, and overcapacity”. To sum up, it is important to appreciate that the US, EU, and China, all have interests in common as well as disagreements.

China-U.S.-Europe RelationsTrade War
printTweet
You might also like
Back to Top
CHINA US Focus 2021 China-United States Exchange Foundation. All rights reserved.