A Reevaluation of the Size of the Chinese and Russian Economies?

The war in Ukraine, along with sanctions directed at Moscow have undoubtedly prompted economists to reevaluate the greater Russian economy, and its significance to the rest of the world. At the same time, Beijing has noted the collective West’s treatment of Russia, and is likely considering what types of sanctions Beijing would face in the event of a similar invasion of Taiwan. All at the same time, the BRICS nations and other ‘regional leaders’ have supported the idea of greater global multipolarity, hinting that the U.S.-led world order is in fact diminishing in significance and influence as the war in Ukraine rages. One of the most interesting aspects of these fast-moving global changes is the impact of sanctions in global food, energy, and goods prices. President Trump, and the impacts of the coronavirus pandemic, first began causing supply chain disruptions due to lockdowns, but the China trade war also hindered globalization’s potential. Now, these preexisting challenges are combined with global food, fertilizer, and energy shortages as sanctions on Russia seem ineffective while Moscow props up the ruble and continues on with business as usual. This leads us to reevaluate the Russian and Chinese economies in greater detail to see how significant they are to the rest of the world.

The Russian economy, in terms of size, has often been compared to that of smaller European nations. However, it is possible that this is an inaccurate approach in comparing economies. Similarly, the Chinese economy, in terms of GDP, might have been underestimated and misjudged all these years. Presenting the possibility that perhaps the two great Eurasian powers of China and Russia actually have much larger, and much more significant economies. When we eliminate the exchange rate factor, and diminish the ridiculous focus on services, which during periods of crisis, appear less significant, both the Chinese and Russian economies are much bigger than previously anticipated.

French economist Jacques Sapir raised the possibility that the war in Ukraine forced the realization that the Russian economy is actually much more important than economists previously believed. In truth, exchange rates created unrealistic comparisons which presented the Russian economy at a disadvantage. When you take Russian rubles, in terms of gross domestic product, and exchange them into U.S. dollars, then the Russian economy is about the size of Spain’s economy, which seems rather insignificant. However, methodologically, one can use purchasing power parity (PPP) instead, while also emphasizing the ‘importance’ of an economy by paying less attention to the services sector and focusing on commodities and the industrial sector, which the services sector needs to actually survive. If we JUST use purchasing power parity as the new metric, the Russian economy immediately looks more like the German economy. Once we refocus on commodities and industry, rather than overvalue services, the Russian economy is bigger than the German economy and represents about five to six percent of the world’s economy, according to Sapir.

If accurate, this approach reveals that Eurasia is at an incredible advantage when paired against Western Europe and the United States. Washington and Brussels excel in the current order, when banking and global finance are incredibly important, but if China and Russia pivot the world to a multipolar order relying on industrial potential and commodities, financials will not matter as much. We observe this when we realize that the U.S.-led sanctions against Russia have been somewhat ineffective. The entire Western world, although it does not represent a majority of the globe’s population, does control the international financial system, but nonetheless failed to ‘crash the Russian economy’ and ‘stop Putin’s war machine.’ China sees this level of infectiveness and it only reveals how simple it is for a country to remove itself from such structures to rely on autarky or trade and do business more with like-minded nations. Russia is creating a template for more nations to remove themselves from the international financial system which can be weaponized by Washington, as it has done in the past with Iran, Russia, and China.

Ironically this will force a revaluation of the Russian economy that's very much in Moscow’s favor. It's also interesting to revalue China's economy through that lens. If we look at the Chinese economy simply based on exchange rates, it is a $17.7 trillion economy to the U.S.'s $23 trillion. If we use PPP instead of just GDP based on exchange rates, we find that the Chinese economy is at $27 trillion, meaning that it is 20 percent larger than that of the U.S. If we revalue it by diminishing the focus on the service sector, which stands at around 54.5 percent of overall GDP, we find that the Chinese economy could be about 30 percent of the world’s economy instead of the 18 percent we assume it to be.

*** Chinese share of global GDP when adjusted to PPP***. 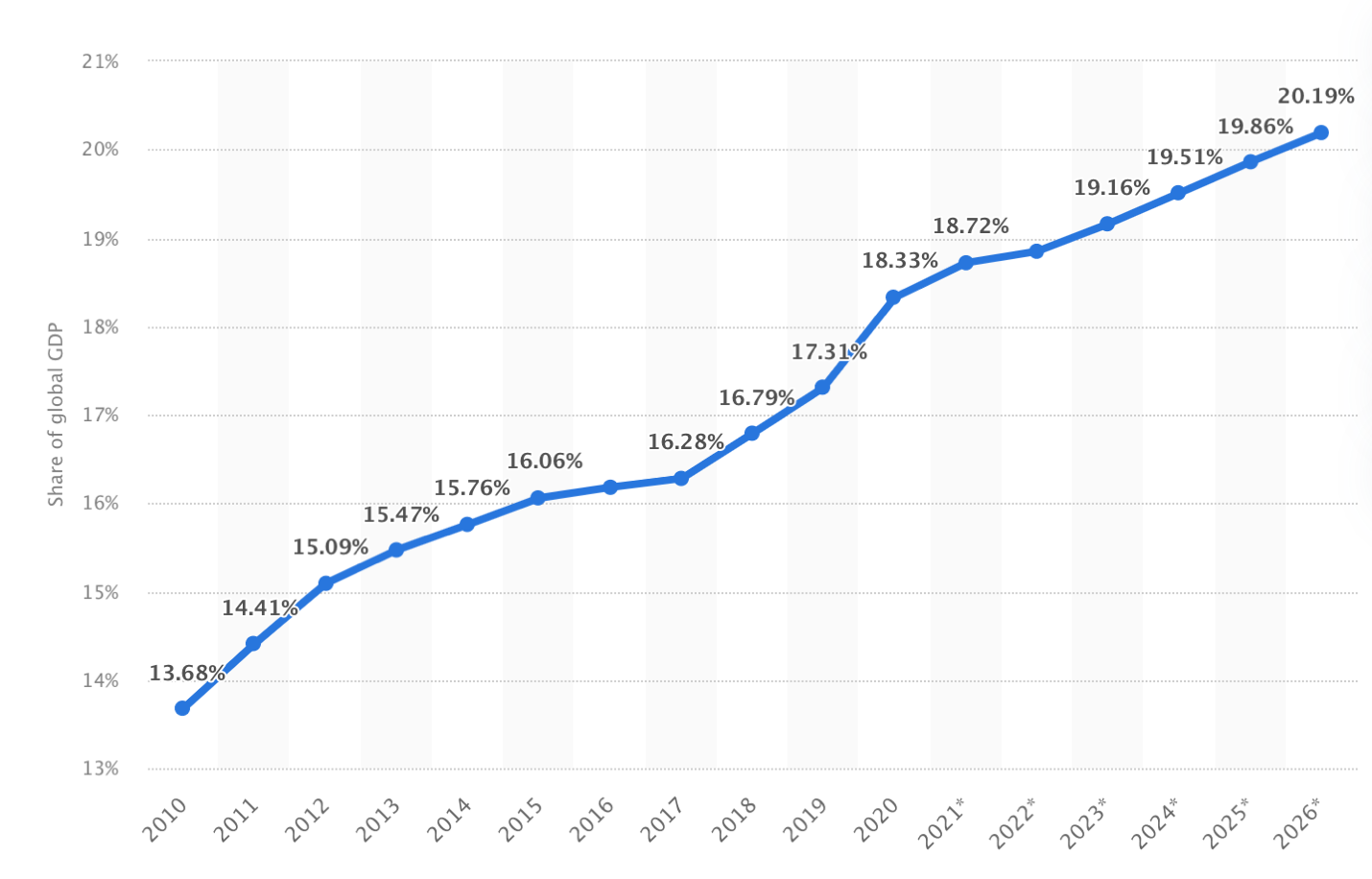 If we combine China and Russia within this methodology, we find that they represent 35 percent of the world economy when using PPP and compensating for the over-valuation of the service sector. The U.S. is heavily services-oriented with 77 percent of the value in services with the EU at 70 percent focused on services, suggesting that the collective West might only represent about 25 percent of the world economy. In the United States, the tech sector has fluctuated with such volatility over the past year, that one can legitimately question its credibility altogether. When crises arrive, the world realizes how crucial commodities and the industrial sector are, while diminishing the importance of the services sector. This leads to a very precarious economic situation in the West, as outlier nations band together to become more resilient to Western sanctions. Just like Russia relies on industry and commodities, China can rely on manufacturing in the face of more aggressive Western sanctions. This means that the EU and U.S. are somewhat dependent because of their geographic positioning. Services are crucial to the EU economy and account for around 70 percent of the EU’s GDP, which means that the EU is dependent on commodities and manufactured goods from both Russia and China to make this economy work. This reality puts Eurasia in a decent position despite global instability caused by the war in Ukraine. Time will determine the macroeconomic and geopolitical realities in the post-war in Ukraine period, but it is not as grim for China or Russia as most media outlets would like you to believe.

*** Current Estimation of US Economy Breakdown  of GDP by Sector*** 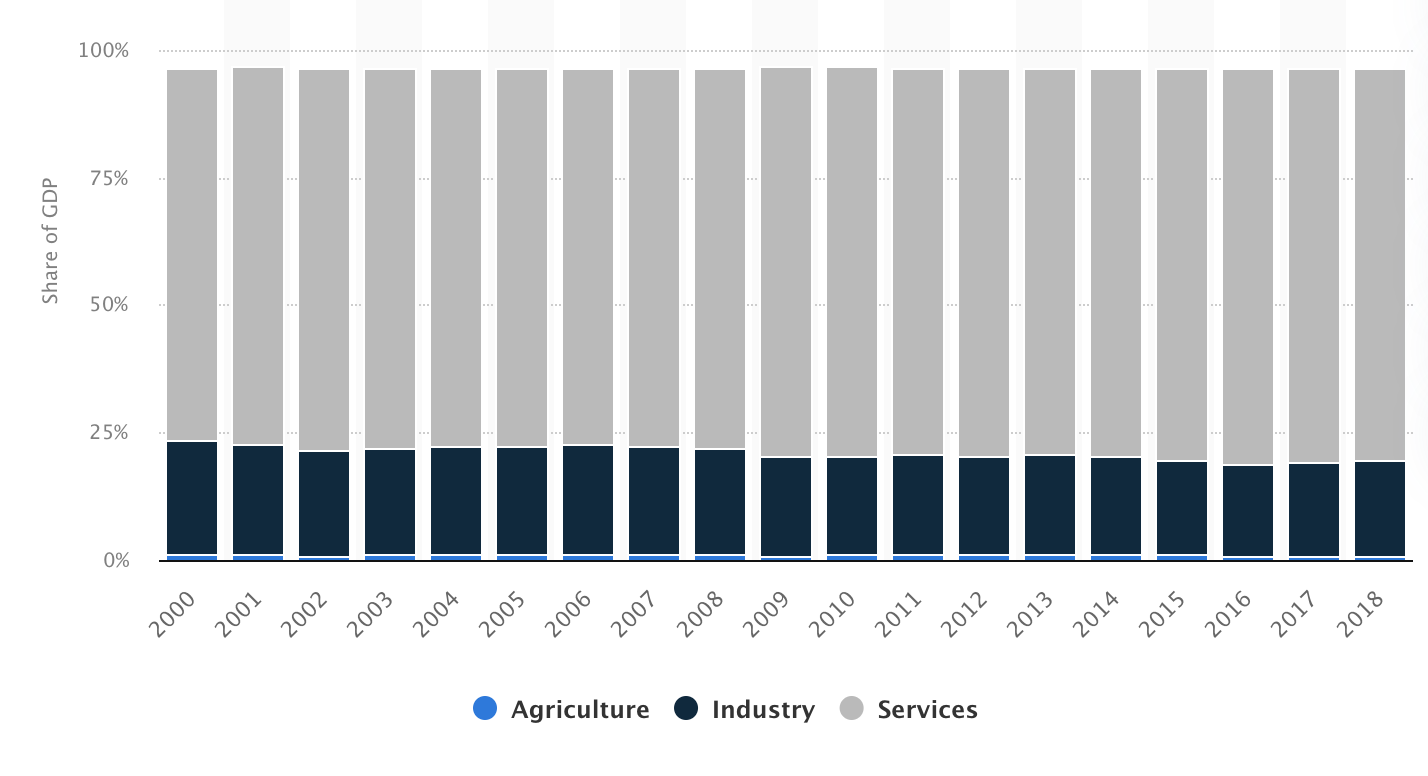 *** Current Estimation of Russian Economy Breakdown of GDP by Sector*** 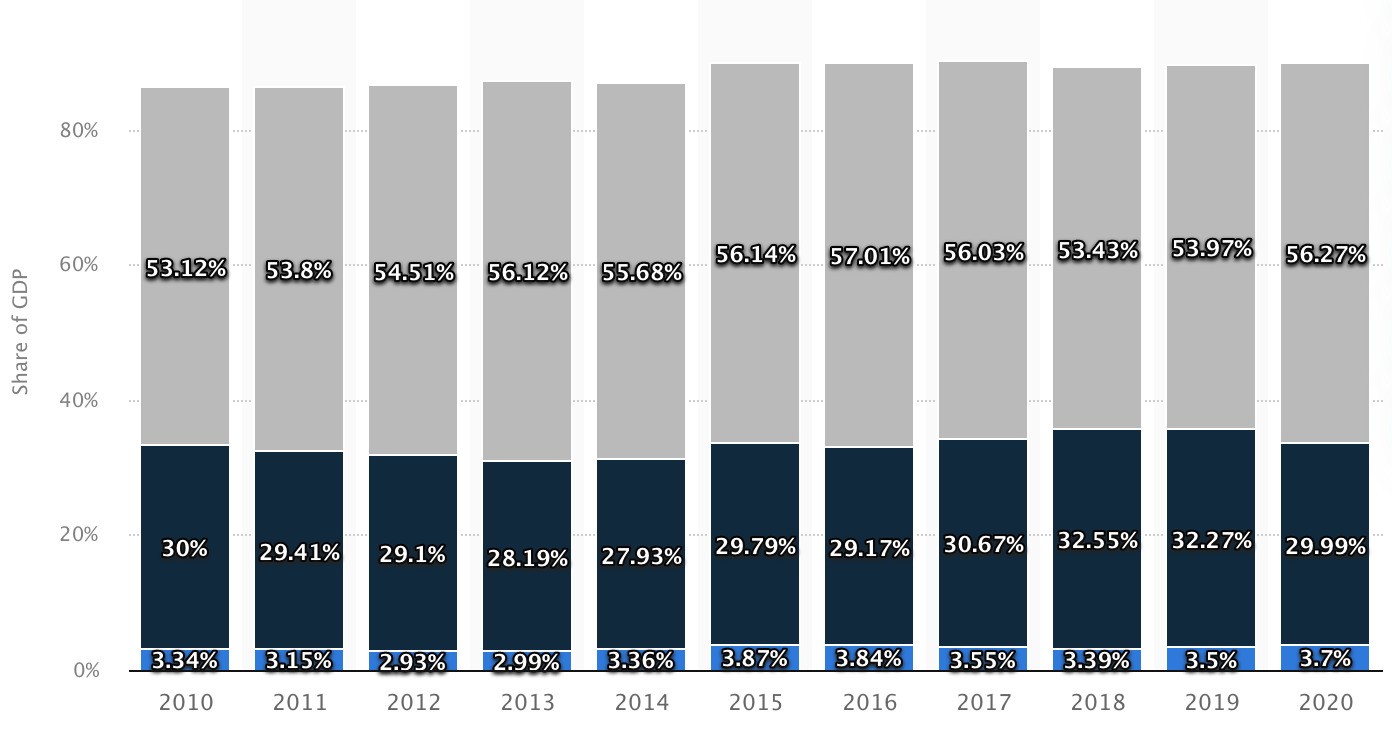 China-Russia RelationsRussia SanctionsGeoeconomicsGeopolitics
printTweet
You might also like
Back to Top
CHINA US Focus 2023 China-United States Exchange Foundation. All rights reserved.