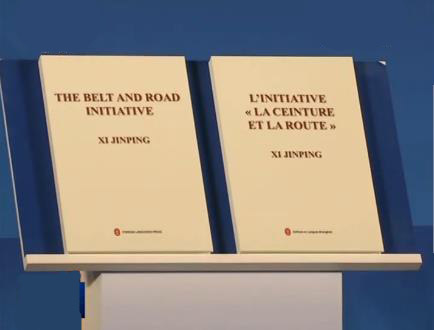 The English and French editions of a compilation of President Xi Jinping's discourses on the Belt and Road Initiative were published on April 24. The book contains 42 articles from September 2013 to July 2018 by Xi.

Foreign friends ask me: will China be more like the West in the future, or more like itself? Is the Belt and Road Initiative (BRI) China’s own vision of world order?

The pursuit of the BRI has a key role in the development of the world economy. To get rich, first build roads; to get rich quickly, build high-speed roads and railways; to get rich in a flash, build communication and information networks. This is how China has been getting rid of poverty. Putting infrastructure first, opening the economy through development zones, upgrading industry chains, launching investment and trade facilitation negotiations, forming an interconnected Eurasian market, and expanding to Africa and Latin America—that is the Chinese development model as manifested in the BRI.

McKinsey & Company estimates that by 2030 $57 trillion will need to be spent on roads, bridges, ports, power plants, water systems, and other infrastructure in order to keep pace with the expected rates of global growth. This figure is nearly 60% higher than the investment over the past 18 years and exceeds the valuation of existing infrastructure.

In developing Asia, rapid urbanization has created tremendous need for new infrastructure. The consulting firm Frost & Sullivan predicts that electricity demand will increase by 60% between 2011 and 2030, and demand for new urban transport solutions is expected to increase by 68%. This means that if such solutions do not materialize, urban residents can expect to spend 50% more time in traffic.

The four key technologies of the next decade – the Internet of Things, blockchain, artificial intelligence, and augmented and virtual reality – will be important building blocks.

American strategist Parag Khanna argues in his book Connectography that investment in infrastructure over the next 40 years will exceed that of the past 4,000 years! If tariff reductions through traditional globalization can drive the world economy to grow by up to 5% annually, then interconnection through the new globalization could drive the world economy to grow by 10 to 15%. Therefore, BRI provides a strong driving force for globalization, and promotes the reform of the traditional globalization process, making development more open, balanced, tolerant, and inclusive. McKinsey has predicted that if infrastructure hardware and software are successfully implemented in those countries along the “Silk Road” route, then by 2050 BRI countries will account for 80% of GDP growth and bring 3 billion more middle-class consumers into the world. McKinsey also claims that infrastructure construction will produce a multiplier effect, estimating that every $1 billion in infrastructure investment can create 30,000 to 80,000 jobs and add $2.5 billion in GDP.

“The business of America is business”—a point that Donald Trump’s election as president illustrated well. If BRI is the world’s largest business opportunity, how can the United States miss it?

At present, 124 countries and 29 international organizations have signed 172 BRI cooperation agreements with the Chinese government, including nearly 20 countries agreeing to jointly develop third-party markets, as well as countries that have signed cooperation agreements in certain fields, such as the United Kingdom. China has set up BRI investment rules with almost all 176 countries with which China has established diplomatic relations. The United States risks becoming a lonely superpower!

Americans, who adhere to the principle of “If you can’t beat them, join them,” may end up participating in the BRI. We should look forward to the BRI entering the still-developing regions of developed countries, such as the American Midwest, and attracting US participation through cooperation between Chinese provinces and American states. BRI’s focus on infrastructure investment in developing countries can open doors for US exports and create many job opportunities.

Many observers have mistaken the BRI as a counter to the US Indo-Pacific Strategy because they follow a Cold War mentality. The BRI does not limit joint construction only to the countries along the Silk Road route; it also includes other relevant countries. Projects might be located in countries along the route, but the standards, rules, funds, technology, and talent are global. US companies, American citizens, and the US dollar have already participated in BRI construction in large numbers, while the Asian Infrastructure Investment Bank (AIIB) uses US dollars. The United States is thus a BRI-related country and a de facto participant. Due to its international status and commitments, the United States functions as a neighbor of all countries in the world. China’s wisdom means it will not and cannot exclude the United States. The BRI is China’s overall strategy based on openness—promoting the transformation of the prevailing economic development model to encourage aspiring new global markets to achieve globalization, from partial globalization to inclusive globalization. This will bring new opportunities to the United States.

The BRI emphasizes enterprises as the mainstay, along with market operations, government services, and adherence to international standards. So why do Westerners feel that the BRI consists solely of Chinese government projects? This is due to the national conditions of the countries along the initial route of the BRI and the specificity of the infrastructure construction itself. Among the 65 countries along the BRI’s six major economic corridors, eight of them are least-developed countries, sixteen are not WTO members, and the Human Development Index of 24 of them are below the world average. How can high-standard market principles like those advocated by the EU be applied to all? That would be like a race between a child and a professional runner—in this light, such demands seem divorced from reality.

China maintains that development is the key to solving all problems. Rules are of course important, but they should go through a process of gradual formation and continuous maturation. The state-guided economic development model explored by China’s market reforms provides a complement to the development shortages of countries along the BRI. The initial boon is to bring infrastructure construction to these nations. By “taking the eggs and not killing the chickens,” their ability to develop independently will be enhanced. At the same time, the BRI will help cultivate new markets. China’s reform and opening-up was piloted first in coastal areas and then later in inland areas so that cities that could serve as economic hubs to drive the reform and opening-up of China as a whole. Now, to get rid of poverty altogether, the BRI wants to grow the African market through building interconnected infrastructure (ports, cities, railways, roads, trade routes, etc.) so that Africa can gain endogenous development momentum, form economic development zones, and realize industrialization and agricultural modernization. Relying solely on the market is like throwing a child into the sea—we can all imagine the result. Through development zones, China prefers letting children learn to swim in a pool before jumping into the sea. This is the BRI way.

The West believes that China has adopted the BRI to export the Chinese model—this is a big misunderstanding. The Chinese model can also be called the Chinese development model. It consists of a combination of problem-oriented and goal-oriented focuses, and its core is to have an effective government plus an efficient market, thus using both the invisible hand and the visible hand to create and cultivate the market. In the end, the market plays the decisive role. This provides a new choice for countries that have not fully developed their market economy and creates new options to solve issues that the West’s preferred free market model cannot or will not solve, such as market failures, dislocations, and distortions. For example, you must first build roads before you get rich. However, developing countries have no funds to build roads and are unable to get financing from the international market, which means they cannot achieve industrialization. It is a vicious circle. To achieve a win-win outcome, China provides financing for development through asset-based mortgages and the construction of development zones, and helps with road-building, while Chinese enterprises set up long-term operations in these countries. This is the common practice of the BRI. If market rules are so effective, why do 1.1 billion people in the world lack electricity? Since reform and opening-up, China has lifted 700 million people out of poverty, representing over 70% of the contribution to the UN Millennium Development goals for global poverty alleviation, undeniably proving that the Chinese program is effective. Getting rid of poverty, becoming better off, and eliminating the gap between rich and poor in coastal and inland areas alike, as well as achieving the 2030 UN Sustainable Development Goals—these are the BRI’s priorities.

The BRI was only proposed less than six years ago. In the early stages, China took on more responsibility. Because state-owned enterprises have advantages in infrastructure and there was a lack of strong participation by Western companies, there was some understandable anxiety. Now China is doing a good job getting infrastructure ready, building development zones, and attracting foreign capital with modernized infrastructure. Western private capital and private enterprises must come together to jointly develop the BRI market. China has never put forward such a grand initiative before, so we should expect the West to harbor some doubts. However, we hope people can learn from the example of the US government’s opposition to the AIIB, so that suspicion of China’s intentions, capabilities, and practices does not affect opportunities for cooperation.

The BRI is a great model of innovation for mankind, overcoming traditional innovation traps: the innovations of American-style labor-saving and European-style resource-saving have destroyed the comparative advantages of the Global South in low-cost manufacturing, thus forming an innovation trap. At the same time, beyond this innovation paradox—that is, innovation in the name of money—the rich are getting richer and the poor are getting poorer. There is growth but no employment, and artificial intelligence may aggravate this trend rather than help. The BRI’s focus on infrastructure connectivity can help guide the United States to invest in the real economy and not continue to create financial bubbles. The BRI promotes inclusive innovation and transcends the traditional game of great power competition, aiming to build a human community with a shared future and to create a new human civilization.

China-US cooperation in building the BRI has also transcended the focus on big business, and instead is related to the overall trend toward building a more inclusive international system with more inclusive globalization. The original system, which consisted mainly of the United States providing security and financial public goods, has not adapted to changes in the world political and economic structure. Cooperating with China to build the BRI will transform capital-oriented globalization (of capital, by capital, for capital) driven by neoliberalism, into development-oriented globalization (of the people, by the people, for the people), letting investment return to the real economy instead of making more and more financial bubbles. The hope of achieving globalization that is open, tolerant, inclusive, balanced, and win-win thus provides a response to populist challenges.

The BRI is the way forward, and only by participating can one influence its course. The United States must not miss this chance to shape the future.

Belt and RoadGlobal GovernanceGlobalization
printTweet
You might also like
Back to Top
CHINA US Focus 2022 China-United States Exchange Foundation. All rights reserved.