Geopolitical and Geoeconomic Rebalancing in 2018 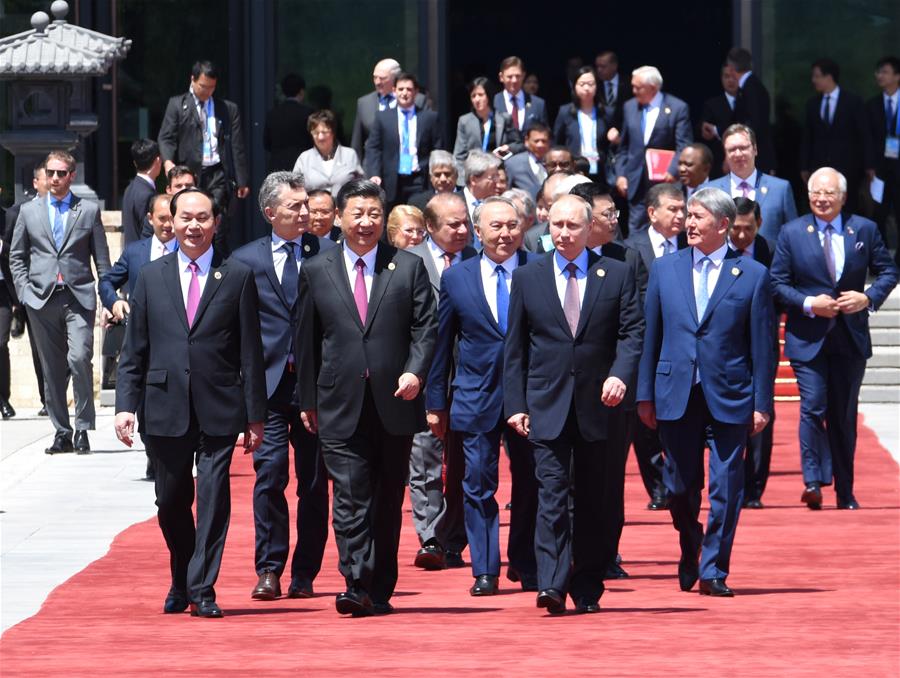 Chinese President Xi Jinping, foreign delegation heads and guests walk out of the Yanqi Lake International Convention Center after the first session of the Leaders' Roundtable Summit at the Belt and Road Forum (BRF) for International Cooperation, in Beijing, capital of China, May 15, 2017. (Xinhua/Rao Aimin)

In the discussion of global disorder and the fate of the West, many political and economic experts and pundits are focusing on how to rebalance geopolitics and geo-economics in 2018. Why is that?

The geopolitical and geoeconomic imbalance seems to have manifested at the national, regional, and global levels, clearly indicating, as Martin Wolf recently commented, “an unraveling of the US-created, post-second world war liberal order into deglobalization and conflict”.

American behavior both domestically and internationally since Trump took office almost a year ago provides an example of a major power’s internal struggle between liberals and anti-liberals as well as between globalists and anti-globalists. The distrust and anger towards liberal democracy has accumulated in the last few decades when economic changes in rich nations pitted from the winners of globalization against their fellow citizens who were left behind by it.

The unfair distribution of wealth that created ever deeper divisions between rich and poor is so commonplace nowadays that it tends to be either ignored or papered over with superficial words and half-hearted actions. Therefore the core rivalry between capital and labor in many capitalist societies is much more pronounced than ever before.

This has been called “the imbalance between market efficiency and social justice” with the latter often sacrificed in favor of market fundamentalism. Capital is the master of the world! When the market tilts too much in one direction, revolution of a kind is not far away. What happened in the 1930s was a painful lesson that must not be forgotten. History will not repeat itself, but similar things do happen if its lessons are not learned.

Of course, the US is not alone in its slide into this quagmire. The UK, Germany, Poland, Hungary, and many other European countries are sliding too. America’s Donald Trump and France’s Emmanuel Macron stand on opposite sides on globalization in the West.

What has been going on in these countries reflects the on-going battles of ideology of our times, leading them into the political and economic institutional crises periodically seen in the history of capitalism.

It is worth noting that what has taken place in these countries has been elevated to regional and global levels, causing a paradigm shift in world order.

First, it is impacting international institutions, especially in global economic governance. On the one hand the US has abandoned the TPP and continues to undermine the WTO while opting for better bilateral and multilateral trade and investment deals for America itself through “America First”  style renegotiation or coercion. On the other hand, the EU, Japan, Canada, and a few other Western countries are closing their ranks to form a united front partly against the US position, but mostly against the China’s “abusive trade policies.” As a result, global economic governance institutions like the WTO, the IMF, the World Bank, and NAFTA are under various degrees of stress from this tug of war.

The real worry from the West’s point of view, as aptly enunciated by Larry Summers, are China’s actions in regional and global institution-building as exemplified by the “Belt & Road Initiative” and the establishment of the AIIB as an alternative source for infrastructure investments to the World Bank and the Asia Development Bank. This warped view of China’s contribution to global economic governance is harmful to the system and will mislead other countries into a zero-sum game.

Security and the economy are the two key areas of global governance. Zero-sum game thinking on these issues should be avoided at all costs. Instead there should be collective and cooperative institutional arrangements that treat participants as equal members of the international community with shared interests and shared destiny. The recently published US National Security Strategy that labeled Russia and China America’s strategic competitors is a reflection of zero-sum game thinking. If global economic governance is done in such a fashion, there would have to be “winners” and “losers” and no possibility of win-win outcomes.

In other words, a rebalance in geopolitics and geoeconomics in 2018 and onwards may take different forms.

One is the “Thucydides Trap” the US and China would fall into if the two countries do not handle their bilateral relationship and global governance carefully. Harvard Professor Graham Allison’s new book “Destined For War—Can America and China Escape the Thucydides Trap?” should be read in this context. Countries must avoid such a disastrous path of confrontation and take cooperation as the only viable option both bilaterally and globally to decrease the uncertainty and instability now permeating international relations. Major powers have a special responsibility to join hands and contribute to institution-building.

The other form is global governance improvement. Part of the structure of global governance under Pax Americana may endure, but there is a need for reform and change to suit the changing political and economic landscape. A governance system must be created to suit the US and China, as well as the rest of the world. It is quite strange that after the 15 years “grace period” since China joined the WTO, the US and the EU still refuse to recognize China as a “market economy” as originally promised.

“The Belt & Road Initiative” proposed by President Xi Jinping in 2013 and welcomed now by nearly 100 countries and regional organizations is an innovative and cooperative blueprint for better global governance through greater connectivity in policy, infrastructure, trade, finance and people-to-people exchanges. There is no reason to obstruct and oppose such an idea that promotes common development and common prosperity.

In sum, global disorder is not normal and should be addressed quickly and collectively. The world is certainly not doomed to confrontation. It is in the hands of international community to come up with viable solutions.

Global GovernanceGeoeconomicsGeopolitics
printTweet
You might also like
Back to Top
CHINA US Focus 2018 China-United States Exchange Foundation. All rights reserved. Disclaimer