Greening the Belt and Road for Sustainable Development

On April 27, Beijing wrapped up the third and final day of its Second Belt and Road Forum for International Cooperation. The event attracted 37 world leaders, as well as representatives from 150 countries. While the event itself had complaints of poor planning and an inadequate number of agenda items to fill the time, there were several significant points of interest that resulted from the forum. An area of particular interest, which has taken on an increasingly important role within the concept of the Belt and Road Initiative (BRI) is the idea of the “Green BRI.” In his remarks at the forum’s opening, United Nations Secretary General António Guterres focused heavily on the green and sustainability aspects of the initiative. 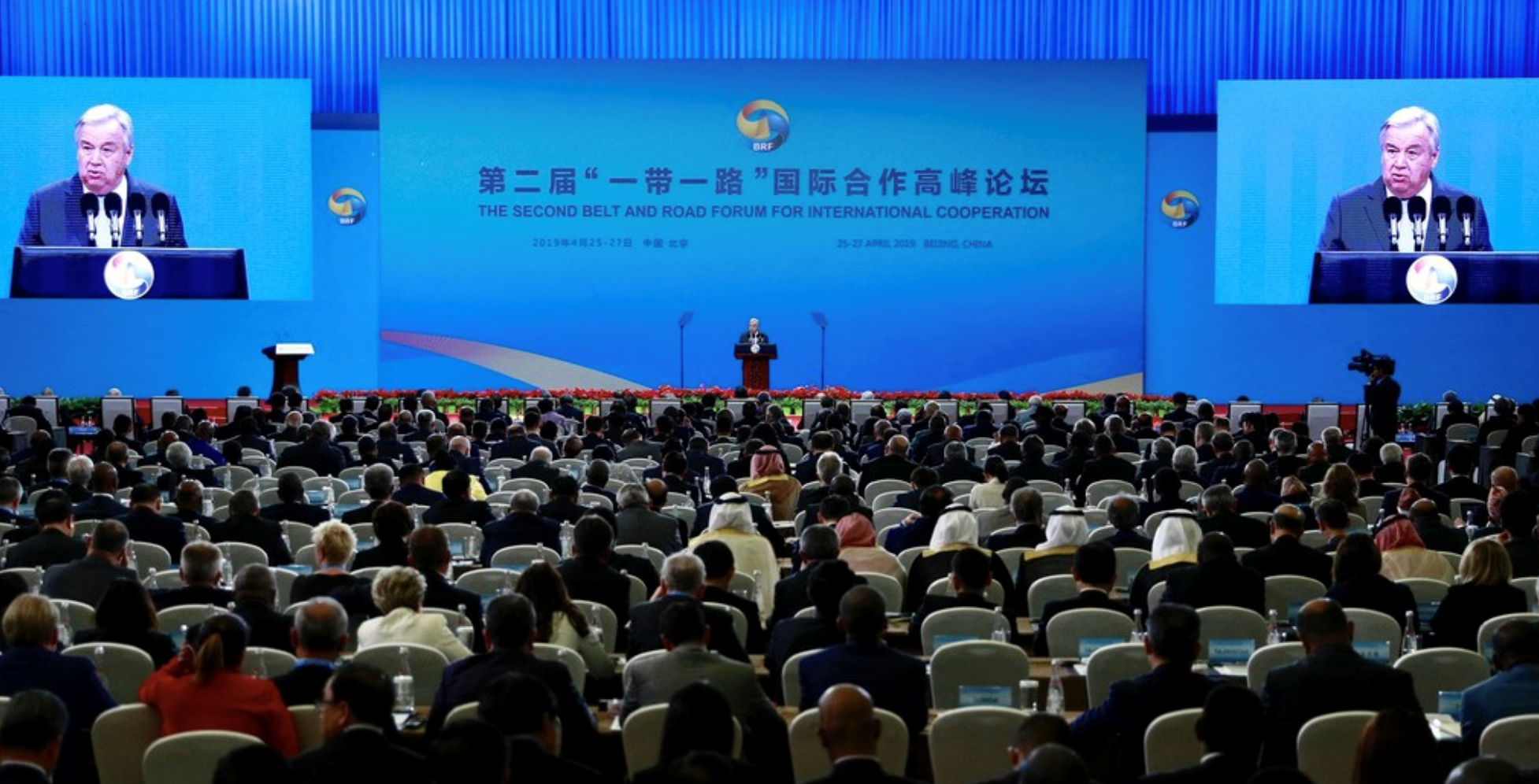 In the lead-up to the event, the Natural Resources Defense Council (NDRC), an environmental advocacy group with offices in Beijing, was also optimistic about the potential for BRI projects in boosting sustainable development and renewable energy. As the NDRC notes in its analysis, however, there are a number of hurdles that China must overcome to actually achieve the goal of a green BRI. The most criticized environmental issue is that China has continued to invest in coal power generation in BRI countries, despite cutting back on domestic coal usage. In January, the Institute for Energy Economics and Financial Analysis (IEEFA) reported that China’s offers and confirmed overseas funding for coal plants currently under development worldwide constituted more than a quarter of the global total. 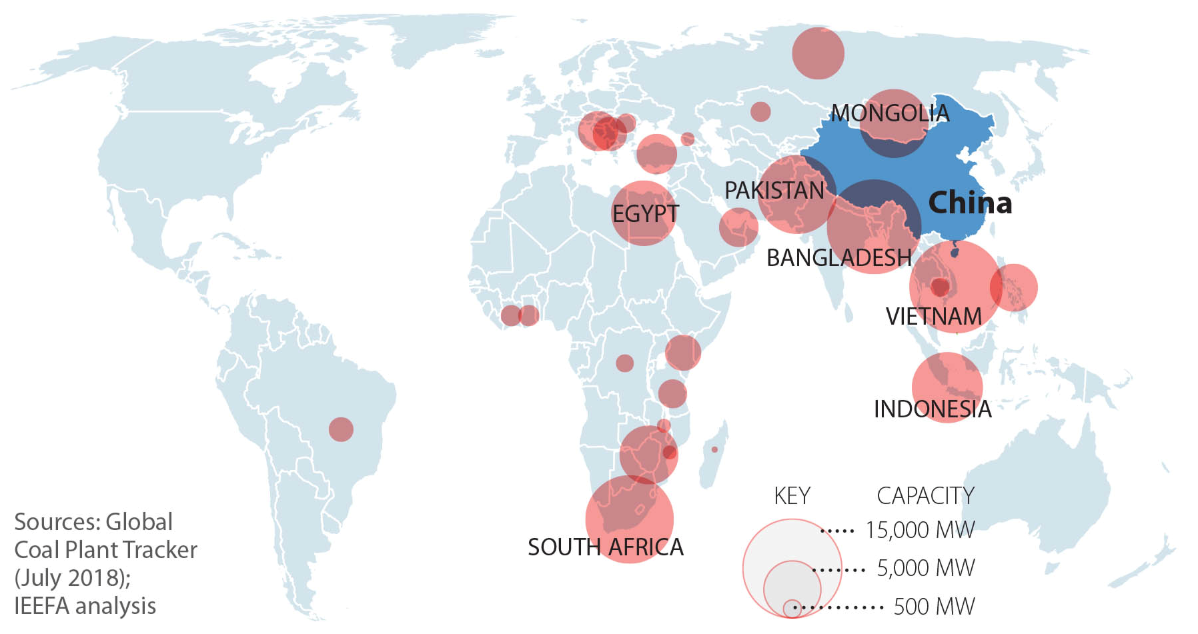 Chinese-financed (committed and proposed) coal-fired energy production in 23 countries worldwide, many of which are BRI countries. Source: IEEFA.org.

Continuing to invest in coal as a part of the BRI is a risky development strategy for both economic and environmental reasons. In economic terms, coal power investment carries a high risk of stranded assets. As the price for renewable energy, such as wind and solar, continues to drop, it will become increasingly unfeasible to rely on coal power from newly constructed Chinese plants. By one estimate, as soon as 2021, the construction of onshore windfarms could be cheaper to build than the current operation costs for coal-powered plants. Additionally, if the least developed BRI countries that receive Chinese financing for coal power were to adopt the same carbon resource exploitation model that served as the driver in China’s development, the results would be environmentally disastrous.

Coal, however, is not the only pressing environmental issue impeding the “greening” of the BRI. Other megaprojects, such as dams and high-speed rails are also major stumbling blocks to creating truly environmentally conscious and sustainable development in the global initiative. While hydropower is touted by some as a better alternative to fossil fuel energy production, its greatest drawback is that the dams required for power generation inevitably have a catastrophic effect on river ecosystems, with frequent negative impacts to downstream communities. China has already greatly impacted the Mekong River (known as the Lancang in China) through a series of seven dams it constructed domestically on the river. Chinese BRI investment has wreaked further havoc on the river’s ecosystem and locals’ livelihoods through the construction of Cambodia’s largest dam, the Lower Sesan 2. Forty one other Chinese-funded dams throughout the rest of Southeast Asia pose similar issues.

Further, even as Myanmar State Counselor Aung San Suu Kyi signed three bilateral cooperation agreements with China during the Second Belt and Road Forum, the future of one of the nation’s most important Chinese-funded projects, the Myitsone dam project, becomes more and more uncertain.  Locals in the planned area of the dam, fully aware of its severe environmental issues, have fiercely protested the dam. The result is that now the Myanmar government must risk losing face to protect its citizens from this BRI investment or, if the project goes forward, it risks disruption of the project and destruction of the local environment. In Laos, via a BRI-supported high-speed rail project, there have been similar environmental and social concerns. The Chinese-financed 414-kilometer-long high-speed rail meant to connect the capital of Vientiane with the Laos-China border can of course be viewed as a national advancement. In the process, however, it has ripped through the Laotian landscape and displaced over 4,000 Laotian families.

Aside from energy production and construction, there are a number of ecological issues that arise as byproducts of BRI projects. One issue highlighted in a recent scientific journal article is the potential for increases in the spread of invasive species via the increases in movement and connection that the BRI promotes. Deforestation has also been cited as an area of concern, with such dramatic and widespread expansion of construction. Via strengthened BRI trade cooperation, issues like the monoculture resulting from the dramatic increase in Thai durian production for the Chinese market have also emerged. The impacts of BRI-induced increases in the amount of durian being shipped to China will likely hit harder as time goes on, when typical issues of monoculture-based agricultural practices, such as a lack of plant resilience and changes in soil composition, become more prominent. If other agricultural systems are shaped in this same way by the BRI, these practices will constitute a trend that puts biodiversity in jeopardy.

Currently, the environmental impact of the BRI is difficult to assess; coal emissions can be calculated, and environmental harm inflicted by dams can be predicted, but the fact is that a network of infrastructure projects to the scale of the Belt and Road Initiative has never before been attempted. The World Bank has highlighted that the changes in population settlement locations could shift because of newly constructed BRI projects, which in turn could potentially inflict even greater environmental harm.

Lack of ability to predict the full environmental impact of the BRI makes it even more critical that Chinese authorities take full advantage of every opportunity to consciously build a greener Belt and Road. The report by the Intergovernmental Panel on Climate Change (IPCC) released last October emphasized the urgency with which humankind must undertake dramatic change to reconfigure our current energy framework if we are to maintain the current conditions of our planet. As António Guterres emphasized in his speech, 75 percent of the infrastructure that the world needs by 2050 has yet to be built. If China is going to take on such a prominent role in developing these needed projects through the Belt and Road Initiative, it has a moral imperative to make good on its promises for a Green Belt and Road.