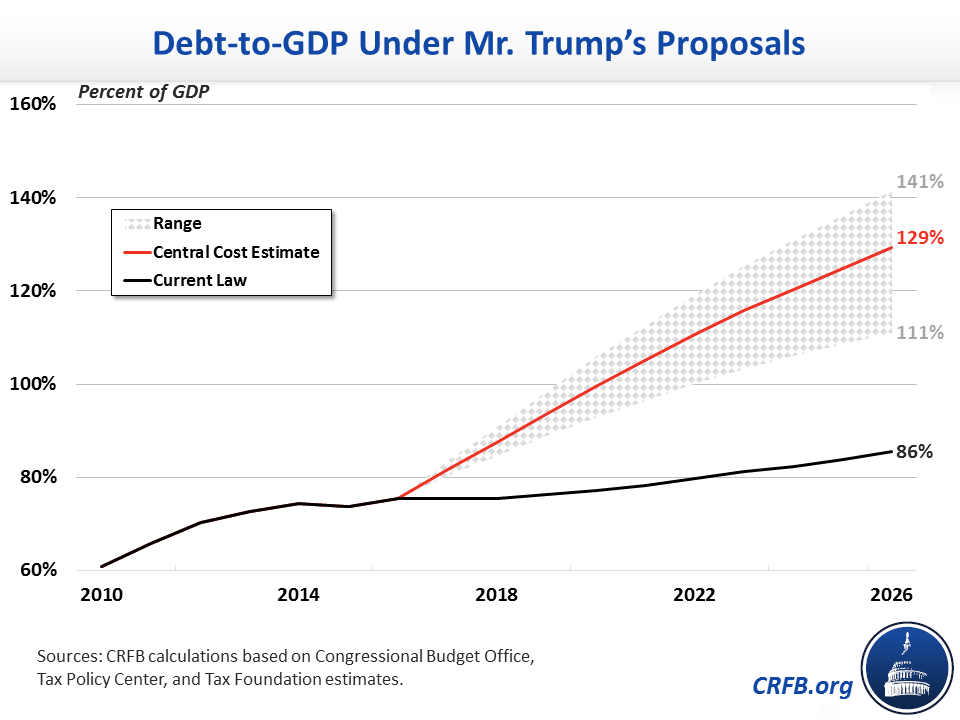 The Committee for a Responsible Federal Budget(CRFB) estimate his economic policies will grow the national debt to $36 trillion by 2026, which will equate to 129 percent of GDP. (Photo: investopedia)

But President Donald Trump's policies aren’t driving this economic momentum. In the second quarter of this year, personal consumption expenditures increased 3.3%, private domestic investment increased 3.6%. These are the main contributors to the quarter’s economic boom. It may be fair to say the US economy is driven by consumption and investment - endogenous growth factors.

In the first several months of Trump’s administration, encouraged by his big promises during the election campaign like his tax reform plan, trillion dollar infrastructure construction initiative, and relaxation of financial controls, investors got optimistic that Trump would boost the economy. They expected huge investment and fewer government controls.

But no substantial promises have been realized  Instead, Trump has been obsessed with his domestic policy agendas, creating social chaos on issues such as Deferred Action for Childhood Arrivals, repealing the Affordable Care Act, and issuing a travel ban on Muslims.

Trump is lucky that he got a good economy handed to him by his predecessor Barack Obama, but now that it’s his turn to run the relay race, he has to depend on himself. Now it seems that risk is accumulating. If Trump and his administration can’t enact some important and meaningful economic policies, the endogenous growth factors could lose steam, and the US economic boom would come to an end.

First, the chaos and the postponing of the economic agenda are letting investors down. Frustration is eroding investors’ confidence in Trump’s ability. Investors’ attitude on Trump’s economic policies is changing from expecting to pleading. The newest poll indicates half of Americans think Trump is reforming the tax code to favor the wealthy. “Trump fever” could easily cool when market expectations change, even though default levels are low, and economic growth has been picking up.

Second, bubbles are swelling in the financial market. The years-long quantitative easing operations of the Federal Reserve have depressed returns across bond and equity markets. Investors flock to the high-risk markets to pursue high returns.

The bubble in leveraged loans is one of the signs of markets overheating. Hedge funds are embracing an esoteric credit product widely blamed for exacerbating the financial crisis a decade ago. A report in the Financial Times in August said that the market for “bespoke tranches” — bundles of credit default swaps that are tied to the risk of corporate defaults — has more than doubled in the first seven months of 2017.  Traders in this opaque, over-the-counter market estimate there is an issuance of $20 billion to $30 billion this year, compared to $15 billion in the whole of 2016 and $10 billion in 2015.

Lending to the most highly indebted companies in the US is also surging. According to S&P’s Global Market Intelligence’s LCD unit, volume for these leveraged loans was up 53% in the past 9 months, putting it on track to surpass the 2007 one-year record of $534 billion. In the high-yield bond market, another area where riskier companies look for funds, the demand of extra premium investors to hold these securities over safe US Treasury securities has declined around half a percentage point this year to levels not seen since 2007, according to Bloomberg Barclays bond indices.

Third, according to the economic cycle theory, the US economy might not be far from the next downturn. The last crisis produced more investment opportunities and lured investors to expand their production. But more investment and production will lead to oversupply. The mismatch will eventually lead to an adjustment of production and supply. The shock of such adjustment causes a crisis.

What’s more, an economic cycle’s expansion stage has its tenure. As of September 2017, US economy is in the expansion phase. It has been in this phase since June 2009. That's 99 months. Historically, expansion phases last 60 months or so. When an expansion heads toward its end, inflation will go up. We haven’t seen inflation yet, but we have seen asset bubbles.

Fourth, according to the Bank for International Settlements’ latest data, the rapidly accumulating financial risk isn’t only in the US. It’s a global phenomenon. The outstanding stock of securities issued by banks grew at its fastest pace in six years in the first half of 2017, rising to a whopping $22.7 trillion. The outstanding government debt of emerging market economies since 2007 jumped to $11.7 trillion at the end of 2016, while government debt rose by 10% to 51% of GDP over the same period, which made some countries vulnerable to a rise in inflation followed by a rise in short and long-term interest rates. The possibility of a debt crisis happening in other countries is increasing. According to the US Treasury Department’s International Capital data, US banks’ total claims on foreign residents amounted to $2.8 trillion at the end of July. When a debt crisis breaks in other countries, it could drag down the US economy.

The first thing that punctures the economic bubble may be the stock market. To counter the financial crisis, the Fed launched a large-scale stimulus plan, injecting a huge amount of liquidity into the market. The result is that demand for global assets, including stocks, real estate, and bonds increased. With the central bank’s “help”, the bull markets in U.S. stocks have lasted 96 months, the S&P 500 Index is valued at 24 times earnings now, while historically, the average multiple is closer to 15.  Now the Fed is beginning to shrink its $4.5 trillion balance sheet in October and intends to continue raising federal fund interest rates. When liquidity is neither that strong nor unyielding, it is unavoidable for any asset class to decline in value. The Conference Board's Consumer Confidence’s September poll shows falling confidence that the stock market will go higher. This is a warning signal. A significant asset price decline or adjustment will finally increase unemployment, reduce growth, and even destabilize political processes.

Donald TrumpUS EconomyGDP
printTweet
You might also like
Back to Top
CHINA US Focus 2018 China-United States Exchange Foundation. All rights reserved. Disclaimer