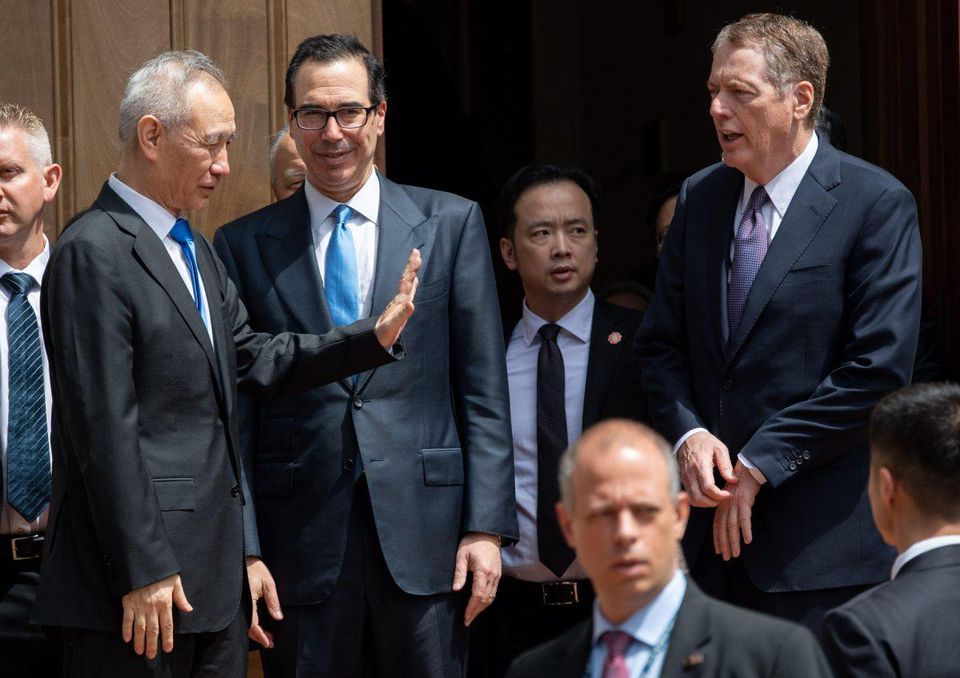 The 11th round of Sino-US trade talks has come and passed without any result. Although the representatives of the two sides did not announce the negotiations had broken down, and they expressed their willingness to continue consultations, it is clear that the optimism that the two countries were nearing an agreement has evaporated. Who is responsible for this failure to achieve hoped-for progress? Such questions are no longer meaningful. Now that the Trump administration has raised tariffs from 10% to 25% on $200 billion of Chinese exports to the United States, we should ask: what impact could this decision have on the US and the Chinese economy.

It is widely expected that these tariffs have thus far added more than one or two billion dollars in fiscal revenue to US government coffers. President Trump is complacent and self-congratulatory. However, the 10% tariff increase from the previous round seems to have been paid by American companies and consumers! US importers must see their profits eroded by tariffs if they do not directly pass these costs onto US companies downstream. A study by a group of economists from Princeton, Columbia, and the Federal Reserve Bank of New York estimates that US companies have suffered a loss of $1.4 billion due to tariffs, while American consumers have footed the bill for more than $3 billion. Another study by another group of economists from the World Bank and the International Finance Corporation argues that the US-China trade war has cost the American economy $6.4 billion, equivalent to 0.03% of GDP. It seems unwise to let American companies and consumers take such large losses for such little increase in fiscal revenue.

Some American strategists consider that the Trump administration’s trade war is intended to force foreign companies to leave China, thus decoupling the US and other countries from China. They believe that China’s rapid development and transformation into the “world’s factory” have been thanks to investment from foreign companies. However, many foreign companies' production in China is directed at the US and European markets. If this chain is broken, foreign companies have no choice but to move out of China. If China loses its position in the global value chain, it will not be able to continue its breakneck pace of development. In order to eliminate China's capacity for development, these strategists argue that the United States should not hesitate to "bear some bitterness" and temporary grievances from American companies. From this perspective of American grand strategy, it is worthwhile to lose a little profit in the short term.

Although these ideas have a certain logic, it lacks precision and nuance. For example, the strategists’ argument does not take account of the fact that trade between China and the United States is composed to a large extent of semi-finished products—Chinese companies import semiconductor components such as chips from the US, assemble them into mobile phones, computers, and even large-scale mechanical equipment and then sell them to China and the international market. The reverse is also true. Some American companies import many parts from China and assemble them into industrial products for sale. If the United States increases tariffs, China is bound to take retaliatory measures, and Chinese companies will reduce the imports of commonly used semiconductor components from the United States, while US companies will also reduce parts imported from China. This trend will force Chinese companies to invest in R&D and increase production to replace US imports. Given that China’s industrial production consists of a complete supply chain, increasing investment is beneficial to the Chinese economy overall. But it is not good news for American companies, because the US industrial chain is “incomplete,” meaning American companies have to import semi-finished products from other countries. As there are not so many countries that can replace China's complex industrial supporting mechanisms, the costs borne by American companies will only rise rapidly, and supply will not be guaranteed. In the current trade war, the US government restricts American companies from supplying semiconductor components to Chinese companies. But China is the largest semiconductor market. As soon as this news came out, the share prices of US semiconductor companies fell sharply. If American technology companies cannot export to China, they would only create next competitors there, while losing access to a huge market.

Since 2018, US exports to China have fallen sharply, while China’s exports to the United States have set a historical record. This shows that US companies have some rigidity in importing from China. On the contrary, China's imports of natural gas, oil, and soybeans from the United States are highly substitutable. Therefore, the US trade war with China is counterproductive. If US companies export less, there will be less production, and economic growth will fall. Conversely, if Chinese companies do not have access to technology products imported from the United States, they must increase investment and expand production to replace US imports. Thus, China’s economy will grow either way.

According to international trade theory long-established since the 19th century, the importing countries will get the biggest benefits from international trade. However, President Trump does not believe in that theory. Rather, he thinks that China has been taking advantage of trade in a stealthy manner, as China currently has a trade surplus with the US. He believes that his own notions of trade are more reliable than what you find in an economics textbook. In fact, the US economy has maintained low inflation and stable economic growth by importing cheap goods from China. If the trade war interrupts this balance, and the United States is really "decoupled" from China, the United States will lose the "low inflation and high growth" situation that it has enjoyed for many years. In fact, China’s exports to the United States account for only 18% of China’s total exports. In 2018, China’s total exports were $2.48 trillion. If the Trump administration imposes a 25% tariff on $200 billion Chinese exports, it will only impose tariffs on 1/10 of China’s exports. Moreover, the proportion of exports in China's total economic output is only 20%. Thus, even a reduction in Chinese exports would not have so serious an impact on the Chinese economy overall. The Trump administration’s trade representative, Robert Lighthizer, was a key person of interest in the US-Japan trade war in the 1980s. He is accustomed to using the same techniques that he once employed in dealing with Japan then to deal now with China. But of course China is different from Japan. The structure of China's exports to the United States is completely different from that of Japan’s, and the sources of the respective trade surpluses are completely different as well. Applying the logic of the US-Japan trade war can only cause enormous damage to the US economy, as most of China's exports to the United States are intermediate products, which are different from the finished products that Japan exported to the United States. Without the cheap goods imported from China, downstream American companies will suffer enormously. Such is the inevitable logic of the Trump administration’s decision to double down on its harsh strategy of trade war and decoupling.