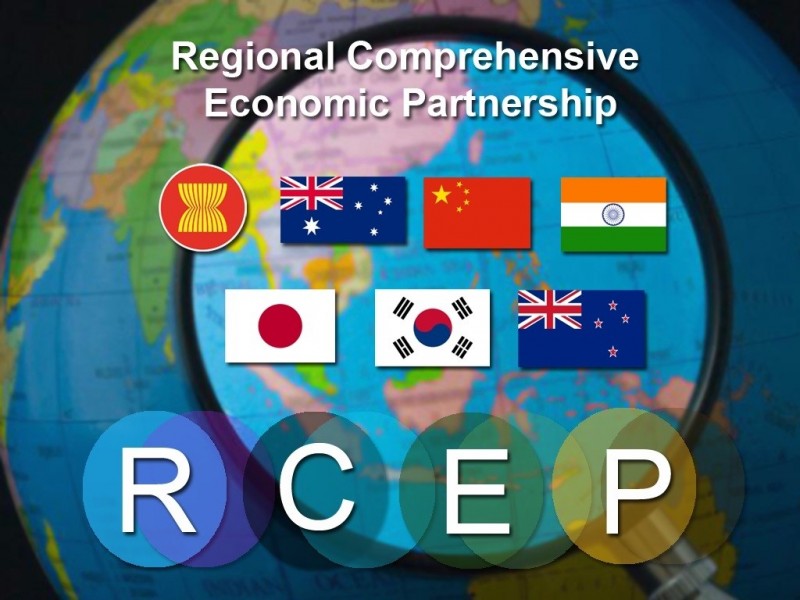 In the world today, protectionism runs rampant, the global economy is slowing down, trade frictions threaten the economy and the multilateral free trade system is at a crossroads. The Regional Comprehensive Economic Partnership, or RCEP — a major mechanism designed to cope with the complicated “spaghetti bowl” phenomenon in the Asia-Pacific region — is an important step in promoting regional economic integration and will naturally have an impact on the economic development not only of the Asia-Pacific but of the world as whole.

After 28 rounds of consultations and 18 rounds of ministerial-level meetings, the 15 RCEP members have wrapped up negotiations in all 20 sections of the agreement text and have held substantial talks about market access. They also pledged to sign the deal next year. However, India has opted to pull out the negotiations. As a mega free trade agreement, RCEP affects countries in both the Northern and Southern Hemispheres, about 3.5 billion people and $23 trillion in GDP. It covers 32.2 percent of global GDP, 29.1 percent of trade worldwide and 32.5 percent of global investment, and it is set to be officially signed after seven years of talks.

With the weakening of the WTO-led multilateral trading system, free trade areas have become the forces that are leading the new round in the process of laying down international economic and trade rules. According to the WTO’s RTA database, 124 regional trade agreements were filed with the WTO from 1948 to 1994. After the Uruguay round of talks in 1995, the number of RTAs soared to more than 400. As of the end of June this year, the number of RTAs in effect stood at 474, including 257 which are actually free trade areas in nature.

The “spaghetti bowl” phenomenon, triggered by intertwined and fragmented rules among the RTAs, has greatly affected the regional economic integration process.

At the beginning, there were already five FTAs within the RCEP region, including ASEAN-Australian-New Zealand, China-Singapore, China-Australia and Japan-Philippines. Among those FTAs, there were overlapping preferential policies. Rules about place of origin, investment and service trade were also different.

Differences in preferential policies make it difficult to integrate the FTAs and have also become a major obstacle in establishing RCEP. Following efforts made in past years, various standards, rules and preferential policies have been gradually integrated, laying a solid foundation for wrapping up negotiations. The early achievements gave all members higher expectations about deepening cooperation in trade and investment in the region.

Because some countries place their own interests above others, trade tensions have escalated and the international multilateral trading system is now threatened by anti-globalization forces. Defense of the free trade system, strengthening the integration of the Asian value chains and promoting regional economic integration, is of landmark significance.

Since the beginning of this century, trade dependency and integration within the Asia-Pacific region have been growing. According to data from a Boao Forum for Asia report — Progress of Asian Economic Integration — the Asian economy’s dependence on Asia had increased to 54.2 percent in 2017 from 50.74 percent in 2016, the highest level since 2004. With the expanding of the China market and the country’s further reforms and opening-up, economies in the region are also becoming more dependent on trade with China.

On the other hand, trade links within the RCEP region have also strengthened. Since the mid-1980s, the growth rate of trade within the region has been double the global average, much faster than the growth rates of the North American Free Trade Agreement area or the European Union. In terms of both imports and exports, total foreign trade by economies within the region has risen remarkably, reaching 60 to 65 percent, thereby becoming the value chain partners with the most dynamic growth potential in the world.

Consequently, once RCEP takes effect as the biggest and most important free trade agreement in the Asia-Pacific region, the Asian regional value chain will become more closely linked through simplification of the rules on place of origin, the reciprocal recognition mechanism and improvements in trade and investment facilitation.

How is close is the RCEP to the level of a high-quality free trade deal? There is still much room for it to upgrade and improve. Compared with recent big free trade agreements, such as the Comprehensive and Progressive Agreement for Trans-Pacific Partnership, the Economic Partnership Agreement and the United States-Mexico-Canada Agreement, the RCEP puts more emphasis on multilateral trade systems with WTO rules at the core. It gives priority to the interests of developing nations and aims to strike a balance between flexibility and high standards.

Generally speaking, talks and topics involving the RCEP have focused on traditional agendas. For instance, the partnership stipulates that tariff exemptions should reach at least 95 percent, much higher than the level promised by WTO members. However, in terms of openness, the RCEP still lags behind the CPTPP.

On the other hand, with the growing demand for improvement in the rules of high-standard international trade, many new topics were included in the text-based negotiations of RCEP, covering 18 new fields, such as commodity and service trading, financial services, telecom services, investment facilitation, intellectual property, e-commerce, competition policies, small and medium-sized enterprises, government procurement, economic and technological cooperation, dispute settlement, rules on places of origin, tariff procedures and trade facilitation.

In the field of investment, in particular, the RCEP includes investment access negotiations based on the negative list mechanism, reflecting its effort to stay on par with high-standard FTAs. It will be conducive in removing regional market barriers and greatly improving business environments. And it will be constructive in promoting efficient free flows within the region.

Asia-PacificRCEP
printTweet
You might also like
Back to Top
CHINA US Focus 2021 China-United States Exchange Foundation. All rights reserved.