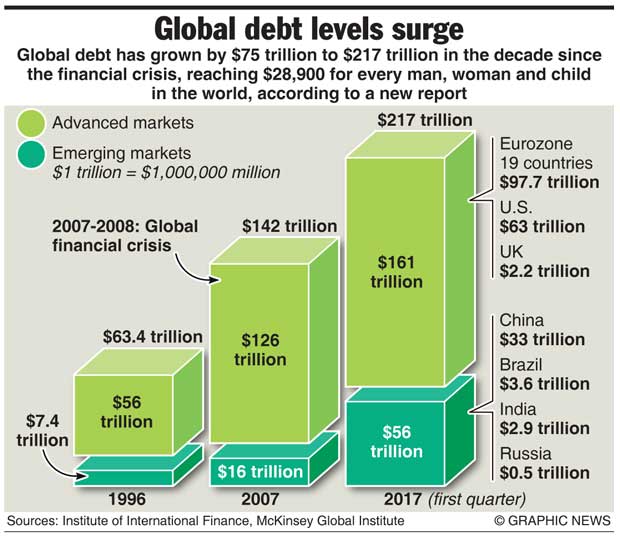 The Institute of International Finance (IIF) reported that, within the first quarter of 2017, world debt jumped by $500 billion to 217 trillion dollars, reaching 327% of world GDP. World debt is now 50 trillion dollars more than it was ten years ago. Debt soared not only in developed countries, but also in emerging economies. Although the international financial crisis broke out ten years ago, evidence suggests that a new debt crisis is mounting.

According to the IMF, the public debt level in the US, Japan, and certain European countries has already reached dangerous levels. The scale of all sorts of debt in the US, including federal government debt, corporate debt, household debt, and private debt is nearing an all-time high. The IIF report pointed out that the overall profit of US enterprises has fallen since 2014 but US enterprises still crazily issue bonds. The ratio of net debts to profits is 1:1.4, twice as high as it was during the 2007 subprime bubble period. However, most of the funds raised through issuing bonds were used to pay dividends, buy back shares and back up mergers instead of being used for capital investment.

Similarly, the debt level of emerging economies has also surged. On the one hand, since 2008, aggregate world demand has dropped, obviously reducing the demand for exports from developing countries. Consequently, the trade surpluses of the export-oriented emerging market economies greatly declined, narrowing the external liquidity gained by these economies from trade.

On the other hand, the US interest rate hikes intensified the foreign debt burden of emerging markets, resulting in the sharp increase of short-term debt payment risk. On the basis of the data collected by Bloomberg since 1999, US dollar-denominated enterprise bills issued by emerging markets have climbed to $160 billion this year, more than doubling from the amount issued over the same period last year, representing the highest bond issue rate in history. IIF statistics also show that emerging markets will face the maturity date of more than $1.9 trillion in dollar bonds by the end of this year; the US dollar-denominated debt accounts for 1/5 of total debt.

The risk of a new debt crisis will not only come from the rapid increase of global debt, but from the US Fed’s interest rate hikes, default risk, and uncertainty at economic growth prospects, which will further weaken the global debt market. Since the 2008 financial crisis, governments have rushed to ease their monetary policy by implementing ultra low and even negative interest rates. This did not bring about substantial economic growth, but instead reduced potential economic growth, resulting in a substantial rise in debt. The high levels of debt have constrained investments and further weakened labor productivity growth. This weak growth has made the debt burden unsustainable, resulting in a vicious cycle.

In terms of fiscal stimulus, over the past two years fiscal expansion in developed countries slowed somewhat. However, the large-scale tax cuts and trillion dollar infrastructure investment promised by the Trump administration increases the risk of soaring US federal government debt and fiscal deficits.

Furthermore, Trump has recently hinted that he hopes to cancel the restraint of a debt ceiling in the next fiscal debt ceiling negotiation in December so the US government can borrow without limit. If this becomes a reality, US fiscal policy will lose an important check and the US government will recklessly issue money and wind up deep in debt.

Due to the reduced supply of dollar assets, the global restructuring of investment and savings, and the current account rebalance between surplus countries and deficit countries, global real interest rates and debt yields have begun to rebound from record low levels. Thus it will certainly increase borrowing costs and debt defaults, impeding sustainable global economic growth.

Compared with the European debt crisis, the scale of this round of debts is larger and accumulates faster. Not only does the total amount of debt keep growing, the pressure of short-term debt payment continues to increase. Therefore policymakers in all countries should make the stabilization of debt growth a priority. They should reduce the use of unusual monetary policies to stimulate the economy, speed up economic and financial reforms, and adjust the balance sheets of banks, enterprises, and the government. It is time to comprehensively lower the debt level, enhance total factor productivity and rate of return, and deal with the cumulative effect of existing debts so as to lay a foundation for sustainable global economic growth.

Debt CrisisGlobal EconomyUS Economy
printTweet
You might also like
Back to Top
CHINA US Focus 2018 China-United States Exchange Foundation. All rights reserved. Disclaimer