The G20 and a New Era Global Governance

As G20 Summit approaches, the world is shifting focus to Hangzhou where the meeting will be held, and pins high hopes on this global event. 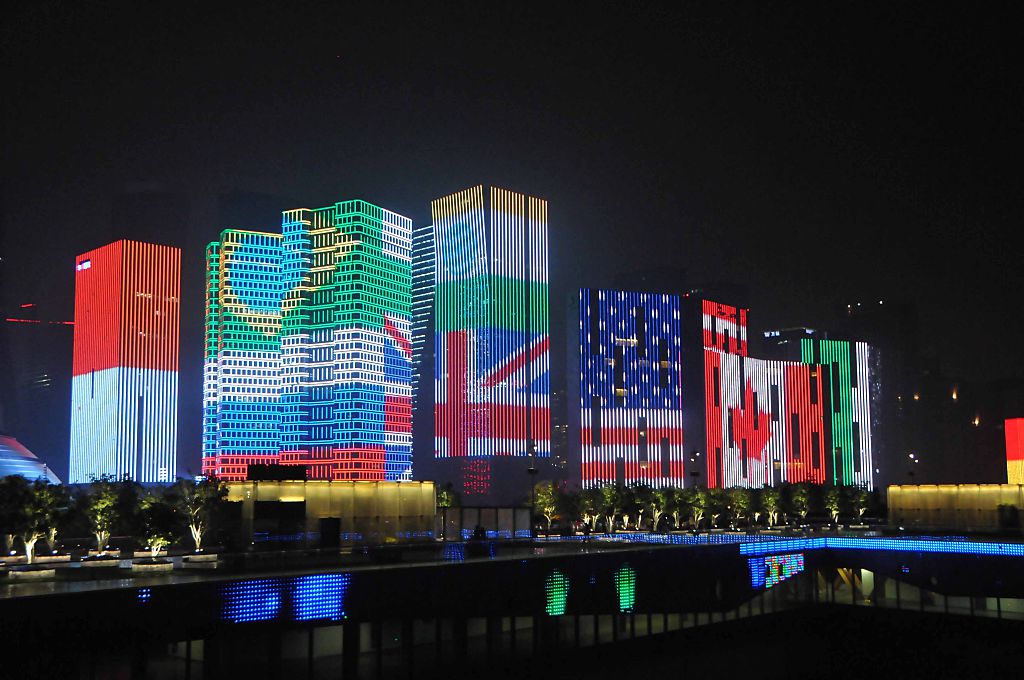 View of Hangzhou skyline at Hangzhou Civic Culture Center displaying flags of G20 members in preparation for the 2016 G20 Hangzhou summit on June 11, 2016, in Hangzhou, Zhejiang Province of China. The summit will be held in Hangzhou on September 4-5 2016, it will be the first time a G20 summit is hosted in China. (Photo by Zhu Yinwei/VCG)

G20 is the prime forum for international economic cooperation. Against the backdrop of a complicated and ever-changing international situation and lackluster economic recovery, could this annual event make a stride in a stable direction in guiding global governance? How will China, the host of this year’s summit and the largest developing nation, play its role as a responsible big country at this event? It is highly hoped that the summit would render satisfactory answers to these questions.

The G20 members have reached consensus on the theme for this year’s summit – the solidarity and partnership spirit. This, in other words, frames the preconditions and foundations for cooperation. Main topics for this year’s summit are also clearly defined: “Innovative, Invigorated, Interconnected and Inclusive”. To be more specific, it means to “transform growth patterns in innovative ways,” “improve global economic and financial governance, improve the global economic and financial reforms, increase the representation and voice of emerging markets and developing countries, and enhance the capacity of the global economy to ward off risks,” “promote global trade and investment to generate growth,” and “promote inclusive and interconnected development, strive to implement the 2030 Agenda for Sustainable Development, eliminate poverty, and achieve common development”. After rounds of meetings and intensive consultations, the G20 countries have achieved consensus on these topics. Hopes are high that the Hangzhou summit will realize its missions and deliver to the expectations. China, as the host, will also strive to contribute “China wisdom” to the success of the summit.

Should G20 play its role in guiding the global governance, it is a prerequisite to know and understand the current times, in which trends change quickly and the global forces are undergoing historic transformation. The G20 was initiated under such an environment; its practices and development in the past decade have proved it was neither merely the expansion of the G7 nor an extension of the BRICS group. Instead, it serves as a dialogue and consultation platform between the developed countries represented by G7 and the developing and emerging economies represented by the five BRICS countries. Therefore, under the G20 framework, all members must give mutual consideration to the core interests of the members, stay united in the shared boat so as to achieve the maximum win-win cooperation. None of the G20 members should elbow others for a bigger or more comfortable space for itself in this shared boat, nor should any member consider the organization as its “home turf” to issue orders to others or shift one’s problems onto others.

Second, it is a must to achieve a consensus on the highest common factor about the economic globalization and other relevant concerns. Economic globalization is the natural trend in the development and progress of society, and is also an irreversible trend. With the development of advanced technologies, particularly information technology, the world has become smaller and is evolving into an interconnected society and a global village. In the interconnected world, physical distance is no longer an issue between the people and between countries, they have all become closely associated with and highly interdependent on one another. The convergence of their common interests is greatly widened, and in many economic fields, a deeply interdependent scenario has emerged. Therefore, economic globalization calls for better and strengthened cooperation, for trade and investment liberalization, for fairer and equal national treatment and reasonable distribution of resources, and more importantly, for the construction of and compliance with common rules. This should neither be avoided nor reversed.

It’s a fact that China and other emerging economies have benefited a lot from economic globalization, but the United States and other developed countries also have benefited. The US used to be a strong advocate for globalization. However, because the US actually cared only about the “barrier-free flows” of its commodities and capital and did not give any consideration to the actual situation and affordability of other countries, what it advocated is actually the American version of “neoliberalism economy”. The so-called “Washington Consensus” is actually the brainchild of the US, which has caused other countries to suffer – not because of economic globalization, but because of the consequences of the US policies. The US presidential candidates blame economic globalization for its poor economic performance and high unemployment rate in the past few years, even pointing their fingers at China for “stealing” jobs from Americans, and tried to resort to trade and investment protectionism. This is obviously neither sensible nor feasible. In guiding global governance, the G20 must, in addition to strive for innovative growth and financial reforms, comprehensively and vigorously promote strong global trade and investment liberalization and facilitation，and let global trade and investment play their role in generating growth. In this regard, China’s Belt and Road Initiative could serve as the catalyst for economic globalization and global governance in the new era. The initiative, which conforms to the trends of the times, strongly advocates for equality and mutual benefits, win-win cooperation, wide consultation, joint contribution and shared benefits, and assistance for disadvantaged groups. It also strives to implement the UN’s 2030 Agenda for Sustainable Development and eliminate poverty.

Third, on the basis of extensive consensus, it is necessary to reform international financial institutions so as to make them fairer, more equitable and more representative. At the same time, it is a must to set common rules for the game, such as non-discriminative and politically non-biased standards for defining a “market economy country”; to work out measures for avoiding competitive currency depreciation; and to set the course for fighting against trade and investment protectionism and for conducting anti-terror and anti-corruption cooperation. The APEC has what is called the “APEC Approach”, which is considered the soul for its survival and development. For G20, it seems that a similar approach is needed to ensure its smooth and efficient operations.

Finally, it is worth noting that China, as the host, will do its best to help steer the development direction for G20, to coordinate the stances of different members and their interests, and work with other members to guide the G20 to develop for a better future of the mankind. This year marks the beginning of China’s 13th Five-Year Plan and also the first year of operation and implementation of the Asian Infrastructure Investment Bank and the Belt and Road Initiative. These will naturally contribute to the success of the G20 Hangzhou summit, and China will also benefit from the G20 summit. The Chinese concepts and wisdom about “win-win cooperation”, “new type of major-country relationship”, “community of common destiny of all mankind” and “new security concept” will surely contribute to the G20 in the building of solidarity and a spirit of partnership spirit.