The Privatization of the US Indo-Pacific Vision

In the recent Shangri-La Dialogue in Singapore, Acting Defense Secretary Patrick Shanahan pledged the United States would no longer "tiptoe" around Chinese behavior in Asia and warned about the new US “toolkit of coercion.”

However, what the Trump administration says “burden sharing” is predicated on the idea that Asian economies should increasingly "buy American" military hardware from Pentagon contractors, even if it would split the region and undermine the promise of the Asian Century.

Project 2049, Armitage and China as a budget ploy

Secretary Shanahan, who got his post only last January, is the public face of the “new” US Indo-Pacific strategy, but not necessarily its architect. The credit should go to Steve Bannon, President Trump’s former chief strategist and the American far-right’s leading spokesman who predicted in 2016 that the United States and China will fight a war within the next 10 years. To ensure the path to war before he was forced out from the White House, Bannon was able to have his candidate, Randall Schriver, appointed as the Pentagon’s top chief for Asia. Now Schriver serves as Assistant Secretary of Defense for Indo-Pacific Security Affairs.

For years, Schriver has been known as a “critic of China and a friend of Taiwan.” In the early 2000s, the military veteran worked on the Bush-Cheney campaign in the Asia policy team, until Deputy Secretary of State Richard Armitage hired him as his chief of staff. Armitage’s distinguished career has been overshadowed by moral lapses - from allegations of heroin dealing in Vietnam and regime change in Iraq in the ‘90s to the Plame Affair and pushing arms sales in Taiwan against US government-designated buys.

When the two launched their Project 2049 Institute in 2008, Armitage became its chairman and his protégé Schriver its president. For a decade, the Institute pushed hard for a tougher diplomatic approach against China and increased military sales to Asian countries, particularly Taiwan. This stance led to President-elect Trump’s controversial call to President Tsai in December.

After the 2018 National Defense Strategy defined China as a “strategic competitor,” Schriver introduced in May the Pentagon's 2019 China Military Power Report, which deemed that China has embarked on a 30-year program to eclipse the United States as the preeminent military power in the Indo-Pacific region. Based on unspecified observations, the Report misunderstood – or purposefully misrepresented - China's stated goal of becoming a world-class military by 2049 as the fulfillment of the neoconservative fear that China sought to overthrow the US in the global arena.

Consummate military veterans were quick to call the bluff. Col. Lawrence Wilkerson, former chief of staff of Secretary of State Colin Powell, called the Report an exercise in “hypocrisy.” “This is all about money,” said Wilkerson. “This is a budget ploy.” Wilkerson also warned that the Trump administration’s combative attitude toward China increases the potential for a seemingly “inevitable” fight.

Nevertheless, the budget ploy means great business to the Pentagon’s contractors, which have thrived during the Trump era. That’s also why Taiwan's national security chief David Lee met White House national security adviser John Bolton in May, marking the first meeting in more than four decades between senior US and Taiwanese security officials.

If Pentagon’s report on China’s military expansion is a hypocrisy and the new Indo-Pacific strategy is all about money, well, let’s follow the money.

In today’s Pentagon, too often does a revolving door stand between the Department of Defense and its contractors. Even Secretary Shanahan is a case in point. Prior to government, he served more than 30 years at Boeing, the largest US military exporter. After Trump selected him to drive the massive rearmament, he was targeted by the Pentagon’s Office of Inspector General in March, due to allegations that he improperly advocated on behalf of Boeing against Lockheed Martin. A month later, he was cleared of the allegations- by the very same Pentagon (the assumption being that the DoD can police itself).

Yet, the debacle is minor relative to the Project 2049 Institute, whose contributors comprise leading US defense contractors (BAE, Lockheed, Northrop), US government agencies (US State Department), quasi-governmental organizations that play a role in hybrid warfare and regime change (Soros's Open Society, National Endowment for Democracy, RAND), foreign government agencies and quasi-independent think-tanks, most of which represent defense hawks in Taiwan and Japan (see Figure 1).

More importantly, when Richard Armitage and Randall Schriver launched the Project 2049 Institute, they did not create a lobbying firm, as many have done, but a consulting company. A lobbyist is constrained by significant disclosure requirements, a consultant is not. The arrangement resulted in an odd parallel structure, which led Schriver – and several of his colleagues - to serve as partner at Armitage International, even as he split half his work time as president of Project 2049. In the Pentagon, Schriver has been issued a nominal ethics waiver, but not with appropriate scope and coverage, as investigative journalists have shown.

Indeed, Project 2049 does not seem to be the independent “nonprofit research organization” it purports to be. Rather, the shrewd arrangements ensure minimal public disclosure and maximum cash flow from private-sector clients (Figure 2). 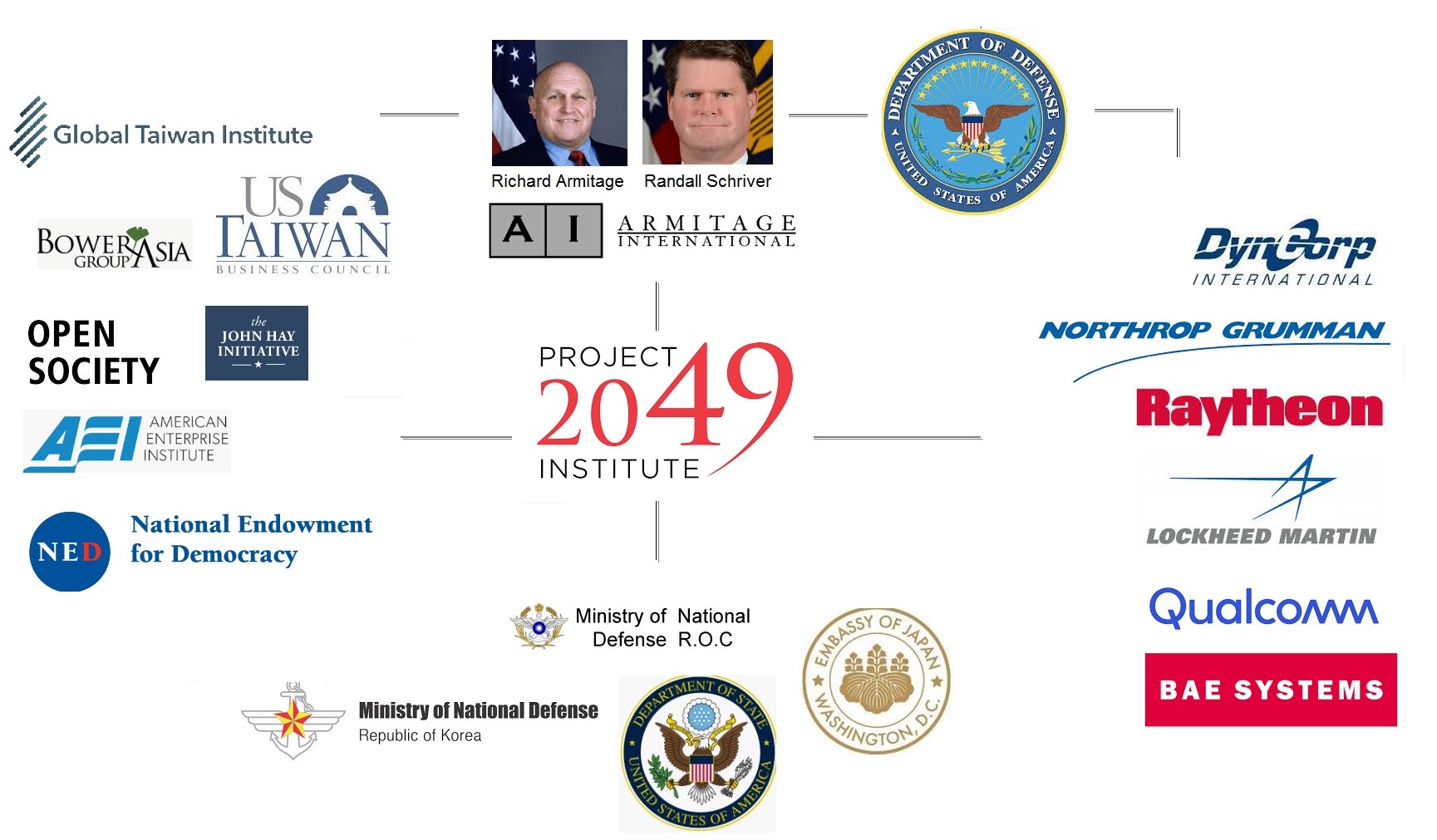 Cashing on the US-Taiwan Nexus

Taiwan has long played a central role to Armitage and Schriver whose ties with the country go back to the early ‘90s. Through Bannon, Schriver gained access to the Trump White House (Armitage supported Hillary Clinton’s 2016 campaign). By summer 2018, Schriver declared Taiwan a partner of US Indo-Pacific strategy. It was an effort to redefine the US One-China policy as de facto Dual-China policy.

Soon thereafter Armitage, Institute Executive Director Mark Stokes and retired Adm. Scott H. Swift, ex-commander of the US Pacific Fleet, led the Project 2049 delegation to the office of Taiwanese President Tsai, who “took the opportunity to thank Armitage and Swift, for their long-standing support for Taiwan.”

This support has operated on many levels. Before Project 2049, Mark Stokes, himself a retired Lieutenant Colonel, served as VP and Taiwan country manager for Raytheon International, a major defense contractor, and has served on the board of Global Taiwan Institute, which has a “passion for closer US-Taiwan ties.”

Before the Pentagon, Schriver himself was on the board of the US-Taiwan Business Council. These ties have a critical role- as the US-Huawei conflict spreads to semiconductors, the Pentagon would prefer to insulate China from Taiwanese capabilities. The Council also hosts annual US-Taiwan defense industry conferences, whose past speakers include funders of Project 2049 and controversial lobbyists, such as Orion Strategies.

The Council’s president is Rupert Hammond-Chambers who is also a board member of Project 2049. In addition to the US-Taiwan Business Council and Project 2049, he is managing director of Taiwan for Bower Group Asia and responsible for the Group’s Asia defense and security practice. Bower Group, in turn, is involved with several, presumably independent ASEAN think-tanks and the US-based Center for Strategic and International Studies (CSIS), in which Schriver remains a senior policy adviser. It has also been associated with the CSIS-linked Asia Maritime Transparency Initiative (AMTI), as well as the US-ASEAN Business Council.

Dan Blumenthal is still another Project 2049 board member. He is Asia chief at American Enterprise Institute (AEI), whose luminaries orchestrated the invasion of Iraq and the subsequent, disastrous occupation. Blumenthal is also a member of the secretive John Hay Initiative (JHI), a “volunteer network of over 250 foreign policy, defense, and intelligence experts who advise elected officials and candidates for public office.”

The JHI was named according to John Hay, who in the 1890s developed the “Open Door Policy” that permitted America to preserve its “anti-colonial” image, even as it benefited from China's colonial plunder. Schriver’s Indo-Pacific strategy seems to be following in the footprints.

In the Project 2049 Institute, Schriver and his colleagues have urged America to prepare against Chinese territorial incursions. In Armitage International, they have served clients that are willing to pay for preparing against such incursions.  And in the Pentagon, Schriver presumably “oversees” such activities.

It’s a shrewd arrangement that allows companies - domestic, foreign, military, NGOs, take your pick- to advance policy positions as lobbyists might. And it takes place at the highest levels of US government, under the guise of neutral advisories.

It would also seem to penalize the sovereign interests and peoples of the United States, China and the rest of Asia. And it has potential to turn into a tragic catastrophe.

GeopoliticsTaiwanIndo-Pacific
printTweet
You might also like
Back to Top
CHINA US Focus 2021 China-United States Exchange Foundation. All rights reserved.