Time for the U.S. & China to Rethink Perspectives on Jobs and Technology 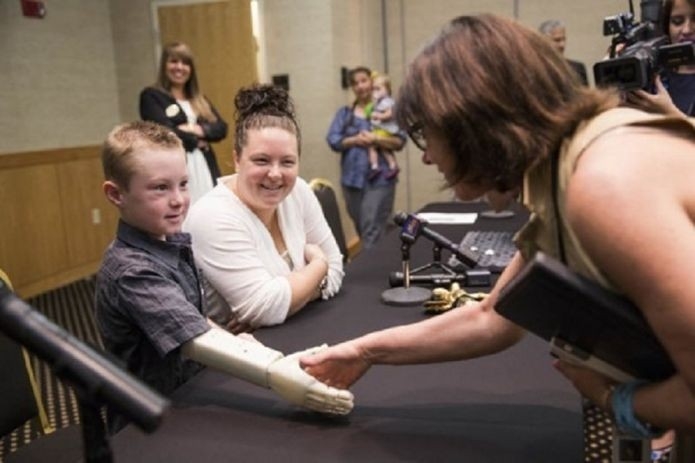 Alex Pring, a 6-year-old Florida boy born with a partial right arm, talks to student Albert Manero — who helped engineer a new prosthetic limb and hand for the child. (HANDOUT/REUTERS)

Technology and jobs, whither goest thou?

Whether in China or the United States, it is time to pause and assess the very real impact of technology’s advances on those who will lose their jobs today as the so-called “jobs of tomorrow” are created.

Too often, “globalized” business leaders and macroeconomists blindly welcome every advance in productivity, while investors in turn reward news of resulting job reductions with an upward tick in share prices. As technology advances, and wealth is increasingly concentrated, the challenges of job creation and the need for bipartisan discussion on a way forward grow more increasingly pressing.

And in a report released early this year at the World Economic Forum in Davos by Oxfam, the world’s eight richest billionaires now control the same wealth as do the poorest half of the earth’s population.

It is no surprise then that inequality – its causes and possible solutions – is a ubiquitous topic of discussion. The debate over economic inequity rages in the East as in the West. Raising employment levels is seen as a major challenge for developing and developed economies alike, and that includes both China and the United States.

No industry is exempt, and no country, no matter how protected, is able to escape the elimination of jobs “of the past” – too often with little consideration of the “people of today.”

All too often the blame is laid squarely on the shoulders of globalization. Witness the breakout of protests in Hamburg at the G20 summit. Witness also the relative success of politicians who promised protections in the form of trade tariffs and a closing of borders. Enduring wage disparities and outdated and imbalanced tax structures are also seen as contributors to growing inequality.

However, is it only the export of jobs that has led to unemployment or are we entering a brave new world of technology steadily eroding once secure foundations of employment?

Directly addressing that question can help lead to possible solutions, drawing perhaps on apprenticeship programs and new management-employee relationships that may well disrupt our present thinking of the workplace.

A revolution is certainly on the way. 3D printing and the potential impact on design and manufacturing of “printing” in a multi-dimensional manner is an example.

Essentially one can design a pair of shoes, use a 3D-printing facility and see the immediate gratification of creativity.

Take another example – driverless cars, which threaten to disrupt a range of every day jobs, from that of traditional drivers and mechanics to those of the few who may still be managing gas stations. Self-service gas pumps displaced attendants. Charging stations for electric cars may well further disrupt gas stations eroding employment opportunities.

The ruthless advance of technology has implications for Asia, particularly in the garment industry. In many countries, the clothing industry did for Asia what the auto industry had once done for the United States in terms of offering rising wages and providing non-farm employment.

Imagine a clothing industry, however, that is brought to the realm of desktop publishing. As technology displaced a range of publishing jobs, an increasingly self-manned and self-driven clothing sector could significantly reduce, if not eliminate, the need for machine operators and button sewers. These and other jobs allowed a generation in Asia to entertain visions of life outside the farm.

The rise of manufacturing in China, Vietnam and elsewhere in Asia has helped nations transition between an agrarian-society towards more services-driven economies. Factories have employed millions as typically young Asian workers moved on from their rural, agrarian lives and transitioned to more urban settings.

Now, an increasingly automated manufacturing industry could see robotics limit the opportunities and the path from factory work to the middle class.

Even in the services sector, the impact of technology on jobs is growing. A software program can eliminate the army of junior researchers and outsourced analysts who have been extracting the data, filling the spreadsheets and crunching the numbers.

Ever smarter “smart” machines are capable of collecting and processing information. The next step for robo-advisors: drawing inferences, answering questions and recommending actions.

As early as 2014, the Associated Press began to automate some of its corporate earnings reports. Robo-journalism has arrived.

Where will all these advances in technology take us?

Countries throughout the world have used monetary and fiscal policy to spur economic growth in the hope that greater growth will lead to higher employment.

Taxation is another weapon in the arsenal of governments seeking to incentivize behavior and job creation.

In this brave new world of the knowledge economy, such government measures alone are unlikely to be sufficient. Indeed, the solutions will have to be found outside of government, in our communities and businesses.

Providing equality of opportunity to all citizens should remain a guiding principle.

Education will be key. Business, government and civil society leaders must come together to ensure the quality of education is improved to meet the demands of a technology-driven knowledge economy. More importantly, whether in New York or Beijing, or anywhere else, citizens must not be barred from quality education because of high costs.

Optimists feel that productivity increases will eventually lead to the creation of an entire range of jobs not thought of earlier. Pessimists look at the pace of automation and see a dystopian world ahead. Realists recognize that whatever the future holds there is an immediate scenario of displacement and a growing challenge of dislocation for millions of people.

As humanists, we argue that, regardless of the scenario, much more should be done to recognize and address the needs of the all too many whom are all too forgotten and increasingly left behind.  That is as true in the United States as in China.

Information TechnologyEmploymentChina educationWorld Economy
printTweet
You might also like
Back to Top
CHINA US Focus 2018 China-United States Exchange Foundation. All rights reserved. Disclaimer