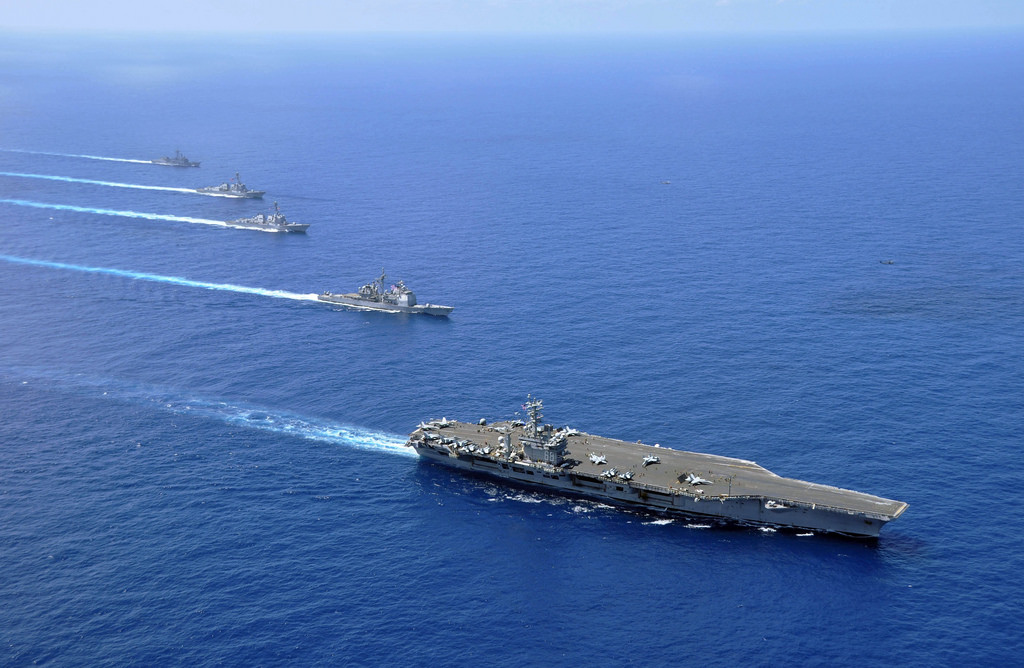 Tensions between China and the United States are rising on multiple fronts. The onset of dueling tariffs is threatening to trigger a full-fledged bilateral trade war. Beijing’s anger is rising about Washington’s growing attempts to upgrade diplomatic and military ties with Taiwan. Finally, the two countries are sparring dangerously over their respective policies and goals in the South China Sea.

All of those disputes are dangerous, but the Taiwan and South China Sea issues hold the most potential for poisoning the bilateral relationship and escalating into war. Compromise regarding Taiwan is inherently elusive, but a modest change in U.S. policy could significantly dampen tensions in the South China Sea. Specifically, Washington needs to dramatically reduce its confrontational “freedom of navigation” patrols and stop treating Beijing as a disruptive element, if not an outright threat, in that region.

One longstanding reason for a large-scale U.S. naval presence in the western Pacific is the importance of unimpeded shipping to the health of the global economy. U.S. political and economic leaders fret about potential disruptions to the flow of commerce and have done so for decades. That is an understandable concern. The United Nations Conference on Trade and Development (UNCTAD) estimates that 80% of world trade measured by volume and 70% measured by value travels by sea.

The sea lanes transiting the South China Sea are especially crucial arteries. UNCTAD’s analysis shows that one-third of global shipping passes through that body of water. A conservative estimate of the annual dollar value by the Center for Strategic and International Studies’ China Power Project put the figure at $3.37 trillion, but concedes that other estimates are as high as $5.3 trillion. The CSIS study emphasizes that the waters “are particularly critical for China, Taiwan, Japan, and South Korea, all of which rely on the Strait of Malacca, which connects the South China Sea and, by extension, the Pacific Ocean with the Indian Ocean.”

U.S. leaders increasingly view China as a potential menace to that commerce. The root of Washington’s suspicion is the extent and intensity of Beijing’s territorial claims in the South China Sea. It is not a new issue. In December 1947, the government of the Republic of China (Chiang Kai-shek’s regime) issued a map delineating an 11-dash line (later reduced to a 9-dash line) that laid claim to more than 80% of the South China Sea. The communist regime that overthrew Chiang two years later and established the People’s Republic of China (PRC) subsequently embraced that claim.

Until the past decade or so, though, Beijing’s audacious territorial ambition remained little more than theoretical. The PRC lacked the military power to make even a credible effort to enforce its claims. But as China’s economic and military power has grown, PRC leaders have become more insistent that most of the South China Sea is rightfully Chinese territorial waters. Beijing also has dredged areas surrounding partially sunken reefs to expand the land areas on those reefs into full-fledged artificial islands. Even more troubling from the U.S. perspective, China has built structures, including military airstrips, on those new islands. Although China is not the only country to pursue such reclamation projects (Vietnam, in particular, also has done so), the PRC’s program is the most extensive.

Washington has flatly rejected Beijing’s stance regarding the South China Sea. U.S. officials have repeatedly condemned the creation of artificial islands, especially China’s building of military installations. The U.S. Navy also has increased the frequency of patrols through the South China Sea and explicitly labeled them ‘freedom of navigation patrols.’ That term implies that Washington regards China’s growing presence, including an increase in PRC naval activities, as a potential threat to free navigation. Beijing, in turn, has reacted angrily to intrusive U.S. patrols so close to the Chinese homeland, condemning them as a serious provocation.

Washington needs to reconsider its policy in the South China Sea. The PRC’s territorial claims are not justified by either history or law — as the International Court of Arbitration ruled in 2016 in a case brought by the Philippines against Beijing. But given its own extensive shipping that transits the South China Sea, the PRC also has a powerful incentive to keep the waterway open.  The amount of Chinese exports transported through that body of water is larger than that of any other country, accounting for nearly 25% of the overall flow. Indeed, some 40% of China’s total exports travel those sea lanes.

PRC leaders know that if they disrupt that commerce, the United States (and other naval powers such as Japan and Australia) could easily choke-off the flow of Chinese products as well. Given its export-driven economy, causing problems in the South China Sea would be an especially foolish policy for Beijing to adopt. Chinese leaders seem to recognize that point, as evidenced by their work with member states of the Association of Southeast Asian Nations (ASEAN) to establish a “code of conduct” that could minimize disputes in the South China Sea.

Instead of viewing China as a potential threat to South China Sea commerce, the Trump administration should recognize that the PRC can be a useful partner in helping to keep the sea lanes open. One should not expect Beijing to abandon its territorial claims, and that stance will always have a somewhat menacing potential. Chinese leaders undoubtedly want their country to be recognized as the leading power in the South China Sea; Washington cannot possibly achieve the goal of having Beijing accept continued U.S. hegemony there. At the same time, the United States has no intention of acquiescing in the PRC’s legal quest to convert the South China Sea into Chinese territorial waters.

There is little chance of a comprehensive settlement to completely resolve such an impasse in the foreseeable future. But the two sides can reach a more limited accommodation that would reduce the upward trend in dangerous tensions. The main problem is China’s anger about the U.S. Navy’s freedom of navigation patrols. U.S. leaders should offer to greatly reduce the number of those patrols, and avoid sending them into the vicinity of Chinese-built artificial islands, as long as Beijing is willing to offer formal assurances that it will take no action to disrupt shipping through the South China Sea, and will, in fact, work to combat existing threats, most notably the continued problem of piracy in waters near the vital Strait of Malacca.

Such a de facto truce and modus vivendi would not guarantee lasting harmony regarding the South China Sea. However, it would markedly reduce diplomatic strain between Beijing and Washington — and, perhaps even more importantly, decrease the mounting tensions between the naval forces of the two countries. That potential achievement is well worth Washington taking the initiative and offering such a proposal to Beijing.

South China SeaFreedom of Navigation Operation
printTweet
You might also like
Back to Top
CHINA US Focus 2022 China-United States Exchange Foundation. All rights reserved.