A Spotlight on Xi-Obama Meeting at APEC 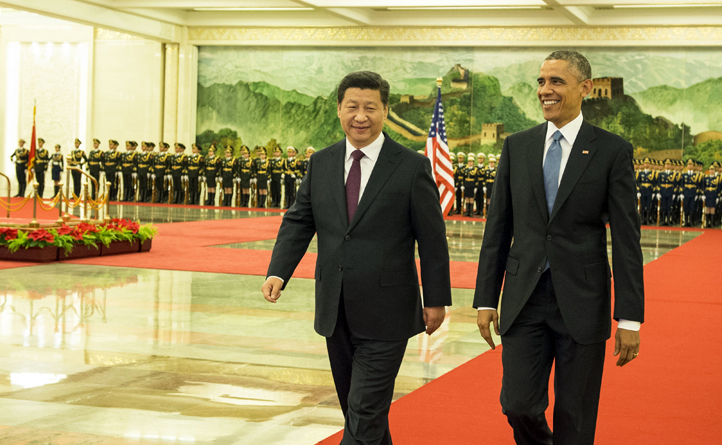 The Asia Pacific Economic Cooperation (APEC) summit is a stage for multilateral diplomacy; but it also offers a convenient platform for bilateral meetings of member economies.

US President Barack Obama will be in Beijing from November 10 through 12 to attend the non-official meeting of APEC leaders and to make his second state visit to China. During this period, his meeting with Chinese President Xi Jinping is expected to draw particular attention.

Xi and Obama will hold their meeting against the backdrop of a changing international and domestic landscape.

More than a year after the Sunnylands estate meeting in California, significant changes have taken place in both countries, as well as in the world. Deep in its reform campaign, China is facing the question of how to seize the strategic opportunity to push forward reform and maintain favorable relations with the rest of the world.

In the wake of a landslide victory of the Republican party in the mid-term elections, Obama is facing the question of how to round off the remaining two years of his tenure and leave behind a historical legacy for the world to remember.

The international community is also facing new challenges, and protracted problems such as global climate change, terrorist threats, Korean and Iranian nuclear negotiations, Iraq, Afghanistan, Syria, the Ukraine and the Ebola panic have inflicted new troubles on the world.

All these questions call for an exchange of thought and cooperation between the two globally influential powers of the United States and China. They need to do some solid work for all-round cooperation, while controlling their differences for better mutual understanding, so that they can jointly contribute to global peace and prosperity.

The Xi-Obama summit will touch upon a slew of topics.

On bilateral relations, the summit is expected to reaffirm commitment to the establishment of the new type of big power relationship that China suggested. Both countries have previously reached a consensus on the general principles of such a relationship, but they need to achieve a more common understanding on how to implement this concept.

Climate change and new energy may be high on the agenda. It is relatively easier for the two sides to reach an agreement on these two issues, for China is turning to a low-carbon economy in its development and the US boasts advanced technology in new energy. Cooperation in this field will benefit both sides.

Terrorism will also be a major topic, for both sides regard it as a serious danger to the human race. The two countries can work in unison to fight terrorism.

Sino-Japan relations, the Korean nuclear problem and a few other regional hotspots are also unavoidable in the summit talks.

Both leaders may also exchange thoughts on other global security concerns, such as Ebola, the Islamic State, and the Ukraine crisis.

The Free Trade Area of the Asia-Pacific (FTAAP) will be a focus of attention with regard to Sino-US regional cooperation.

The idea of a FTAAP was initiated by the US in 2006. The aim was to create some institutional binding forces, and a multilateral beneficial mechanism so as to strengthen economic and trade ties among the member states and, as a further step, work towards Asia-Pacific economic integration.

As a major international trading nation, China supports the idea of a FTAAP, and hopes for an early commencement of negotiations for its establishment. However, the US has been actively engaged in the Trans-Pacific Partnership (TPP) talks in recent years and has put FTAAP out of its head. Its effort has helped increase the number of TPP members from the original four to 12. Negotiations are proceeding at a breakneck pace. It is very likely that an agreement will be reached by the end of next year, although it may come later than Washington has expected. The TPP has provided an important economic platform for the US to pivot to the Asia Pacific. Besides hoping that the TPP will help reshape international trade in the future and influence the orientation of regional cooperation in Asia Pacific, Washington wishes to use TPP to counterbalance China’s economic and geopolitical influence. Therefore, what Obama will say on the FTAAP issue will be a major highlight of his summit talks with Xi.

The Xi-Obama summit will be held in a relaxed atmosphere, but there may not be substantial progress in the effort to settle differences.

A series of communication efforts between the two countries on various levels have created a favorable atmosphere for the summit. After Assistant Minister Zheng Zeguang, who is in charge of the North America affairs in the Chinese Foreign Ministry, visited the US at the end of August, the US National Security Adviser Susan Rice went to Beijing and met with President Xi and other Chinese leaders. Soon after that, Chinese Navy commander Wu Shengli visited the US, followed by Foreign Minister Wang Yi’s visit from September 30 through October 2. Obama met with Wang, who also met Rice for a second time in a month and held talks with Secretary of State John Kerry. Then Wang Guanzhong, deputy chief of the general staff of the People’s Liberation Army, went to the US in mid-October to host the 15th Defense Consultative Talks. State Councilor Yang Jiechi held talks with Kerry on October 18 and two days later he met separately with Rice and US Defense Secretary Chuck Hagel.

It is predictable that after the Xi-Obama summit, both countries will reach a consensus on anti-terrorism efforts, global climate change, bilateral investment agreement and Afghanistan’s reconstruction, but will find it difficult to settle their differences over such issues as network attacks, East and South China Seas disputes, and the US-Japan alliance. As for the Asia Pacific Free Trade Zone advocated by China and the US-led TPP, whichever is set up first will become the largest free trade organization in the world. China and the US have been engaged in tense rivalry over this issue. Rivalry is also going on over the planned establishment of the Asia Infrastructure Investment Bank proposed by China.