AIIB Is Not to Challenge the U.S. Dominance 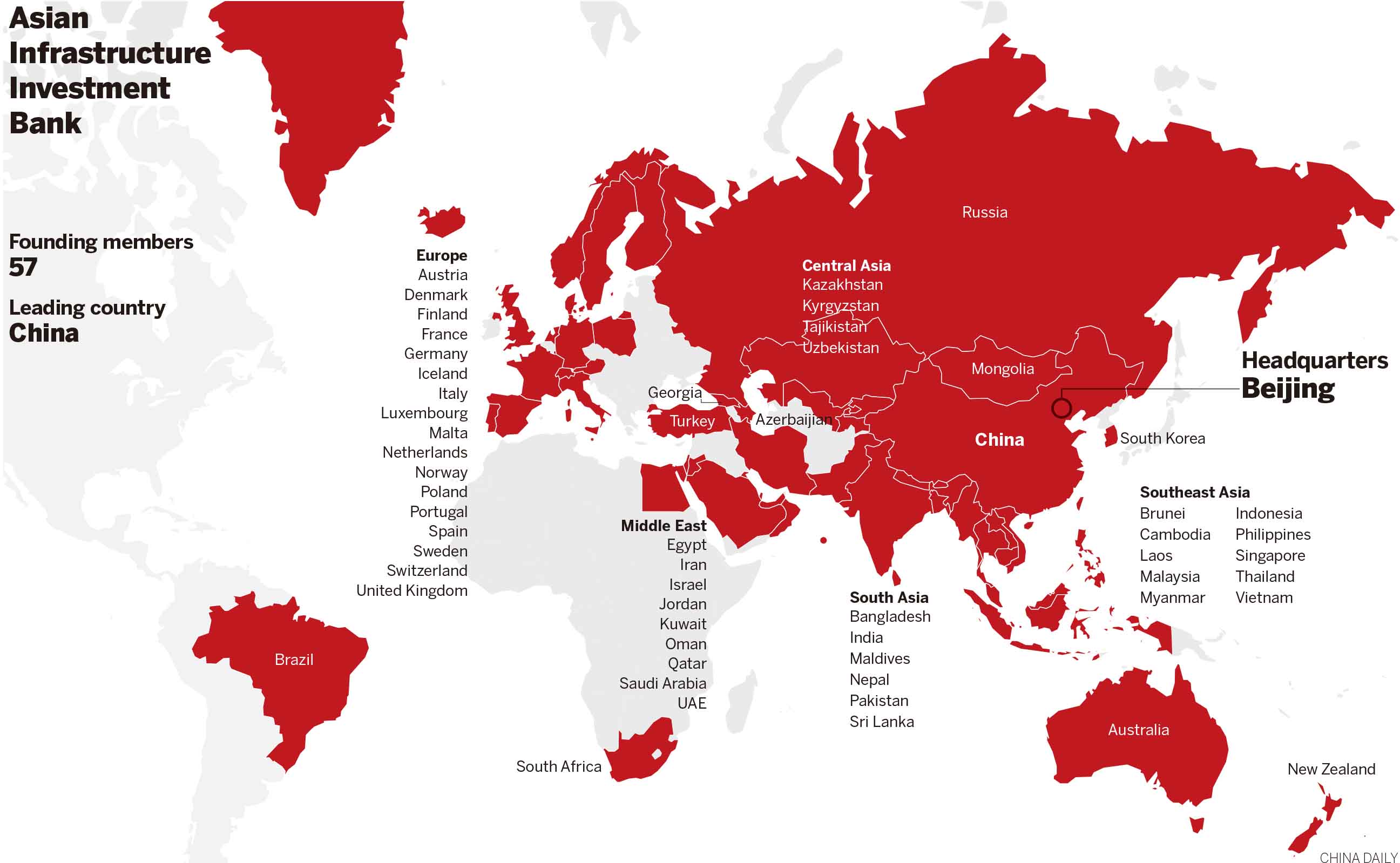 With the number of founding members shooting up to 57 just before the deadline, the China-proposed Asian Infrastructure Investment Bank (AIIB) has proven its popularity not just within, but far beyond Asia. Whatever initial suspicion or hesitation that some non-Asian countries might have had are now clearly gone with their last-minute applications. Multilateral institutions like the World Bank, the IMF and the Asian Development Bank have also welcomed the initiative and expressed interest in cooperation.

Still, not everyone is happy with it. The United States, clearly disgruntled by what it views as an attempt to weaken its influence in Asia, has been raining doubts on the idea ever since it was first brought forward. Some applicants were even specifically warned not to join. The UK, for instance, irritated the United States by opting for membership. Yet not even such stark opposition from the US could turn its traditional friends and allies away from the initiative. A dozen Western countries followed the UK’s suit right after its surprise announcement of application.

In fact, it is only sensible for these countries to want to make sure that they will not miss out on such a golden opportunity. From China’s perspective, the global economic reality, to which the growth of Asia and itself matter a great deal, has changed significantly over the past few decades. Estimated by the ADB, Asia needs 8 trillion USD by 2020 invested in national infrastructure and another 290 billion USD in regional infrastructure to buttress growth, way beyond the capacity of the World Bank or any other existing financial institution in the world. The creation of the AIIB provides a timely solution, which will bridge the funding gap minus the kind of lending threshold that Asia’s developing countries often find intimidating. The AIIB is not meant to replace the existing institutions but to complement and work with them to better meet the financing needs of this region.

As to how the AIIB will be operated, China has been clear all along that openness, transparency and win-win cooperation shall always be at the center of the bank ever since Chinese President Xi Jinping first raised the idea to Indonesia’s then-President Susilo Bambang Yudhoyono during his visit to the Southeast Asian nation in October 2013. Xi said the bank is designed to support regional connectivity and economic integration. A year later, the finance ministers and representatives of the first group of 22 prospective founding members signed an MOU agreeing to establish the AIIB. Even after that, China continued consultations with the US, Japan and other non-Asian countries to get them on board.

Some media reports in the US characterize the AIIB as China’s tool to challenge US domination over the rules of the game in Asia. But so far, it seems that nothing about the AIIB supports that assumption. It is true that a significant part of the funding may come from China, yet the Chinese government has made it a point from the very beginning that decision-making in the AIIB will be primarily based on consensus building and thorough evaluation. The design of its institution will not give any country the de facto veto power like in the World Bank or IMF. In other words, the AIIB is not poised to become a political and diplomatic lever for China to compete with the US in the financial arena. Accepting the applications of countries like the UK, France, Germany and Italy says even more about the importance the AIIB’s creators attach to ensuring good governance. As a matter of fact, France and Germany have expressed confidence in the constructive role that the bank will play in Asia’s economic and social development and, in turn, the global economy.

In the late 1990s, during his visit to the UK, the then Chinese Premier Zhu Rongji was asked by then-governor of the Bank of England when China would open up its capital market. The premier’s answer was something to the effect that when it comes to finance, China would like to learn from the UK like a student from his teacher and open up its financial market the day it graduated. Around twenty years later, China has finally made its first major mark in the financial world by proposing the creation of the AIIB. It is also the latest sign of China’s readiness to further open up the Chinese financial market. Though it is a bank for Asia, all countries, including the UK and the US, are welcome to join.

It may sound a little blunt, but Asia needs the US to be more relaxed about China. Isn’t it better to invest in economic growth rather than arms and drills? The world is no longer held together by guns and alliances. If the US wants what’s best for Asia and for itself, the smart thing to do is to acknowledge China’s role and welcome its contribution. According to our observation, there are signs suggesting that perhaps the US is starting to come around and just needs a bit more time before agreeing that it doesn’t always have to be a zero-sum game after all.