Are China and the U.S. Heading for Open Confrontation? 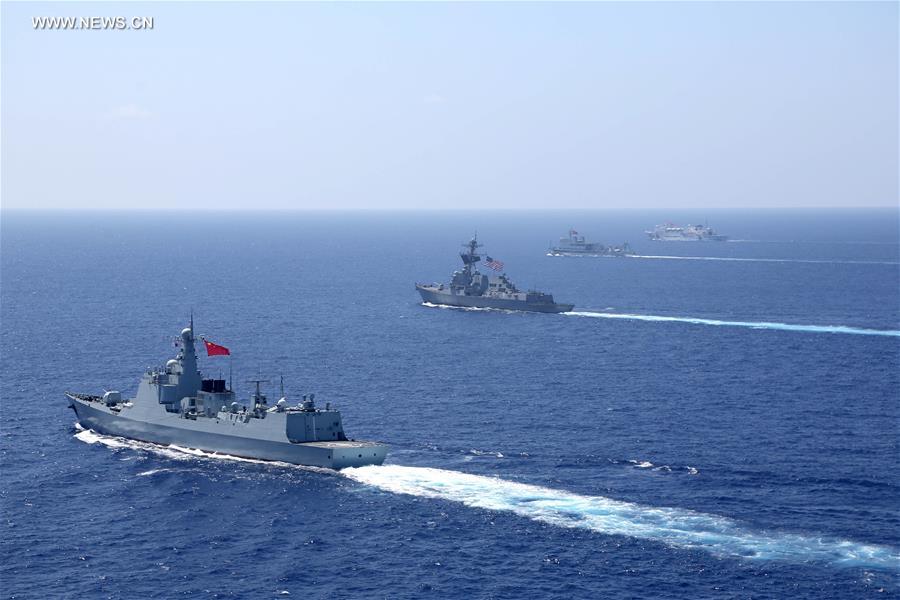 On 30 September 2018, just one day before China’s National Day, the US guided-missile destroyer USS Decatur entered, without China’s permission, within 12 nautical miles of Nanxun (Gaven) and Chigua (Johnson) Reefs in the Nansha (Spratly) Islands. Both features are under China’s effective administration. A Chinese navy ship conducted an identification and warning process to drive the USS Decatur away. According to information reported in the news, it is the fourth time this year that the U.S. navy carried out such so-called Freedom of Navigation (FON) operations in the South China Sea.

This recent FON operation was the U.S. latest attempt to counter what it claims as China’s efforts to limit freedom of navigation in the strategic waters of the South China Sea.

After the incident, both China and the U.S. stated their official positions relating to the issue. The statements from China’s Ministry of Defense and Ministry of Foreign Affairs specify the following messages. First, China has indisputable sovereignty over the South China Sea islands and their adjacent waters. Second, the U.S. operation was provocative. It violated basic norms governing international relations, threatened China's sovereignty and security, and disturbed regional peace and stability. Third, China strongly urges the US to immediately stop such provocative activities. Fourth, the Chinese side will take all necessary measures to safeguard its national sovereignty and security.

This is largely the same as the official rhetoric both countries used with regard to the three previous operations this year. They do not agree on the navigational nature of the U.S. warship transiting the waters close to China’s islands in the South China Sea, leading to friction of naval vessels at the operational level. This resembles the 2009 Impeccable case where the USNS Impeccable entered China’s Exclusive Economic Zone, 75 nautical miles away from Hainan Island, and was “shadowed” by Chinese vessels. The difference is that since Trump took office the US has markedly stepped up freedom of navigation operations in the South China Sea and the location of relevant operations are much closer to China’s land territory and therefore more provocative. Furthermore, the recent naval friction happened at a time when bilateral relations have become tense in all areas.

The latest China-US incident in the South China Sea is only part of the whole picture between China and the US.

China-US trade friction is escalating. On 24 September the US started imposing 10% tariffs on $200 billion worth of products imported from China, with additional duties expected to rise to 25% from 1 January 2019. The tariff list covers several thousands of products from China. In response China raised 5 to 10% tariffs on $60 billion in imports from the US, ranging from farm products and machinery to chemicals. Earlier in June 2018 the U.S. slapped an additional duty of 25% on approximately $50 billion worth of Chinese imports containing industrially significant technologies, including those related to China’s “Made in China 2025” industrial policy. In retaliation, China put an extra duty of 25% on the same value of imported US products including pork and soy beans.

The current friction between the world’s two biggest economies is moving beyond trade. When addressing the UN General Assembly on 25 September President Trump accused China of seeking to interfere in the US congressional elections, marking a new phase in the escalating US campaign to put pressure on China. Following Trump’s rhetoric,US Vice President Mike Pence, in a speech at the Hudson Institute, lashed out at China’s policies on foreign trade, foreign relations, and domestic affairs including, in particular, Taiwan. He obviously chose Japan’s side against China on disputed maritime issues. Although Pence emphasized at the end of his speech that “competition does not always mean hostility,” he hinted in the beginning that it is obviously China that is now “contesting [America’s] geopolitical advantages and trying [in essence] to change the international order in their favor”. The Trump administration, as Pence stated, has adopted a new approach to China, although he did not clarify what it meant. Chinese Ambassador to the U.S. Cui Tiankai, at an exclusive interview with Fox News on 14 October, stated that all the relevant accusations from Pence were “groundless”. It is the U.S., he said, that started the China-US trade war. He added that American people and business had benefited a lot from bilateral trade.

The Taiwan issue is one of China’s core interests, however Trump has attempted to challenge China’s bottom line. Right after Trump became president-elect, he claimed that the One China policy can be negotiable. The crisis was resolved only after bilateral communication and Trump said that the US government adheres to the policy. Earlier this year, Trump signed the Taiwan Travel Act into law. The US endorsement of the act has increased the possibility of military friction or even confrontation between China and the U.S. Finally, the U.S. recently approved the sale of $3300 million in spare parts for Taiwan's F-16 fighters.

China-US military-to-military relations are considered the thermometer of bilateral relations. The US seems to retreat from the previous position of enhancing bilateral military contacts in order to, as some observers have commented, “weaken China’s defence modernisation”. The Pentagon has withdrawn the invitation to China to participate in this year's Pacific Rim exercise. Recently the US imposed sanctions on a Chinese military agency and its director for buying Russian fighter jets and a surface-to-air missile system. In response, China has denied a recent request from the U.S. for its warship to visit Hong Kong and, as reported, postponed joint military talks between US Secretary of Defence James Mattis and Chinese Defence Minister Wei Fenghe.

In the middle of this friction, China and the US agreed to postpone the Second Round of China-US Diplomatic and Security Dialogue previously tentatively scheduled for mid-October. The Dialogue sets the tone for bilateral political and security relations. According to the Chinese Foreign Ministry, it is the U.S. side that expressed its intention to postpone the Dialogue. Friction in all areas between China and the U.S. prompted the U.S. scholar Mark Valencia to argue that these two countries are in a new “cold war”, and if not controlled well, the “cold war” might escalate into “hot war”.

Competition between China and the U.S. exists even though the U.S. is still the sole superpower in the world and even though China insists that it has no intention of challenging its superpower position and only focuses on its own development. China still lags far behind in either economic or military strength.

Whilst in 2009 open confrontation between China and the U.S. seemed a remote possibility, today we should think twice. Under this tense environment, any accidental, or worse, intentional incident in China’s maritime area may lead to military confrontation. The next question is whether both countries are ready for such an open clash. Can both countries afford to such a result?

Xi and Trump are expected to meet at the G-20 Summit (2018) in Argentina to try to improve China-US relations. Clashes between big powers are detrimental not only to both countries but also to the peace and development of the world. In the meantime, military personnel at the operational level from both countries should be very careful at sea, following the 2014 Code for Unplanned Encounters at Sea (CUES) to avoid military clashes in the East and South China Seas.

Trade WarCold War
printTweet
You might also like
Back to Top
CHINA US Focus 2020 China-United States Exchange Foundation. All rights reserved.