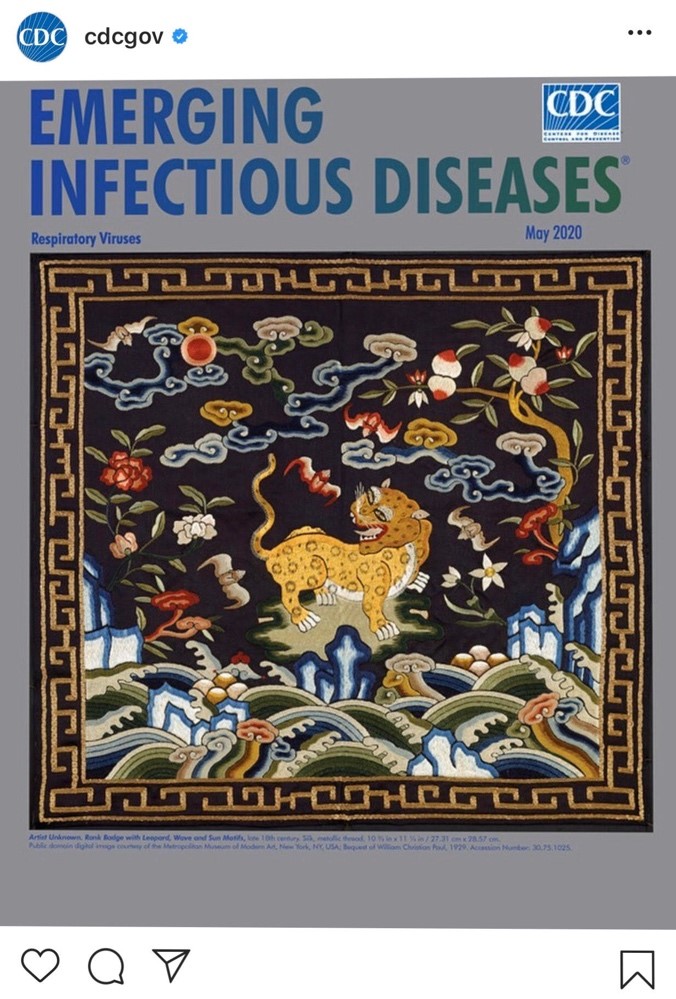 The Chinese art on the May 2020 cover of CDC’s Emerging Infectious Diseases journal makes for a stylish look at first glance. It’s a colorful late 18th century Qing dynasty tapestry of stylized clouds, ripe peaches, a mythical leopard, and bats – lots of bats. Red and brown bats flit and swoop this way and that across an inky black background.

As anyone with a modicum of familiarity with Chinese art and folklore immediately recognizes, the furry, winged mammals are symbols of good luck because the word for bat is homophonous with “fu”, which can mean fortune.

Yet one suspects that good fortune was not what the publication department at the CDC had in mind when they chose the eye-catching Chinese fabric to adorn the May issue. The coronavirus, known as Covid-19, is believed to have come from bats in China. Far from being a representation of fortune, the embroidered Mandarin Square has been slyly hijacked to signal misfortune – not good luck, but bad luck.

Bats, never a popular creature to begin with in American culture, get less respect than ever during this pandemic since the working theory is that the deadly virus somehow jumped from bats, who can act as reservoirs for viruses, to humans, likely via a third animal which, once identified, will no doubt also be a newfound object of hate.

Meanwhile, China, according to the latest polls in the US, is viewed with increasing suspicion and fear, and a spate of hate crimes targeting innocent individuals of Asian descent has been widely reported.

By conflating China with bats in a time of crisis, the CDC joins a coordinated US media campaign, wittingly or not, to stigmatize China and deflect attention away from US incompetence.

President Trump has famously referred to Covid-19 as “the Chinese virus”, and his secretary of state, Mike Pompeo, routinely refers to it as the “Wuhan virus”. (Though when Pompeo put pressure on European countries to do likewise, his ill-mannered initiative fell apart.)

The CDC's reputation, like that of the Trump administration – which has handled the crisis as poorly and boorishly as can be imagined – is in tatters. Under the shaky leadership of Trump loyalist Robert Redfield, the CDC refused readily available tests from Germany, insisting on go-it-alone production. Then it further delayed urgently-required testing by bungling the development and distribution of the made-in-USA tests. The initial batch of tests the CDC produced were worse than useless, as they gave false positive readings due to inadvertent contamination during production.

Valuable time was lost. The chance to trace and isolate the virus had come and gone. A similar failure to rise to the occasion crippled the promotion and distribution of face masks. Governmental authorities falsely claimed masks to be of no use, not because that was what the science said, but because they were too embarrassed to admit the US was unprepared, even with the two-month lead of China’s battle against the virus in the news. The supply of masks was woefully low, as was the supply of tests, so false claims were made to the effect that neither were of any importance outside a hospital setting.

This is not the right time for the CDC to be shifting attention to China with a cover that distracts from the here and now by pointing the other way, in effect exclaiming, “Look, over there! Look at all those bats in China!”

The cover art, which consists of a Mandarin square (also known as rank badge or puzi), is introduced in the back of the journal thusly:

“While walking along the bustling streets of Beijing, Chengde, Shenyang, Wuhan, or other Chinese cities during the Qing dynasty (1644–1911), people would regularly brush past bats, cranes, pheasants, peacocks, egrets, or ducks.…”

Having set the scene with this touch of local color (note that the bat is prominent in the list of things that Chinese have since time immemorial had a habit of “brushing past”), the end note goes on to say that the “birds and animals featured on the various rank badges (excepting, among others, dragons, unicorns, and qilin) may also serve as zoonotic reservoirs capable of transmitting viral pathogens that can cause respiratory infections in humans.”

This is an amazing claim for a number of reasons. A scientific journal hardly need caution its readers that dragons and unicorns are not among the zoonotic reservoirs that transmit pathogens. Yet it goes out of its way to stress that animals depicted in age-old Chinese art “can cause respiratory infections in humans.”

The CDC’s journal, like other scientific publications, includes numerous articles that were months, if not years, in the making, and the May 2020 issue covers a wide variety of research topics. In keeping with the cover theme, there are several new articles about China:

- “Risk for Transportation of Coronavirus Disease from Wuhan to Other Cities in China”, Z. Du et al.

Explaining the unusual choice of cover, the editors point out that bats, a mainstay of Mandarin squares, are “reservoirs for Hendra and Nipah viruses and for the severe acute respiratory syndrome (SARS) coronavirus,” and that the “current COVID-19 pandemic is caused by a coronavirus named SARS-CoV-2.”

The editor’s note goes on to explain that rank badges similar to the Mandarin square depicted on the cover were a mark of status in the Qing Dynasty. The concluding note is as banal in its generality as it is unsettling in its attempt at humor.

“Many factors affect interactions among humans, animals, plants, and the environment, creating greater opportunities for novel pathogens, such as SARS-CoV-2 to emerge.”

“Perhaps one’s rank and status might confer favor in some circles, but they offer no protection from human-to-human transmission of SARS-CoV-2 and other viral respiratory infections and illnesses.”

That the quotes above are taken from page 1086 of the May journal is a reminder that a prestigious academic journal is a publishing feat of no small significance. There is much good science between the covers, and much hard work goes into it.

There would be little reason to judge the journal by its cover if the cover wasn’t so judgmental about China. But in the context of much-documented racial signaling and so-called “dog whistles” on the part of an administration that calls Covid-19 “the Chinese virus”, whatever beauty the CDC Chinese “bat cover” may possess as art is lost in the ugly politics of the moment.