China and the G20 in the Age of ‘Messy Multilateralism’ 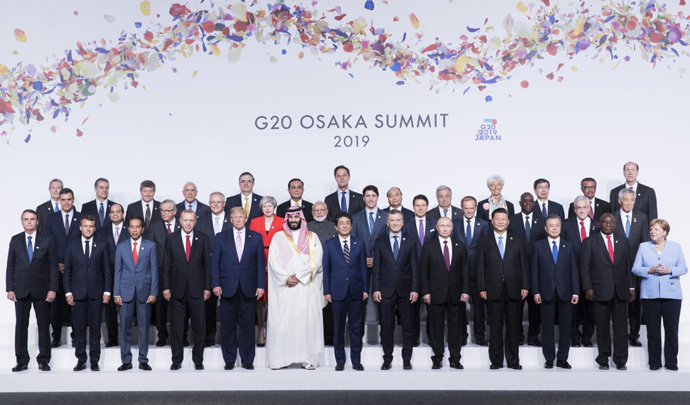 The G20 Leaders’ Summit takes place in Osaka, Japan against a backdrop of escalating tensions between China and the U.S. and talk of decoupling that goes beyond their economic and trade relationship. It also comes at a time when the idea and practice of global economic multilateralism is under fire.

The developed countries are able to set the agenda but unable to dictate outcomes; as such, they prefer to work – and lead - within narrower, like-minded coalitions. The developing countries on the other hand, denied rule-making powers but capable of exercising blocking vetoes, would rather set up their own embryonic institutional architectures (such as the AIIB and the BRICS Bank) while gradually accumulating voice within the existing structures as their economic star rises. Not since the Great Depression days of the 1930s, further, has the global trading system been buffeted by such gale force winds of unilateralism and protectionism as it is today. The Trump Administration has liberally employed, and interpreted, a number of sparingly-used unconventional trade enforcement tools - Section 232 to investigate effect of imports on ‘national security’; Section 301 to investigate ‘unfair’ foreign trade practices; Section 701 to investigate currency undervaluation as a countervail-able export subsidy - in ways that are clearly in variance with U.S. WTO legal commitments.

Be that as it may, the G20 as an institution is arguably the best placed among the admittedly-limited options at hand to cope with the challenges thrown-up by this age of ‘messy multilateralism’. It is relatively new, meaning that it does not carry the baggage of past intellectual or political capture by any one group of nations. It is leader-led and has a restricted membership, meaning it is not hostage to 190 member-strong, endless ministerial-level bickering. Policy attention can be quickly focused on the burning issue of the day. Most importantly, it operates on the basis of a loose consensus and does not maintain a permanent secretariat, meaning it neither issues prescriptive injunctions nor employs an eternal bureaucracy that maintains an interest in perpetually churning out legal outcome documents. The original strength of the Bretton Woods institutions in its heyday in fact, was their accommodation of a plurality of pathways towards broadly consensual policy goals.

China’s size, role and standing within the G20 is unique. At the time of the first G20 Leaders’ Summit in November 2008 in Washington, D.C., the size of China’s economy was $5 trillion; a little over a decade later in Osaka, its size is just shy of $14 trillion – an almost three-fold increase. China today is the world’s second largest economy, the largest merchandise exporter, the second-largest merchandise importer, the largest holder of foreign exchange reserves, and one of the premier destinations of foreign direct investment. In recent times, it has also become a huge source of outward foreign direct investment, courtesy of its Belt and Road Initiative (BRI). As the largest developing country and emerging market economy, it bears an obligation to promote a fairer and more equal global economic order. As the second largest economy, it equally bears an obligation to cooperate constructively with the developed countries to sustain and grow the liberal international economic order.

China has proven to be a ‘responsible stakeholder’ during this past decade as a key G20 member. Ten years ago, China ran a global current account surplus of 10% of GDP, the yuan was significantly undervalued, and the country was a key contributor to global economic imbalances. Fast forward to today and China’s runs a global current account surplus that is a mere 0.4% of GDP, the yuan trades at fair market value, and the country is a key contributor to global economic balance – not imbalances. China’s contribution to global growth, both in 2019 and over this past decade, has also vastly outstripped its peers. As an upper middle-income country, China going forward now needs to creatively embrace advanced country regulatory rules and standards, as codified in OECD or equivalent practices. These range from codes on capital account liberalization to corporate governance to anti-bribery to aid disbursement to state aid disciplines on industrial subsidies to Trans-Pacific Partnership (TPP)-equivalent standards on investment liberalization and intellectual property protection. Once China comes up-to-speed with these standards, it will be better placed to intellectually and institutionally contribute to the future reform of the global economic architecture on terms that favor, both developed and developing countries.

In Osaka, the meeting between President Xi and President Trump on the sidelines will likely overshadow all else at the G20 Summit. Both presidents share a similar want - to exit their trade war with an honorable deal that is sellable back home to key political constituencies.

For Xi Jinping, the continuation of the trade conflict is compelling China to regress to its debt and stimulus-laden ways in order to sustain economic growth. Worse, it is beginning to impose a heavy price in terms of core technology denials. China has an abiding interest in perpetuating a symbiotic high-technology trade and investment relationship with the U.S. The dynamism of China’s domestic innovation system is based in large part on US-owned core technologies. That Washington’s foreign acquisitions and export control rules do not exclude Chinese innovators from acquiring these technologies abroad or working them at home was a key driver in the first place of President Xi’s forthright willingness to wholeheartedly engage his counterpart in Buenos Aires in December 2018.

For Donald Trump, the dilemma is just as great – if not greater. Having coerced China to the table and secured significant but not overwhelming gains that fall short of his previously advertised bluster, how much longer does he roll the dice prior to declaring victory and calling off the trade war. A full-blown conflict with the world’s biggest trader and consumer of American farm products is certainly not how he would prefer to go into his re-election campaign. And the Osaka summit is probably the penultimate or last opportunity to realistically close out a politically marketable deal before the electoral timetable makes compromise a steep, uphill climb.

Whether the two presidents can thread this needle on their trade conflict - or at least stabilize their negotiations, will be a touch-and-go affair in Osaka. If they can arrive at a constructive consensus on the pathway forward, it will provide the veritable wind beneath the wings of global multilateralism. The G20 works best when its multiple stakeholders pull together in the same direction. Should the two presidents fail to arrive at a consensus however, the effect of the G20’s two foremost stakeholders pulling in opposite directions will likely be to splinter and paralyze the larger membership as well as cast a pall of gloom over the future of multilateralism.

G20Multilateralism
printTweet
You might also like
Back to Top
CHINA US Focus 2022 China-United States Exchange Foundation. All rights reserved.