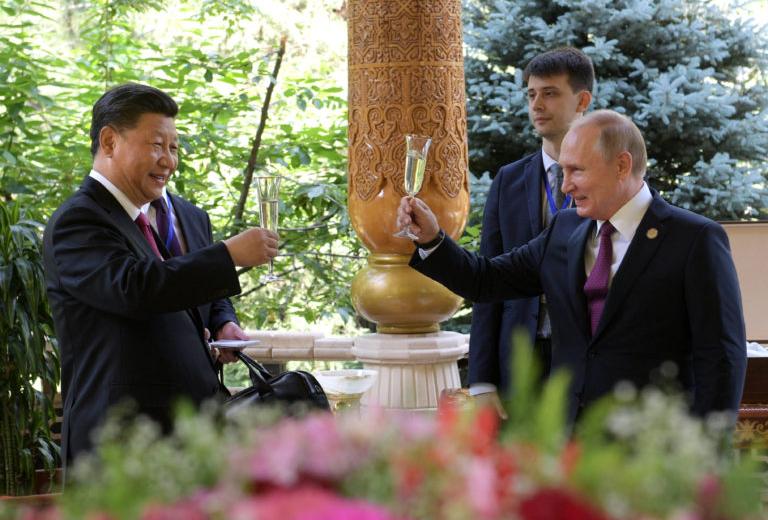 A new and important feature in world affairs is the increasingly close axis of China and Russia. Both Beijing and Moscow recently pronounced their relationship a “comprehensive strategic partnership of coordination in the new era.” The former Soviet Union was the first nation to diplomatically recognize the People’s Republic of China, and today – seventy years later – the two sides claim that they have “the highest degree of mutual trust, the highest level of coordination, and highest strategic value” at any time in their history. Prior to their recent summit meetings in Moscow and St. Petersburg, President Putin added: “Without any exaggeration, [relations] have reached an unprecedented level,” while President Xi Jinping made it personal by describing Putin as his “best and bosom friend,” adding “President Putin is the foreign colleague that I have interacted with most extensively. He is my best friend and I greatly treasure our friendship.” Such gushing hyperbole is indicative of just how close the Eurasian powers have become.

While at its apogee today, the two powers do have a long history of mutual suspicion and antagonism, and even fought a brief border war in 1969. The world should not wish that these two powers and giant neighbors to be locked in antagonism. When this occurred during the 1960s-1980s, it was highly dangerous and destabilizing. Beginning in the mid-1980s the former Soviet leader Mikhail Gorbachev and Deng Xiaoping orchestrated a series of mutual confidence-building steps to improve relations, which culminated in the re-normalization of relations in 1989. Despite a brief hiatus following the collapse of the Soviet Union, the two sides continued their efforts to reduce sources of friction and rebuild their ties. A series of bilateral agreements were made during the mid-late 1990s, with the capstone being the 2001 Treaty of Neighborliness and Friendly Cooperation. Then in 2005 and 2008 the final impediment to ties was removed with twin agreements to formally demarcate their long-disputed 4,300-kilometer common border.

This set the stage for significant growth in the relationship over the past two decades. Trade has grown from a negligible $10 billion in 2003 to almost $100 billion in 2018. While still not in the league of China’s trade with the European Union, United States, Japan, South Korea, or ASEAN, it is now reaching a respectable level. It will continue to grow steadily in the future as long as the Chinese economy and energy demand continue to grow. The two countries have essential economic complementarities: Russia has oil, gas and raw materials – while China offers technology and consumer goods. But if Chinese demand for imported energy and raw materials decline in conjunction with a contracting industrial economy, so too will bilateral trade. The contraction of the Russian economy is also a factor. Various joint projects have been negotiated and announced, including a master plan that has been concluded to develop 205 “major cooperation projects” in China’s northeastern provinces, which are contiguous to the Russian Far East (eastern Siberia), although this initiative has not progressed much. Beijing has also extended credits and loans to Moscow.

The two powers have also forged close defense ties. Russia has also been China’s main – virtually sole – foreign arms supplier. The People’s Liberation Army would not be where it is today if were not for the substantial Russian military assistance. Since 1989 Moscow has sold China a wide range of weaponry and transferred defense technologies, although this defense trade has fallen considerably from a high of $3 billion annually during the 1990s and early-2000s to under $1 billion per annum today. The Russian and Chinese militaries also frequently partner in joint exercises – including massive land, air, and naval operations.

The diplomatic relationship is also extremely strong and increasingly coordinated. The two leaders – Vladimir Putin and Xi Jinping – hold summits twice annually and they have met nearly thirty times altogether. Each was the other’s honored guest for the military parades held in Moscow and Beijing in 2015 to commemorate the end of World War II. The two autocratic leaders see eye-to-eye on a variety of international issues, their strategic interests align, and their governments consult regularly and coordinate closely. The two find considerable common cause in their mutual opposition to the United States, although Moscow is both more outspoken and more assertive in making life difficult for the U.S. The two regularly coordinate their positions in the United Nations Security Council and are not afraid to veto resolutions agreed to by the other P-5 members (U.S., UK, and France), particularly when it involves military intervention in third countries.

The considerable closeness between Moscow and Beijing has been, until recently, underappreciated in Washington and the West. But there is now increased awareness – and rising concern – about this partnership, particularly in Washington. Some observers of the relationship see it as temporarily tactical and expedient, and they predict that the residue of historical distrust will again emerge to pit the two Eurasian powers against each other. But this skeptical view is giving way to an emerging predominant consensus that the Beijing-Moscow axis is built on real commonalities, has a strong foundation, and a positive future.

Despite these commonalities and strategic coordination, there still remains an undercurrent of historical suspicion as well as contemporary irritants, notably on the Russian side. A subterranean debate simmers in policy circles in Moscow about China’s long-term intentions in Central Asia and whether China is manipulating Russia for its own strategic and development purposes.

Just as U.S.-China competition will be an indefinite feature in international relations over the coming decade(s), a China-Russia axis and strategic partnership to counter the United States and undermine the Western-led liberal order will similarly remain a core feature of global geopolitics. The “strategic triangle” may be returning, and it is tilted against the United States and the West.