Chinese President Xi Jinping’s state visit to the United States in late September was a crucial visit made at a crucial moment. 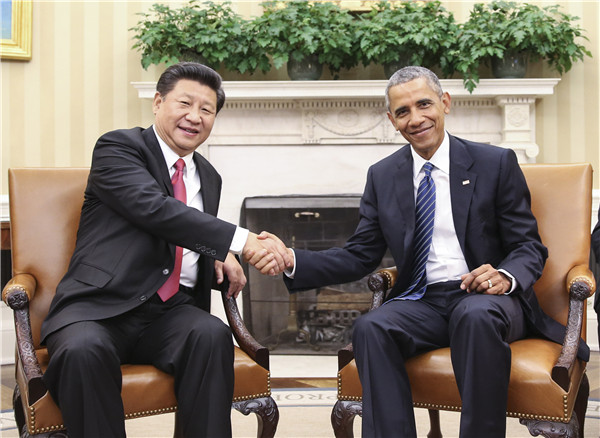 At that time, the U.S. was becoming overly worried about the pressure brought by China’s fast growth in the past 30-odd years, and found it difficult to interpret Beijing’s increasingly assertive diplomacy. It was such a critical moment that the Chinese head of state voluntarily delivered answers to those doubts and misgivings to the White House. Xi’s visit was aimed at removing obstacles in the development of Sino-U.S. relations and preventing the bilateral ties from falling into the Thucydides Trap of power conflict.

In most senses, that goal has been attained. Previously, China and the U.S. were far apart on the issues of maritime safety and cyber security. In the South China Sea, China bickered fiercely over American warships’ and aircraft’s reconnaissance moves, while the U.S. fretted over China’s construction projects on some islands and reefs. In terms of Internet safety, both countries are victims of cyber attacks, but differed on how they attributed the attacks on one another, and on how they could cooperate to prevent such attacks. The gap on this understanding even grew wider after the June 2013 Sunnylands summit between Xi and U.S. President Barack Obama. The Cyber Security Work Group both sides set up after the summit had not been able to work as planned.

These troubles were partly remedied during Xi’s latest visit.

At the Sunnylands summit, the two presidents reached a consensus on reducing the possibility of military accidents by enacting a system of to notify of major military operations ahead of time, and by establishing guidelines of behavior on naval and air military encounters. Later the two countries’ defense departments developed communication protocols and cooperation for establishing the two “mechanisms of mutual trust,” and clinched two memoranda of understanding on the mechanisms before the two presidents met for the Zhongnanhai, Beijing summit last November.

Prior to the latest summit in Washington DC, both countries signed a “military crisis notification” annex to the agreement on early notification of major military operations and an “air military encounter” annex to the behavior guidelines on naval and air military encounters. All these moves were the results of the virtuous interaction promoted by the three summits for enhancing mutual trust, avoiding misunderstanding, and preventing risks and crises in international air and maritime areas. With regard to China’s construction work on South China Sea islands and reefs, China told the U.S. during the latest summit that the moves were not targeted at any country.

China and the U.S. have been squabbling over the issue of cyber safety, with both sides being victims of cyber-attacks, yet blaming each other as the culprit. As the attacks are difficult to track, those accusations can hardly be verified, much less proven through cooperation. Former U.S. intelligence employee Edward Snowden exposed the facts of the National Security Agency exercising web monitoring over many other countries, triggering global condemnation of the U.S. Washington, however, repeatedly accused China, however unsubstantiated, for alleged cyber-attacks against the U.S. The Americans’ attitude made it difficult for the two countries to carry out effective cooperation on the issue.

At the latest summit, the Chinese side said that both online theft of commercial secrets and hacker attacks on government websites are criminal acts that should be cracked down according to law and relevant international conventions. Both sides made it clear that no country is allowed to commit, or intentionally support, theft of intellectual property including commercial secrets or other confidential commerce information. The two countries agreed to upgrade the Cyber Security Work Group set up two years ago to a high-level dialogue mechanism for cracking down on cyber crimes. They agreed to work together to formulate, and promote, national behavior guidelines for the international community in cyberspace. Both sides have made great efforts to better balance the need to allow each country’s IT technologies and products flowing into each other country and the need to protect each side’s national security.

China and the U.S. made a series of breakthroughs at the summit on “what not to do.” As they are of great importance to national interests, these breakthroughs could not be achieved at the staff level and had to be handled by the top leaders. Xi and Obama adopted a cooperative attitude on the above-mentioned issues based on the fundamental interests of the two nations as well as of the world at large. Having the overall interests in mind, the two presidents exercised mutual understanding and mutual accommodation in their talks, which helped remove a number of obstacles that had stood in the way of the development of bilateral relations. So long as the consensus reached in the latest summit can be effectively implemented, it can be predicted that the bilateral ties will meet with much fewer frictions.

On “what to do” for both countries, the two heads of state achieved even greater results, which included 49 cooperative projects. First of all, both sides reaffirmed the definition of their relationship. At the Sunnylands summit in June 2013, China raised the concept of “a new type of major-power relations between China and the U.S.” but the U.S. did not accept it right away. Washington remained doubtful about it until it became gradually positive when Obama expressed “appreciation” at the St Petersburg talks in September 2013, “agreement” at The Hague nuclear security summit in March 2014 and “joint promotion” at the Zhongnanhai, Beijing meeting in November 2014 with Xi. Against the recent assertions by certain critics that the Sino-U.S. relations have reached the “critical point,” both sides agreed at the latest summit to continue the joint effort for establishing a new type of major-power relations based on mutual respect and win-win cooperation.

With the establishment of a constructive framework for their bilateral relations, China and the U.S. need to bring real benefits to their people through cooperation. At the latest summit, both countries agreed to restart talks for the conclusion of a Bilateral Investment Treaty. This will help increase employment in both countries and promote common prosperity. The two countries made major policy commitment to respecting intellectual property and innovation. This will create a friendly environment for mutual investment and business cooperation. The previous “one hundred thousands plus ten thousands” plan of exchanging students will be upgraded to a three-year “fifty thousands plus fifty thousands” plan funded by China. And the student exchange will be extended to wider fields. China will buy more U.S.-made long-haul commercial airliners while the U.S. will invite China to help with its high-speed railway construction. Also, the two countries promised to cooperate to help Africa develop green energy sources. All these cooperative moves will bring immense benefits to both countries and the rest of the world.

It is hoped that these brilliant promises can be fulfilled. It is also expected that new contradictions will keep emerging between the two countries as cooperation deepens. The U.S. will try to maintain its status as the world’s sole superpower while cooperating with China. And China will try to attain its deserved status of global power, while making greater contributions to the world with its growing strength of capabilities. Competition and cooperation around these two “statuses” will go on and on. The question is how to make the competition and cooperation move in the right direction.