Globalization and Managing a Cooperative Rivalry

Many analysts argue that the US-China relationship is entering a new cold war. Indeed, the United States and China have begun a new phase in their relationship, but the cold war terminology is a misleading historical analogy. During the Cold War, the US and the Soviet Union targeted tens of thousands of nuclear weapons at each other and had virtually no trade or cultural ties. By contrast, China has a more limited nuclear force, annual Sino-American trade totals a half-trillion dollars, and more than 350,000 Chinese students and three million tourists are in the US each year. A better description of today’s bilateral relationship is “cooperative rivalry.”

How well can we manage it? Can we avoid a new cold war or worse?  The distinguished scholar Wang Jisi is correct in his concern about finding “bottoms” or “safety nets” for the deteriorating US-China relationship.  His concern about avoiding military conflict and maintaining social exchanges are important, but I would like to address the problem of how the two countries deal with economic and ecological globalization.

Many countries have valid complaints about Chinese economic behavior, such as the theft of intellectual property and subsidies to state-owned companies, which have tilted the playing field in trade. China has developed a hybrid system of public and private enterprises with a mercantilist approach, rather than an approach of open trade and investment. The Chinese Communist Party plays an important role in this, meaning that there are good security reasons for the United States and others to avoid becoming dependent on Chinese companies, such as Huawei or ZTE for 5G wireless telecommunications. After all, China has refused to allow Facebook or Google to operate within its Great Firewall for security reasons. But, it is one thing to restrict certain technologies and companies for security reasons and another to cause massive disruption of commercial supply chains in an effort to cause damage or develop political influence.

A degree of decoupling within supply chains and economies is bound to occur, particularly in areas related to technology that directly and indirectly affect national security. Naturally, both sides will wish to limit vulnerabilities that endanger critical infrastructure or have important implications for military postures. Some measures will be unilateral, such as those Beijing has been undertaking for more than a decade, as well as new US measures to restrict sensitive technology transfer via trade, investment, and scientific exchanges.

At the same time, intricate supply chains are not easily undone, and the effects can be costly for both countries. Bilateral and multilateral negotiations could help to prevent partial technological disengagement from degenerating into a stampede of tit-for-tat retaliation that leads to full protectionism. American and Chinese economists have suggested negotiating a framework for trade policy that distinguishes areas typically subjected to bilateral negotiations regarding reciprocity from those where countries are expected to undertake well-calibrated policy adjustments that minimize harm to its domestic economy or security. While some decoupling is inevitable, China and the US should negotiate a framework that sets such a “floor”.

While trade wars have set back economic globalization, environmental globalization, exemplified by pandemics and climate change, will continue to intensify because they obey the laws of biology and physics, not politics. In a world where borders are becoming more porous to everything, from drugs and illicit financial flows to infectious diseases and cyber terrorism, countries must use their soft power of attraction to develop networks and institutions that address the new threats. As technology expert Richard Danzig points out, “Pathogens, AI systems, computer viruses, and radiation that others may accidentally release could become as much our problem as theirs. Agreed reporting systems, shared controls, common contingency plans, norms, and treaties must be pursued as means of moderating our numerous mutual risks.” Tariffs and border walls cannot solve these problems.

On transnational ecological issues like COVID-19 and climate change, power becomes a positive-sum game. It is not enough to think of power over others; one must also consider power with others. On many transnational issues, empowering others helps a country accomplish its own goals. Neither China nor the US can solve the problems by itself.  Both can benefit if the other improves its energy efficiency or improves its public health system.

Leaders have a responsibility to put their country’s interests first, but the important moral question is how broadly or narrowly they choose to define those interests. Both China and the US responded to COVID-19 with an inclination toward short-term, zero-sum, competitive approaches, with too little attention paid to international cooperation. As I show in my new book, Do Morals Matter?, President Trump has interpreted “America First” too narrowly, stepping back from the long-term, enlightened self-interest that marked the post-1945 US approach designed by Franklin Delano Roosevelt, Harry Truman, and Dwight Eisenhower.

Cooperation, however, is possible between geopolitical and ideological rivals. For example, during the Cold War, the US and the Soviet Union both supported a United Nations program that eradicated smallpox worldwide. After the 2002-03 SARS epidemic, the US and China both established a web of cooperative relations between national health authorities, and they worked together to combat the 2014 Ebola outbreak in West Africa. Although the US and China differed at the UN meeting on climate change in Copenhagen in 2009, they were able to negotiate their differences and reach an agreement on the Paris Climate Accords in 2015. President Trump subsequently withdrew American participation, but in the future, it will be increasingly important to negotiate a framework that allows the strategic rivals to cooperate in coping with ecological globalization. 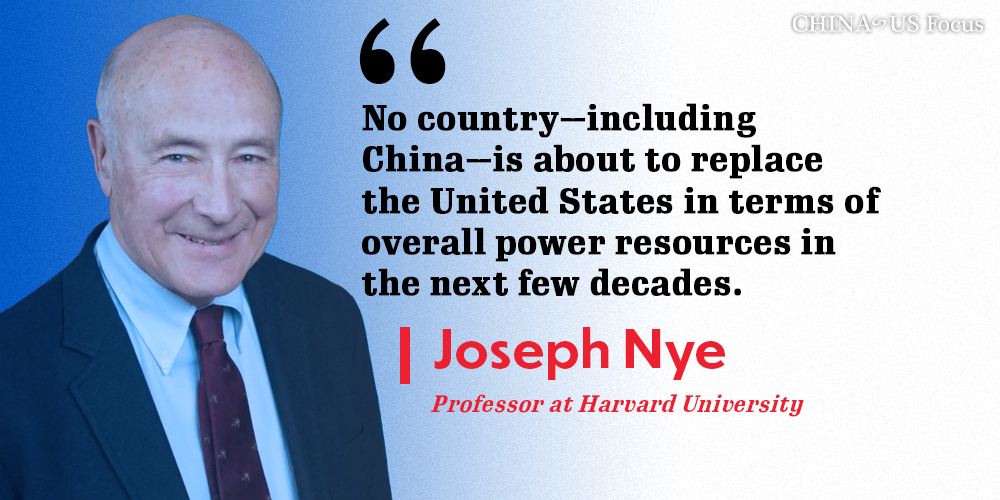 No country—including China—is about to replace the United States in terms of overall power resources in the next few decades. While the United States will continue to lead in production of global public goods, it will need to get comfortable with increasingly sharing that role with China. Since the Nixon administration, China and the United States have been able to cooperate despite ideological and geopolitical rivalry. As various forms of global interdependence has grown, efforts toward a total decoupling would involve enormous costs.

Rapid Asian economic growth has encouraged a power shift to the region, but Asia has its own internal balance of power. Chinese power is balanced by Japan, India, and Australia, among others. None want to be dominated by China, though none wish to see a Cold War-style containment strategy that would force them into an economic divorce from China, either. The United States will remain crucial to that Asian balance of power for years to come. If the United States maintains its alliances, the prospects are slight that China can drive the United States from the Western Pacific, much less dominate the world. The United States has high cards for managing the traditional competitive parts of our cooperative rivalry with China and does not need to sever the relationship by completely decoupling in a fit of panic.

The more difficult question for an effective strategy will be whether the United States and China can develop attitudes that allow them to cooperate in producing global public goods and managing interdependence while competing in other areas. Worst case analyses and predictions of a cold war make such a balanced policy difficult. The US-China relationship is a cooperative rivalry where a successful strategy will require management of both aspects at the same time.