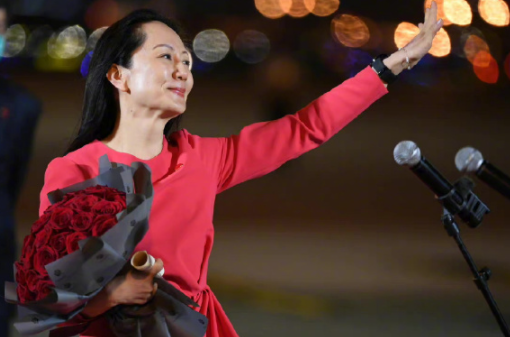 The digital technology dividends driven by globalization are being stripped away by a geopolitical game. A huge risk looms as the global technology ecosystem is distorted by politics. Cold War-style policies, including censorship, embargoes and lockdowns, are becoming buzzwords in the tech world.

Chinese and American tech firms have been dragged into the game, which culminated in the detention of Huawei’s Meng Wanzhou by Canada at the request of the United States. The incident not only dealt a serious blow to China-U.S. collaboration in the science and technology sector but also mothballed bilateral relations.

On Sept. 24, the U.S. Department of Justice entered into a deferred prosecution agreement with Meng, allowing her to leave Canada and return to China without pleading guilty. This likely represents the Biden administration’s revision of the tech cold war initiated by Donald Trump. Meanwhile, two Canadian citizens, Michael Kovrig and Michael Spavor, who had faced allegations of endangering China’s national security, were allowed to return to Canada.

The way the cases of Meng and the two Michaels concluded was not perfect, but it was a relief to all involved. This case has not only been a focus of the international community but has also erected walls between China, the U.S. and Canada, directly or indirectly affecting all aspects of the three countries’ relations.

The return of Meng and the two Michaels can be seen as a positive signal from China and the U.S. to their own people and to the international community. The friction between the two sides in science and technology will be reduced to some extent from confrontation to competition and cooperation.

However, there are also signs that some of the Trump administration’s misguided practices are continuing, including the Clean Network initiative that targets Chinese tech firms such as Huawei. The U.S. also joined forces with the European Union at their summit in June, setting up the Trade and Technology Council. This not only aims to strengthen bilateral cooperation in the high-tech field but also forms a ring of encirclement against China’s scientific and technological development.

Samm Sacks, a cyberpolicy fellow at think tank New America and a senior fellow at Yale Law School’s Paul Tsai China Center, proposed a “small yard, high fence” strategy for China-U.S. technology competition to address China’s challenges in a way that does not harm U.S. interests. He pointed to three criteria for circumscribing a small yard: significance of a technology to the military, lack of Chinese know-how regarding a technology and American leadership in the technology sector. In these areas, the U.S. should take more measures to strengthen its technology embargo against China, he said, but in some noncritical areas, it should loosen its grip.

It remains to be seen to what extent his approach will used as a policy framework or to overhaul the anti-globalization mindset and undifferentiated crackdown on China’s big tech firms that became prevalent during the Trump era. The possible impact on the U.S.-China game in the tech sector also remains undetermined. The size of the yard and height of the fence are key to the policy. To determine the boundaries of the yard, the U.S. needs a rational assessment of digital technologies and of U.S. relations with China in the sector.

First, tech firms are the key forces driving the development of digital technology and the digital economy. Governments often tout their presence and influence in terms of technology, yet they may not be at the forefront. In many cases, government policies are considered outdated and destructive, and their implementation is bound to be counterproductive. Therefore, respecting the choices of tech companies and avoiding excessive political interference is the key to restoring the science and technology ecosystem globally.

The development of digital technology is inseparable from globalization. A globalized innovation system and supply chain are essential for the success of tech companies. Any policy that goes against this trend carries long-term risks and uncertainties and is sure to bring huge losses to the companies. Most tech companies bet on both sides in order to deal with possible political interference, which increases their costs while not effectively addressing government concerns.

Second, China’s rise in digital technology is not another Sputnik crisis for the U.S. Global collaboration, and especially collaboration with the U.S., is key to China’s success in the sci-tech sector. While China has benefited greatly from this cooperation, so has the U.S. Therefore, a crackdown on China will have many negative consequences for U.S. companies and will create huge divisions.

Finally, there is a big difference between digital technology and traditional technology. Technological hypochondria was at the core of Trump’s policies, which were fueled by a combination of fear and geopolitical factors. The so-called national security exception has now become the national security norm. Over the past few years, the world has seen too many incidents of 99 percent assurance being negated by 1 percent of perceived risk. Such policies should not be supported.

Any government act targeting a particular tech company will severely damage that government's credibility. Even on grounds of national security, such policies remain unconvincing. Governments should enhance their regulatory capabilities, establish a sound security ecosystem and collaborate with the rest of the world to safeguard national security. They should give up any sort of Cold War mindset and say no to censorship, embargos and blockades.

The return of Meng and the two Michaels presents an excellent opportunity to restore mutual trust between China and the U.S. in the sci-tech sector. We hope that the two sides will take the initiative to cooperate more in the future to consistently alleviate the instability and escalating tensions caused by competition.