A historic agreement was reached between Iran and Britain, China, France, Germany, Russia and the United States (“P5+1”) over the Iranian nuclear issue on July 14. A week later, President Xi Jinping and U.S. President Barack Obama highlighted their nations’ cooperation in resolving the Iranian nuclear issue, which may herald a new way of doing business on the stage of global politics.

President Obama appreciated China’s contribution to the historic agreement, praising China for its very important role in the process. The Chinese president pointed out that China and the United States had close communication and coordination during the talks – testimony to the two nations’ decision to jointly build a New Model of Major Country Relationship (NMMCR). Indeed, China put its interaction with the United States over and related to the Middle East affairs within the NMMCR framework. 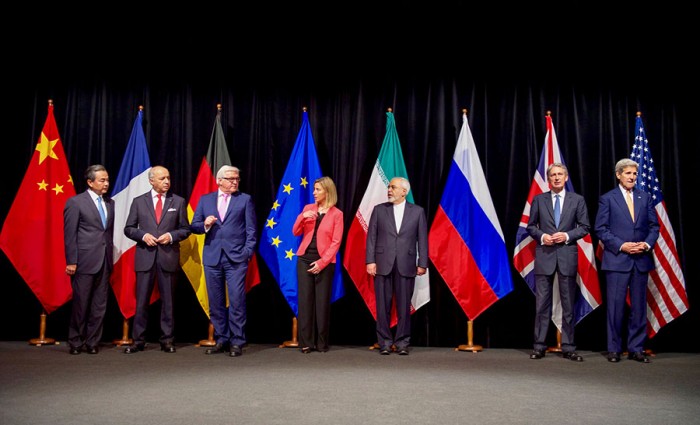 The new relationship model was endorsed by both presidents during their informal summit at Sunnylands, California in June 2013. Over the past two years and more, the NMMCR has been reflected in some encouraging developments in the China-U.S. interactions over and related to the Middle East affairs.

First of all, China and the United States have more constructive interaction in the Middle East than in some other regions of the world. The two countries have overlapping interests in maintaining peace and stability of the whole region in general and the Gulf sub-region in particular: managing the Iranian nuclear issue, continuing the Palestine -Israel peace process, safeguarding vital energy supply lines and supporting orderly and peaceful transitions of political, social and economic systems in the countries concerned.

Moreover, both countries are facing intensified challenges of international terrorism and extremism given their trends towards re-groupings, so-called state building and the accompanying wars and violence. However, international terrorism is not an isolated phenomenon and is closely related to economic poverty and social stagnation, which create hotbeds for radical ideologies and extremist movements. China and the United States have realized the seriousness and damage that terrorism and extremism could bring to the region as well as the world. There has been increasing awareness from both countries to combine efforts in tackling both the root causes and symptoms.

Furthermore, the two countries cooperate with other major actors on Middle East hotspot issues. China maintains good relations with almost all the regional countries. The United States is the most important player in the region, but China and the United States together with the EU and Russia succeeded in averting a war over the Syrian chemical weapons issue. Because of the U.S.-Russia confrontations resulting from the Ukraine Crisis, China played an even more important role in facilitating the Iranian nuclear issue negotiations, thus not only creating more conducive conditions for the overall improvement of the Gulf Region but also the global non-proliferation efforts.

Last but not least, China and the United States conduct regular consultations on Middle East affairs and building institutions there. According to relevant arrangements of the fourth round of the China-U.S. Strategic & Economic Dialogue, the two countries started the process of Consultations on Middle East Affairs at Vice Foreign Minister Level in August 2012. Moreover, China became a proactive part of the “P5+1” and played an indispensible role in the Iranian nuclear issue negotiation. This mechanism looks likely to evolve into a more regular one in the years to come.

However, one should not overlook the difficulties and challenges in the China-U.S interaction over, and related to, Middle East affairs. First, China and the United States have different, sometimes even colliding philosophical and guiding principles. China has kept to the principle of non-interference in internal affairs, especially in face of the sudden and drastic changes in the so-called Arab Spring. The United States has stressed its leadership and responsibilities to protect. The two countries differed in their policies in the Second Iraq War, Libya War and the ongoing Syria Civil War.

Second, the two countries differ in their strategic weights and strategic goals related to the Middle East. So far, the United States is the most important outside player with political, economic and military leverages, trying hard to maintain its dominant position of international involvement. China’s strategic goals and actual influence are much smaller and greatly restrained by its limited strength. Therefore, the two countries are actually asymmetrical in their interaction in the Middle East, and their different attitudes and polices are natural and expected.

Third, both countries have their own pressures to readjust respective strategies and polices concerning the Middle East. The United States has the dual-difficulties of winding down its involvement in the Middle East and maintaining a balance among different geopolitical priorities. It also has to consider the extent by which China can play a greater role without damaging vital US interests. For instance, the United States is very much concerned about China’s increasing political and military presence in the region and on the maritime routes. China is in a dilemma, too. China’s stake in the Middle East has risen in recent decades, propelling Beijing to play a greater role and assume more responsibilities. However, a greater amount of military responsibility would require for China to change its strategic thinking and actual policies dramatically, and even drastically. Besides, there is a big gap between China’s real capabilities and the expectations from the countries concerned.

Therefore, China needs to gradually readjust its Middle East strategies and policies while moving toward becoming a global power.Mainly, China has four strategic goals towards the Middle East as a whole: maintaining regional peace and stability, promoting energy and non-energy cooperation, enhancing cultural interchanges and people-to-people relations, and striving for more synergy with other major powers, the United States in particular.

For future interaction involving Middle East affairs, both China and the United States must work together for more strategic consultation, policy coordination over the hotspot issues, and economic cooperation with third parties as both find ways to manage political and ideological differences. Moreover, “the devil is in the details”. Both China and the United States need to further outline and implement their cooperation in ensuring the safety and security of the sea lanes, meeting the challenges from terrorists and extremists, working with key regional countries such as Egypt, Saudi Arabia, Turkey and Iran, and working together on China’s Silk-Road initiative (“Belt & Road).

All in all, the Iranian Nuclear Issue Agreement should encourage both China and the United States to redouble efforts to flesh out the NMMCR through more effective cooperation in Middle East affairs for the benefit of themselves as well as the region and the world as a whole.