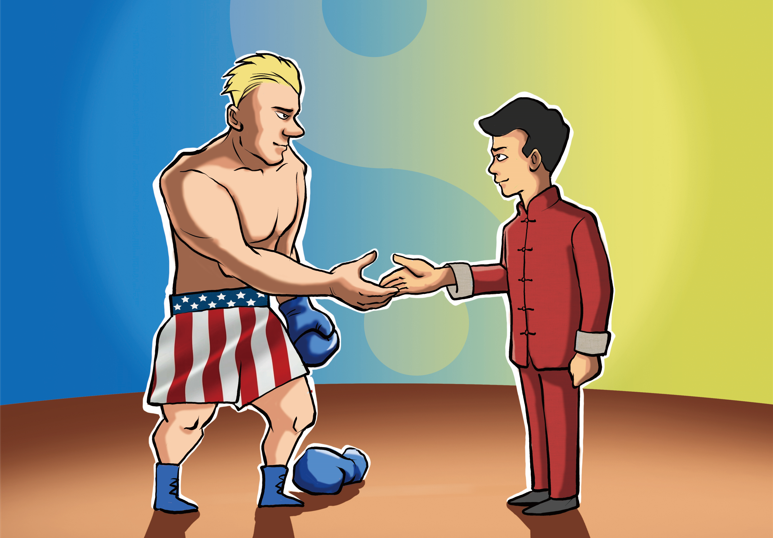 In the recent virtual meeting with Chinese President Xi Jinping, U.S. President Joe Biden said the U.S. does not seek to change the Chinese system — a statement repeated by National Security Adviser Jake Sullivan and others. It's an important part of U.S. quest for a phased de-escalation of U.S.-China tension, but it also merits close attention in its own right, bearing in mind the complex nature of U.S.-China competition over the long term.

“Not seeking to change the Chinese system” is another important policy adjustment after the U.S. abandoned its so-called engagement policy. Since the normalization of U.S.-China relations, the primary logic underpinning the U.S. approach has long been “changing China through engagement.” Under Donald Trump, the U.S. strategic community arrived at the prevailing view that the engagement policy had failed and replaced it with a strategy defined by competition.

The Biden administration generally inherited Trump’s policy shift, and even made further interpretations along the same lines. For example, Sullivan asserted at the Brookings Institution and on other occasions that it was not the policy goal of the Biden administration to fundamentally transform the Chinese system. Rather, the goal of U.S. policy toward China was to create an "environment in which the two powers can operate in the international system.”

This suggests the Biden administration has not only turned away from the strategic approach of engagement with China but also the strategic goal of changing China. It’s a fundamental reversal of U.S. policy toward China over four decades.

In essence, the U.S. policy shift is driven by two main factors:

First, China has become more proactive against the U.S. in recent years, which has led the U.S. to reckon that it is beyond its ability to change China. Since the start of the Trump administration, the U.S. has resorted to trade wars, technology wars and political wars, among other tactics in an attempt to force China to make concessions to the U.S. and to contain China’s rise.

But China has not only stood up against U.S. pressure but has steadily advanced its established policy guidelines and thrived in its national development. It has also gained experience and confidence in the intense competition with the United States and has taken a more proactive role in shaping China-U.S. relations. Through the course of high-level dialogues since Biden took office, China has been “pursuing diplomacy on equal footing” and proposed two lists and three bottom lines to the United States, including the basic principle that the United States must not challenge, defame or even attempt to subvert the socialist path and system with Chinese characteristics.

Considering that the gap between the U.S. and a stronger China has narrowed, the statement that Washington does not seek to change Chinese system is a necessary response.

Second, the U.S. statement is largely meant to ease tensions in bilateral ties. Relations have been in a downward spiral as a result of the Biden administration’s policy of containing China and the continuous U.S. provocations related to Taiwan — a bottom-line issue for China. In response, China has faced down U.S. provocations relentlessly to defend its national interests.

The Biden administration has gradually come to see the peril of continued deterioration in U.S.-China relations, and therefore intends to prevent a meltdown while pressing ahead with comprehensive containment. To this end, Biden has clarified the policy of “not seeking to change the Chinese system” in hope of maneuvering a detente as part of its strategic crisis management and set the stage for summit meetings and the resumption of communication in various fields.

The easing of U.S.-China relations will undoubtedly help the Biden administration focus on domestic issues, prepare for the 2022 midterm elections and seek China’s cooperation on issues such as curbing inflation, stabilizing supply chains and implementing a new climate policy. It is clear that the statement arises out of a strong desire to serve Biden’s domestic political agenda.

It is important to note that while the statement about “not seeking to change the Chinese system” does have some positive implications, it is still too early to tell whether it represents a long-term shift in the U.S. policy trajectory or is merely a tactical plot by the Biden administration. In particular, the Republican Party is not on board with Biden administration’s detente with China, and voices clamoring for fundamental subversion of the Chinese system are not a rarity.

More important, whether or not the statement indicates the prospect of a changed approach to pressure China remains to be seen. It has been a longtime tactic used by the U.S. to show a velvet hand but punch with an iron fist from behind.

Sullivan’s statement at Brookings suggests that the U.S. intends to focus on creating an international system that isolates China and indirectly forces China to make changes through systemic pressure. A series of major U.S. policy announcements already bear this out, including the upcoming Summit for Democracy in December, the Indo-Pacific economic framework in the making and the domestic infrastructure rebuilding initiative. With the National Security Strategy, National Defense Strategy and other important documents to be released at the end of this year and early next year, a new wave of offensives against China may be just around the corner.