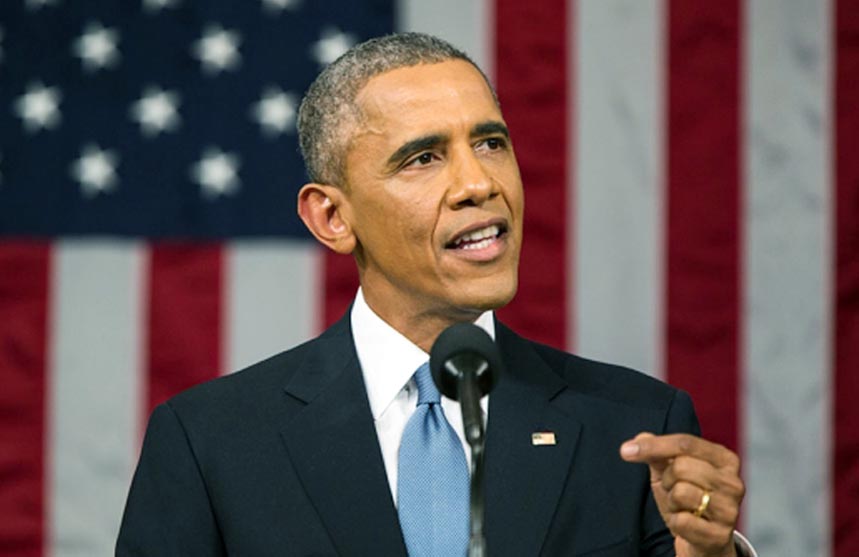 By not highlighting U.S. security disagreements with Beijing in the same way that he addressed Washington’s differences with Moscow in his January 20 State of the Union address, U.S. President Barack Obama communicated by omission his belief that U.S. security relations with China are proceeding satisfactory, at least in general. In this sense, he reflects the general American belief that relations with China are a manageable admixture of cooperation and competition.

As noted in the Chinese media and elsewhere, Obama’s most explicit mention of China came in a warning to Congress to back his trade policies in East Asia: he declared that U.S. businesses “need to sell more American products overseas … But as we speak, China wants to write the rules for the world’s fastest-growing region. That would put our workers and businesses at a disadvantage.” However, the United States does not need to stand by and watch this happen, but instead “we should write those rules” by giving him more trade promotion authority and other support for his Trans-Pacific Partnership, which would at least initially exclude China.

In earlier State of the Union speeches, Obama used a similar tactic of trying to secure congressional backing for his domestic policies–such as more federal funding for education and infrastructure–by citing the need to match the Chinese government’s large investment in these areas. His reference in last week’s speech to encouraging the return of manufacturing jobs from China to the United States through freer trade was a defense of his economic policies rather than an attack on China.

Conversely, Obama’s boasting of his “historic” November 2014 deal with Beijing to cut carbon emissions by the end of next decade was an example of the mutual advantages that are attainable when Beijing embraces U.S.-supported global norms. The President has emphasized elsewhere that the United States needs China’s cooperation to pursue its international agenda since on many important issues Washington cannot achieve its goals by itself.

Time limits and the need for audience attention were likely the only reasons that Obama refrained from noting how China and the United States could collaborate to prevent nuclear proliferation, fight terrorism, bring peace to Afghanistan, or, as pointed out in an earlier article by Dong Chunling and Sun Chenghao of the China Institutes of Contemporary International Relations, jointly address Ebola and other health emergencies.

A January 22 Huanqiu article claimed that Obama had an “hegemonic attitude” in presuming that it was a U.S. responsibility to “lead the world”, but such U.S. global leadership has been demanded by many of the world’s governments, including China. Indeed, in Beijing last December I frequently heard the complaint that the United States was failing to provide adequate global goods such as security and free trade, to the detriment of all countries. And in his speech Obama still stuck to his “lead from behind” rhetoric in emphasizing several times how his administration shunned unilateralism and strived to work through coalitions in defense of collective security.

Obama was softer on China this year than in some of his earlier speeches. He avoided explicitly mentioning such sources of tension as alleged Chinese cyber stealing of U.S. commercial and military secrets, the growing U.S. security ties with Japan and India, American concerns about Beijing’s assertive maritime territorial claims, China’s close ties with Iran and North Korea, and even the president’s misunderstood Asia Pivot, which many in Beijing mistakenly see as designed to contain China’s rise. However, Obama’s observation that, “in the Asia-Pacific, we are modernizing alliances while making sure that other nations play by the rules in how they trade, how they resolve maritime disputes, [and] how they participate in meeting common international challenges like nonproliferation and disaster relief,” applies at least indirectly to China.

Restructuring U.S. security ties with Japan, South Korea, the Philippines, and Australia has been a core tenet of the Asia Pivot from the beginning. Initially, this overhaul mainly involved basing and other traditional military issues, but recently the focus of alliance restructuring has expanded to encompass more joint action on disaster relief, cyber security, and other transnational threats. For example, Washington has encouraged Tokyo to reinterpret Japan’s constitution and thereby increase the ability of the Japanese Self-Defense Forces to participate in regional security missions, though Japan still cannot even consider launching a hostage rescue attempt in distant Iraq.

Furthermore, Obama’s references to maritime disputes were directed at the low-level conflicts in the South China Sea, while his calls for upholding nonproliferation and humanitarian norms could apply to Beijing’s reluctance to press Tehran and Pyongyang harder on its nuclear and human rights policies.

Many members of Congress would likely agree on the importance of these goals, though they would differ on the effectiveness of U.S. policies in securing Chinese support for the initiatives. Obama could credibly cite progress regarding each objective in the last few years while critics could justifiably point to continuing gaps between U.S. objectives and Chinese policies.

That said, the focus of Obama’s State of the Union speech was on U.S. domestic affairs, particularly the recovery of the American economy, and short discourse on foreign affairs concentrated on the Middle East. Furthermore, unlike in his discussion of trade, there was no explicit call to action in his security references directed at Congress. Obama likewise avoided trumpeting a “China threat” as a prop to rally the members behind more defense spending or the passage of long-stalled cyber security legislation.