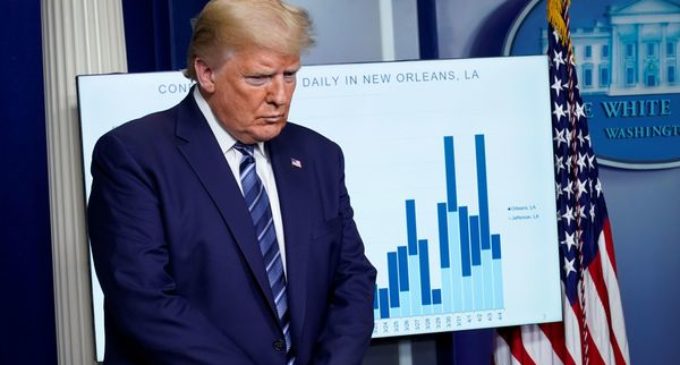 The first known case was found in Wuhan, China around mid-November 2019. Then it spread rapidly in Wuhan, and the infections were found in other parts of China and other countries. On December 15th China officially informed the World Health Organization (WHO) of the mysterious infections. Infection was found in Thailand on 1/13, Japan on 1/16, South Korea on 1/20, and the U.S. on 1/21. At the same time, media reporting of this new infection was reported in China and throughout the world – the New York Times already had an article on 1/6. The current belief is that the infection originated from China, but as reported in the NYT the majority of cases in New York might have come from Europe.

On 1/11, Chinese scientists posted the genome of the mysterious new virus (now known as COVID-19). This led to WHO developing a template for preparing tests shortly after.  Many countries have since developed tests using the Chinese genome information and the WHO template. For example, within a week, virologists in Berlin had produced the first diagnostic test for the disease, and S. Korea has used the WHO template to provide free testing to tens of thousands of people per day since the middle of February.

As the number of infections and deaths climbed, WHO declared on 1/30 COVID-19 a global emergency, and on 3/11 a pandemic.  By that time however, in a few countries like China and S. Korea, the situation seemed to be stabilizing and improving, including a significant reduction in the number of new infections and the increase in the number of recovered cases. A major reason for this improvement is that testing became widely available in these countries, thus helping to identify places to apply measures to minimize such infections.

Spread of the Infection to the U.S. and President Trump’s Position and Response

The first infection in the U.S. occurred on 1/21, one day after the first infection in S. Korea. President Trump has repeatedly been asked about this new coronavirus outbreak. At the World Economic Forum in Davos, Switzerland on 1/22, he was asked, “Are there worries about a pandemic at this point?” He was dismissive of the question, claiming that the situation was “under control” and was “going to be just fine.”

Over the following 6-7 weeks, he repeatedly said that the problem was not serious, claimed the problem would disappear by itself, gave out false claims – or at best half-truths – and blamed others, including the former Obama administration. He claimed on multiple occasions that test kits would be available to anyone who wanted one, but the reality was that test kits were in very limited supply, and they only became available around mid-March. Furthermore, even now, tests are far from being widely available and in the quantity sufficient enough to meet the overwhelming demand.

The first test kit from the U.S. Center for Disease Control and Prevention (CDC) did not use the WHO template and did not work. However, as discussed earlier test kits based on the WHO template from other countries such as S. Korea and Germany worked.

The Trump administration basically wasted almost two months’ time to undertake various preventive measures that would have prepared the U.S. to reduce the spread of infection. The only useful action that Trump took during this period was the 1/31 restriction on travel to and from China. This was definitely not enough, and he could have done much more. Furthermore, the U.S. National Center for Medical Intelligence actually warned the White House as early as late November about the magnitude and significance of the emergent infectious disease.

As the number of COVID-19 infections and deaths continued to rise rapidly in the U.S., the whole country was cancelling large gatherings, including college classes and professional sports. Simultaneously, the stock market saw extreme declines starting on 2/21. Finally, on 3/11 in a nationwide broadcast, President Trump acknowledged for the first time the seriousness of the coronavirus situation and that the problem was not going away anytime soon. Yet, in his speech there was no guidance on how to mitigate this important issue, aside from additional travel restrictions to and from Europe. As usual, he made many half-truth statements and demonstrated once again he is far from on top of the issue. The stock market crashed on 3/12, with a 10% drop in the DJIA, the worst drop since 1987.

He imitated such a performance on additional nationwide addresses on 3/13 and 3/16. and the stock market continued to drop significantly.  As unemployment skyrocketed in an unprecedented manner, Congress passed the obviously bi-partisan $2 trillion+ financial aid package for taxpayers and businesses.  However, in a bill-signing ceremony, Trump made it a completely partisan event.

In order to keep infection and death rates from continue to rise rapidly, various state and local government leaders impose additional restrictions on gatherings, shut down of non-essential businesses, requirement to wear face masks, etc.  At the same time, they are also preparing, mobilizing, and augmenting hospitals to provide enough beds and with sufficient personal protective equipment (PPE) and life-saving machines like ventilators, as well as the necessary medical personnel.

This is when the country needs the President to declare the Defense Production Act (DPA) to require certain companies to mobilize and produce products necessary for the defense of our country, and also utilize FEMA (Federal Emergency Management Agency) to coordinate with the suppliers to provide the necessary equipment to state and local governments so they don’t compete with each other and with FEMA to purchase products like ventilators at normal prices.  In spite of the requests for such actions from multiple state governors and other leaders, the federal government still doesn’t have its act together.

In the 2014 edition of the document “Crisis Emergency Risk Communication”, first published by the CDC during George W. Bush’s presidency (2001-2008), it is stated on page 2 that six principles should be emphasized in communication during a crisis:

Unfortunately, President Trump during the coronavirus crisis has exhibited the opposite of these six principles:

The previous section has clearly shown that President Trump has completely mismanaged the whole coronavirus crisis; he has repeatedly lied and dispatched completely false information and half-truths; he does not understand the problem; and he doesn’t allow the appropriate and knowledgeable people to manage the crisis. He has completely underestimated and wasted several weeks of valuable time attacking the problem.

This kind of behavior has been typical of President Trump throughout his whole presidency. He has always lied, provided no legitimate reasons for his deeds and words, attacked and made fun of other people – showing no compassion or understanding of other people’s circumstances – and he often does not take actions to try to solve problems in a timely manner, if at all. Yet, it seems that he remains popular to a portion of the American public. It doesn’t seem that in the past he has lost a lot of his popularity. Is it different now?

Yes, it is different with the coronavirus emergency. In the past, his deeds and words did not sway the people loyal to him, at least not in the short-term.

However, in the current coronavirus crisis, everyone’s health and life are being affected drastically. Society as a whole has shut down. So many people are unemployed, and savings and assets evaporated with the crashing stock market. In addition, the government is so heavily in debt due to massive relief programs and great reductions in income from taxes, putting all future generations at risk.

Anyone, including the Trump loyalists, can see the adverse impacts of this crisis on themselves. Even the wealthy people, including the top 1-2%, can see their wealth diminishing rapidly. Perhaps sooner or later, even the Republican political leaders at the federal, state, and local levels may decide that blindly following Trump may not be good for their own political careers.

This change in mood and assessment of President Trump may already be reflected in the recent Democratic primary election. A large number of Democratic presidential candidates have quickly coalesced behind former Vice President Joe Biden. They see that the country has an urgent need to get rid of President Trump, and they don’t want to delay the choice of a Democratic presidential candidate until the Democratic Party Convention in July and want to have a head start for the campaign. Similarly, there has been an overwhelming surge in votes for Biden within a matter of a few days or 2-3 weeks. Getting rid of Trump has become the most urgent objective for many people.  People see that our country and the world cannot afford another four years under the mismanagement of Trump.

Of course, this was for the Democratic Party. We won’t know until the election in November whether this attitude will be pervasive across the whole country.

The U.S. is definitely not the same as five months ago.  The coronavirus health issue has by no means been put under control.  Hundreds of thousands of people may still lose our lives.  Even when the health problem is under control, we have to rebuild our economy and allow ordinary citizens to stand on their feet, and to pay off the trillions of debts incurred by our government.  Furthermore, we need to work together with the rest of the world to address strategic issues like pandemics, climate change, world hunger, war and peace that threaten the survival of mankind.

COVID-19U.S. Economy
printTweet
You might also like
Back to Top
CHINA US Focus 2022 China-United States Exchange Foundation. All rights reserved.