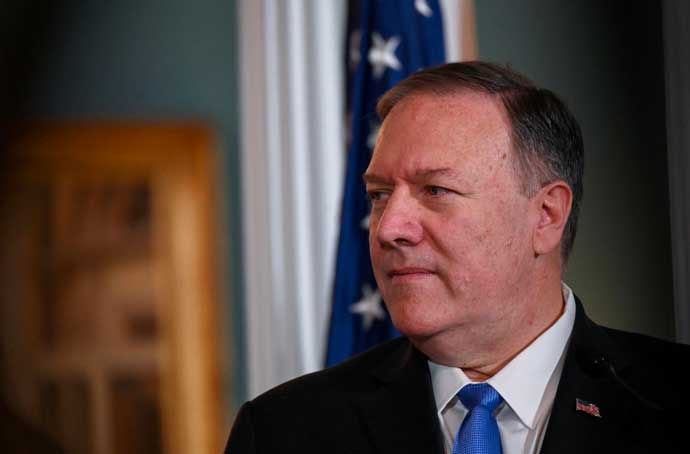 The United States government has been blaming China since the outbreak of the COVID-19 pandemic, with U.S. Secretary of State Mike Pompeo at the forefront of the smear campaign. He has been more forcefully criticizing China after the large-scale upsurge of the pandemic in the U.S., and has more recently aimed his attacks at the World Health Organization.

Pompeo’s criticism of China and the WHO is focused on three aspects: first, that the Chinese side created the virus; second, that the Chinese side concealed information about epidemic situation at home; and, third, that the WHO, which relies heavily on U.S. financing, speaks on China’s behalf, and cooperated with Beijing in concealing the epidemic in China in the early days of the outbreak, all of which have wreaked devastating havoc on the world.

If Pompeo were telling the truth, China and the WHO indeed need to do some self-reflection. But if one scrutinizes the information about the outbreak released by China, the U.S., WHO and other countries and regions thus far, one finds that China frequently communicated with the WHO and U.S. at an early stage. The Chinese Foreign Ministry said that from Jan. 3 to Feb. 3 alone, the Chinese side gave notice to the U.S. 30 times.

Pompeo may blame China for not being detailed enough about the information it offered, but he cannot truthfully say that China did not share information as early as possible. If the U.S. believes China hasn’t been truthful, it should offer evidence, and present the information it holds about the “true situation” of the epidemic in China at the time, while openly comparing it with the original record of what China had shared. In this way it could support Washington’s claim that Beijing was unfaithful.

Does Pompeo have such information about what he insists is the “true situation” in China? Perhaps he doesn’t believe the Chinese government’s own releases, which is understandable, as China is a stakeholder. One naturally tends to be more willing to trust “objective” information provided by a “fair” non-stakeholding third party.

United Nations Secretary-General Antonio Guterres said recently that the UN would launch an investigation into the origin of the virus after the pandemic — which is, perhaps, a proposal that most countries, including China and the U.S., can’t refuse. It a UN investigation takes place, some U.S. citizens might be invited to go to China to participate as members of a UN panel, and some Chinese citizens might also join similar probes in the U.S. The results of such an inquiry may be most convincing.

Since the pandemic is far from disappearing worldwide, however, the generous proposal has yet to be put on the agenda for UN deliberation. Even if a UN investigation is endorsed in principle, it will have to wait until the end of the pandemic. For the time being, Pompeo has presented no credible evidence. Is the information he purports to have? Was his evidence obtained via U.S. intelligence agencies’ secretive operations in China? Can such so-called evidence be put on the table to back up his finger-pointing at another country?

We haven’t forgotten, in fact, the 1993 Yinhe incident in which the U.S. claimed the Chinese cargo freighter was carrying chemical weapons precursors to Iran. The U.S. charge against China, using “ironclad” evidence from intelligence apparatus, ultimately embarrassed then-president Bill Clinton. The U.S. had to admit the charge was false, though it never apologized. Pompeo himself arose from the intelligence community. As a latecomer, is he simply unaware of the lesson?

Pompeo may not trust information about the epidemic that the Chinese government has released, but he must not base his China-bashing on his own fantasies or assumptions before a UN investigation even starts. It’s not that he cannot fancy any notion he likes, including that China created the novel coronavirus, but before this charge is proved with solid facts, it remains mere speculation.

Only scientists are fully capable of tracing the virus to its source, and only an unbiased investigation is likely to approach the truth. America’s top diplomat abusively blaming another country without evidence only downgrades U.S. credibility.

Even before finding out what actually happened in China, Pompeo vented against the WHO. If the U.S. doesn’t trust the Chinese notices to the WHO, and believes the WHO somehow colluded with China to hide information, then what are the facts it has found? If the U.S. already has solid evidence, then why have some members of the U.S. Congress asked the WHO to provide related documents by a deadline?

The U.S. should be rational about its rhetoric, as it would be improper for it, as a UN member, to investigate a UN institution. The right thing to do is to let the UN itself judge whether or not one of its second-tier organizations has operated properly.

There is no need for the world to worry about the White House decision to suspend financing for the WHO, and possibly never provide financial support in the future. After all, neither the secretary of state nor the U.S. president has the power to dictate everything. Bill Gates said it takes less time for him to write a check than for the U.S. government to suspend all financial support for the WHO. And that doesn’t account for other nations’ voluntarily contributions to fill any gap the U.S. may leave behind.

Let’s get back to what Guterres said, that solidarity is the current priority in the face of the pandemic, but an investigation afterward will be conducive to preventing future disasters. Pompeo should be more sensible when making future remarks, demonstrating the stringent logical skills he should have mastered as an intelligence chief.  It would be prudent and constructive for him, as America’s chief diplomat, to plant more flowers than thorns.