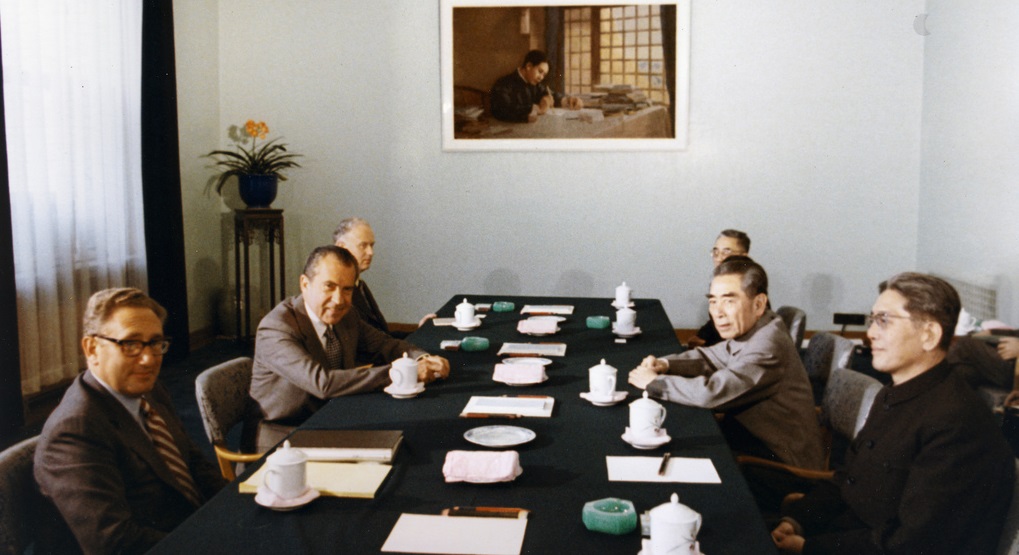 The administration of U.S. President Donald Trump is trying to reverse the China policies pursued by all previous administrations since that of Richard Nixon, who made his historic visit to China in 1972.

Only a few of Trump’s hard-line policymakers believe that U.S. policies toward China over the past 45 years were wrong. Those policies helped make China better off and transformed it into a strong rival. They neither changed China into a junior partner in the U.S. political and economic systems nor caused it to adopt U.S. values through peaceful evolution and engagement.

The Trump administration has determined that China is the only country that is rising to challenge the U.S. and possibly take its place as the dominant global power in the next 20 or 30 years. Hence, to hold China down in every possible way and sabotage Sino-U.S. relations in an unprecedented manner have become the prominent features of America's China policy.

The U.S. has undermined the normal bilateral diplomatic mechanism of cooperation by ordering the closure of the Chinese consulate in Houston, thereby restricting diplomats’ friendly activities of exchanges and cooperation. Moving toward economic nationalism, the U.S. has waged a long-term trade war against China and discriminated against Chinese investments in the U.S. by damaging global supply chains for Chinese chipmakers and smartphone manufacturers. It has been trying hard to downsize existing bilateral exchanges in the areas of culture, education, journalism, military affairs, anti-terrorism and global affairs, rather than expanding them or looking for new cooperative programs.

It is astonishing to witness the escalation of its interference in China’s internal affairs under the pretext of human rights, including issues concerning the effective governance of Xinjiang, Hong Kong and the South China Sea. It has stepped up its arms sales to Taiwan and brazenly upgraded its military and official contacts and exchanges with Taiwan, infringing on China’s sovereignty.

Top U.S. diplomats and senior officials have tried hard to demonize China on international occasions by spreading rumors and unleashing groundless attacks on China’s suppression of the COVID-19 pandemic in cooperation with other countries. They are trying to make China a scapegoat for their own failure to control the pandemic and for shameless election politics.

The slanderous words and destructive deeds against China over the past two or three years by the Trump administration have proved unpopular, self-defeating and dangerous. American businesses, like Chinese ones, have suffered and become unhappy with the administration’s tariff policies. About 3,500 U.S. companies sued the administration in late September, demanding a reduction of high tariff on imports from China.

Tens of millions of WeChat and TikTok users, especially young people, are firmly against the administration’s unreasonable ban of these tools. (The ban is temporarily on hold under a federal judge’s recent ruling).

U.S. businesses have defied administration warnings or advice to leave China. Instead, U.S. investment in China has increased 6 percent in the first half of 2020. The administration’s unilateral protectionist trade policies have contributed nothing to the reduction of the trade deficit. In August the trade deficit for U.S. commodities and services reached $67.1 billion, the highest since 2006. Most estimates show dim U.S. economic prospects. Its economy is expected to shrink 3 percent to 4 percent or more in the wake of the pandemic.

According to an estimate by the Congressional Budget Office, in fiscal year 2020, which ended on Sept. 30, the U.S. deficit hit $3.13 trillion, or 15.2 percent of GDP. The U.S. federal budget is on an unsustainable path. But even as the U.S. has begun to suffer from its anti-China policies, its credibility has also plunged.

Nationalist U.S. economic policies and actions have disrupted the normal functioning of the World Trade Organization and done great damages to the world trade order. The reckless anti-China activities of the Trump administration have produced dangerous signs of world division and now pose a serious threat to world peace, stability and prosperity.

It is self-evident that the Trump administration has overestimated its strength in setting up policy goals to change China.That reflects its poor basic knowledge of China, a great country with a brilliant civilization of 5,000 years. The Chinese people are industrious and intelligent, and the country had been a leading power in economic and scientific development for more than a thousand years before the birth the U.S. Since the founding of the People’s Republic of China in 1949, China has followed a successful path of rejuvenation. Its historic rise is inevitable, and neither the Trump administration nor any other forces in the world can prevent it.

The Trump administration’s extremely vicious sanctions and blockade against China might cause some difficulties for Chinese businesses and scientists in the short run. Yet, many Chinese businesspeople and scientists are grateful for Trump. His extremely harsh anti-China actions have helped them make up their minds to rely on themselves and give up the idea of renting or purchasing certain U.S. software and machinery. Once China has made a breakthrough in chipmaking and other scientific research programs in the next few years, U.S.-related products will lose essential markets. Then U.S. businesses and high-tech companies will just have to suffer as a result of the Trump administration’s misguided China policies.

As the U.S. presidential election approaches, it has become more and more clear that no matter who becomes the next president, a friendly and cooperative China policy should be his only choice, for confrontation between China and the U.S. produces no winners.