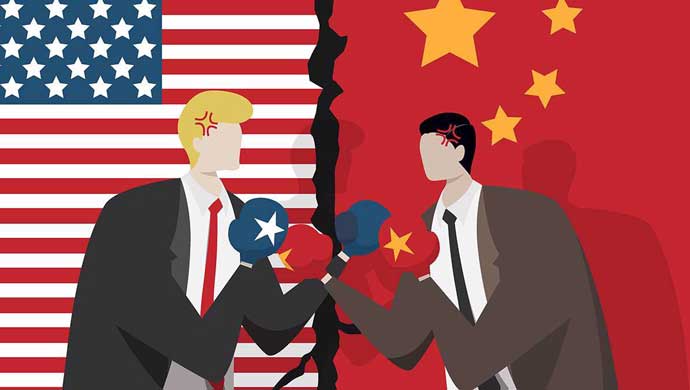 China-U.S. relations have plunged to an unprecedented low across four decades of diplomacy. They continue to interact and to aggravate the classic “action-response-reaction” cycle. One can assume the worst is yet to come.

Given this unfavorable context, more attention should be paid to changes in the following aspects of China-U.S. relations:

• A strategic consensus has been reached within the U.S.

Since 2019, President Donald Trump and his administration has increasingly mobilized the country to build a consensus for a firmer, more effective containment policy toward China. The frictions between the two powers during the COVID-19 outbreak have emphatically accelerated this process and have even resulted in mobilization accomplished in advance.

Two driving forces led to this outcome. One is the fear of China’s outstanding performance and rising national strength in development, values and leadership; the other is dissatisfaction with the alleged “infringement,” “theft” and “fraud” perpetuated by some Chinese agencies, enterprises and individuals. The discontent in the U.S. has reached a tipping point, and the country is primed for an outburst, catalyzed largely by Trump’s provocations and smears.

Beijing and Washington once tackled problems on their own merits, which meant frictions in trade, finance, military, security and politics were addressed in a professional manner. However, even slight friction now is likely to raise overall tension. For instance, the economic and trade frictions last year have brought bilateral ties to the brink of collapse, and Washington has made clear that it doesn’t like China’s creation of a national security law for Hong Kong. Voices in both countries have evolved dramatically, highlighted by escalating nationalism.

Moreover, while it’s clear by their sheer scale that China-U.S. competition underlies the countries’ strategies, it is increasingly difficult to fully understand the scope, scale and intensity of frictions in detail.

• Rivalries are no long specific.

In the past, when China implemented its U.S. policy, it would treat the U.S. administration, Capitol Hill, the military, states, advisory groups, the industrial and commercial community and the general public differently under the principle of “unite with all forces that can be united.” It could downplay or even ignore some extreme anti-China voices. Since there are limited channels now, differentiated approaches are impossible. In other words, China-U.S. relations have become a concern across all sectors and all people on both sides, rather than a concern for relatively small groups; and they have been further hamstrung by public opinion and manipulated by media and several special “media influencers.”

The changing nature of China-U.S. relations and the emerging political correctness featuring competition, containment, rivalry, and retaliation in the two countries have not only hindered the voice of cooperation but also limited the options for risk management in a crisis.

• The most resilient bond has been severed.

That bond is the close personal relationship of the two countries’ leaders. It was taken for granted that even if head-of-state diplomacy cannot serve as a booster for cooperation, timely dialogue between the leaders of Beijing and Washington can pull relations back from the brink in response to any emergency. As a result, we have believed that communication between the top national leaders can solve everything.

In the past year, however, the Trump administration has turned to rhetoric that makes distinctions between the Chinese leadership, the Communist Party of China and the Chinese people, and has also begun to draw up a sanctions list against senior Chinese officials in certain spheres. The “U.S. Strategic Approach to China,” outline issued by the White House on May 20, makes clear that Washington intends to target the Chinese system and leadership, which means that China-U.S. relations are on the same path as U.S.-Russia relations.

Certainly, an issue of political philosophy exists. We had thought that both China and the U.S. sought to prevent their strategic competition from evolving into a battle over their respective models, systems, values and ideology, but now the trend seems inexorable.

Before the COVID-19 pandemic, many in the U.S. had believed that the rise of China was increasingly eroding Washington’s influence and leadership. Given the stark contrast in the performance of China and the U.S. in response to the novel coronavirus, U.S. strategists may have realized that the Chinese model, and the maintenance of its own sustainable development and handling of public security crises, had provided other countries with an alternative, and that China’s rise is not only a challenge to U.S. interests and its global position but also a threat to the stability of its system and its ability to export of its values. In short, China has placed U.S. global leadership at risk.

Washington has never ceased its attempts to subvert China’s socialist system. The Trump administration’s distinctions between the Communist Party of China and the Chinese people has raised China’s suspicions, and the struggle against the U.S. has once again become an issue of basic political legitimacy.

Great importance should be attached to the changes listed above, which indicate that China-U.S. relations have evolved in terms of interests, structure and strategies. Further, in light of overlapping events in the short and medium term — the U.S. presidential election, COVID-19 pandemic and China’s changing perception of the outside world — specific incidents, rather than natural development, will serve as the fundamental driving forces shaping future Beijing-Washington relations. Therefore, China-U.S. relations are more likely to spiral out of control.

In other words, no matter how U.S. domestic politics and external situations may evolve in the future, all sectors in the U.S. have decided to grapple with the rise of China in a more explicit and tough manner. Measures that previously could be employed to work out the contradictions and differences between the two sides have failed one by one. The right wing, whose voices dominate the White House and Senate, and which echoes from a minority of the public in the U.S., has both the power and motivation to plot emergencies designed to build a new framework of China policy that future administrations will find difficult to change.

At this point, Beijing and Washington have stepped onto a sensitive stage, and any technical response to specific issues may affect the overall picture. In the fierce China-U.S. game, Washington might intensify its rhetoric for the coming U.S. presidential election. Unexpected moves will appear from time to time, and nothing is impossible.

The situation will become more risky over the next five months. Whether the incidents that arise in that time frame will set the tone for China-U.S. relations in 2021 and afterward depends not only on what the U.S. side will do but to a larger extent on China’s responses and choices. It will be an unprecedented test of our intentions and capabilities.

U.S. tradition and practice in the past was to contain the former Soviet Union, and it’s no different with respect to today’s Russia. The U.S. imposes mental and practical deterrence on its rivals and forces them to overconsume their power on a predetermined path by using narratives (Reagan’s Strategic Defense Initiative, for example) and heavy investments in key competitive fields (Apollo 11 program).

If Washington adopts this tactic with China, the unexpectedly popular theories (“China threat” and “China challenge”) that have prevailed in the U.S. will have a bearing on public debate in China. Ultimately, they will shape China’s decision-making. For instance, the repeated sanctions against China’s tech giant Huawei are more than attacks to China’s scientific and technological competitiveness but rather attempts to stifle China’s will and use of its opening-up policy. All things considered, what the U.S. wants is a total decoupling.

Three scenarios suggest themselves for Washington’s China policy after the 2020 presidential election:

First, Trump could win reelection with a softer China policy, in which case tensions between the two nations might be eased more or less.

Second, Trump could win reelection with a hardline China policy, throwing China-U.S. relations into a state of confrontation.

Third, Biden could be elected, with a Democratic Party less aggressive against China and willing to repair relations with allies and partners for multilateral cooperation.

If Biden wins, it is likely that Beijing-Washington tensions will ease. However, if bilateral relations plummet over the next five months, it might be extremely difficult, even for the Biden administration, to adjust U.S. China policy.

China-U.S. relations are so important that they cannot risk being reconstructed by each other. We should avoid playing the game on the predetermined track set by each country but rather strive to take the initiative in defining the agenda and allowing more space for strategic movement. There is no need to respond to every move by our rival. However, when its moves threaten our core interests, we must counteract them appropriately. The more impatient the U.S. appears, the more levelheaded we should be; the more careless the U.S. becomes, the more careful we must be in practice; the more confrontation the U.S. seeks, the more in-depth understanding of the bilateral relations we need. While engaging in this growing strategic struggle, we cannot give up sincerity in trying to reset China-U.S. relations.

Against this increasingly complex backdrop, we need to review the downward spiral in China-U.S. relations in the previous stage as soon as possible; consider what can be done and what cannot; what to do more of, what to do less of, what to do quickly, and what to slow down. In this way, we will improve our strategy toward Washington as we delegate responsibility to all levels.

Moreover, we need a short-term strategy for the next five months, which I believe can be described as “reasonable response, universal adaptation.” This is of paramount importance, and the outcome will influence how much leeway remains when projecting a longer-term U.S. policy. That longer-term strategy should be characterized by “active action, active shaping,” which should contribute to a new relationship featuring coordination, cooperation, equilibrium and stability.